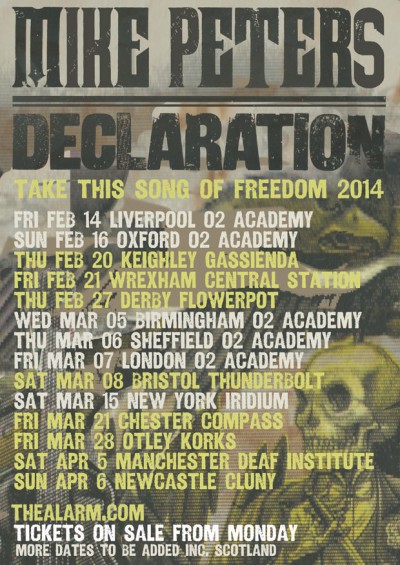 Mike Peters Declaration Tour has been extended to include the following venues around the UK.

More dates will be added including Scotland and South Wales very soon.

Tickets for these new dates will go on general sale from Monday 11th November.

The dates below are all currently on sale at www.ticketweb.co.uk

‘Third Light (Live KBFH)’ [4:06] (MacDonald/Peters), The AlarmLead Vocals:Eddie MacDonaldLyrics: “This is called Third Light” Your head on my shoulder two months you�ve been a soldier I feel so sick inside, two months and you�d have been alive So here I stand by your graveside the steel helmet lies upon your cross They said you died for king and country but that�s no comfort to the life you�ve lost WHITE [read more]