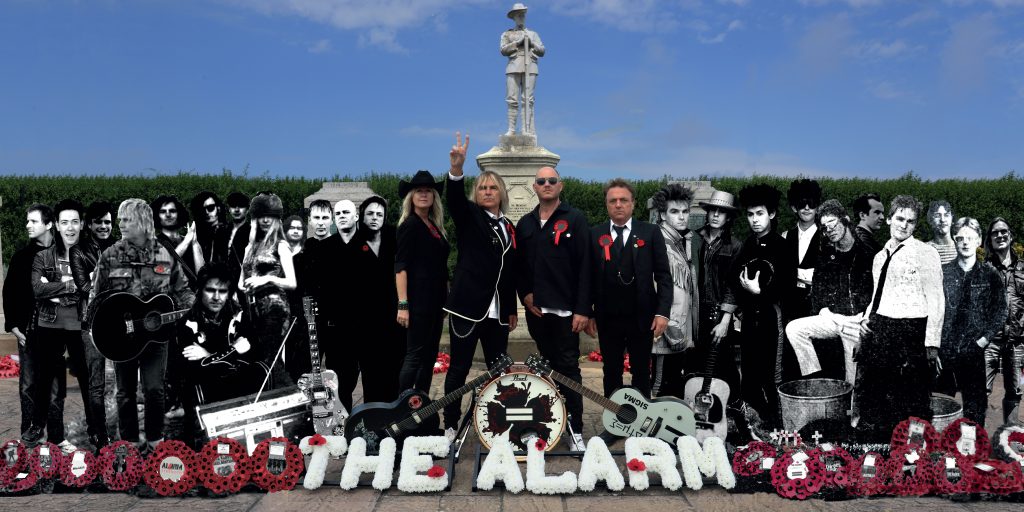 It’s June 5th 2021 and I’m about to live play to over 4,000 people at Cardiff City Stadium, the first artist to perform to thousands since Lockdown began in March 2020.

It’s a long way from performing the very first Alarm show, exactly 40 years ago at the Royal Victoria Hotel in Prestatyn. I know, because I have just spent the last 12 days literally hiking the distance of 177 Love Hope Strength miles from Prestatyn to South Wales – physically connecting the past to the future.

Along the way,  I have been able to reflect on the entire momentous journey from there to here with immense pride.

It’s incredible to think how much we still have going for he Alarm, exactly 40 years on. We are still releasing brand new music, you can buy the records in stores all around the world and listen them over the internet. Our online presence  is growing and new fans are discovering the music every single day. Eddie Macdonald (who played on that first ever show with me),  can still be seen singing his heart out on our new song The Red Wall of Cymru and Dave Sharp will be joining us at St. David’s Hall in Cardiff on January 21st when our future begins in earnest.

Last night, James Stevenson, Smiley, Jules and myself performed for the BBC on top of the brand new BBC Wales building in Cardiff. Tomorrow we perform on a BBC TV show (which will broadcast on Tuesday evening) that is called the ‘Big Kick Off’ and tonight at 11pm there is a special ’40th Anniversary Mike Peters presents The Alarm’ show broadcasting from Cyfarthfa Castle live at The Alarm Central.

That is why I can say with certainty, that the future stars here, and by looking forward we can still enjoy the past as intended. When I sang “Rebuild your life, rebuild your home, rethink your values, rethink yourself right through” during Unsafe Building 40 years ago, those words describe exactly how I have lived life ever since, and exactly as I reflected when I sang “I’m still unsafe” on the last album WAR.

The story of the Alarm as I have lived it,  has been and is currently being told on The Alarm Central  with songs, recollections and observations that have taken me to all the major crossroads and incidents that have affected and shaped the outcome of the story so far….. Together, we have taken on cancer, survived change and upheaval, made mistakes and learnt from them, split up and reunited, made each other laugh and cry and we are all still here……  even those who can’t or aren’t still here, will always be remembered and never forgotten.

I am still as motivated as ever to make great music in the name of The Alarm, to lead the band on to the stages, festivals and venues of the world where we can share the spirit of the band anew. In 2022, we will take the music around he world once more, we will host Gatherings and release a new album. History Repeating is being made available from today and musically documents where we have been and where we are still going,  because The Alarm is and always has been about tomorrow.

I look forward to sharing the future with you.