In the run up to the release of brand new album EQUALS (June 29th), Mike Peters and The Alarm reveal a brand new video for the album’s opening cut TWO RIVERS which is playing at USA’s Stereo Embers Magazine website here.

“The song is a fiery reminder that The Alarm are one of the most durable outfits around and in Peters, they have an iron man of a frontman whose smoldering musical passion echoes his steely will for getting through a world that hasn’t always delivered the kindest of news.” Alex Green – Stereo Embers Magazine

The video for TWO RIVERS was directed by Paul Green and the song has also been made available as an Instant Grat release on all digital streaming services for those who pre-order / pre-save EQUALS here. 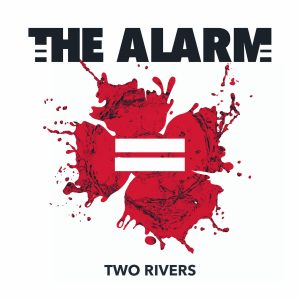 TWO RIVERS is a bold, epic rock number featuring a brilliant, impassioned vocal by Mike Peters. At heart the song’s poignant message is about coming to terms with the past before moving forward to enjoy life to the Full. It perfectly showcases The Alarm’s barnstorming new album EQUALS, which is very much a retrenchment of old values set to a modern beat.

To promote EQUALS, The Alarm are already out in the world playing the new songs and reconnecting with fans both old and new. A resurgent 2017 saw the release of US documentary movie Man In The Camo Jacket and the BBC’s While We Still Have Time. The Alarm also took part in the Vans Warped Tour in the USA and have recently performed at Glastonbury, Carfest and Isle Of Wight Festivals in the UK. Songs from the band’s illustrious catalogue also feature in the soundtrack to Netflix sensational TV series 13 Reasons Why attracting over 1.75 million new listeners to The Alarm’s Spotify page.

The Alarm are currently undertaking a whirlwind tour of concerts on both sides of the Atlantic having just performed two SOLD OUT nights in New York and a second SELL OUT at the James Bridges Theatre in Los Angeles with a 30 date North American summer tour just announced. The band return to the UK on May 26th for a one off Bank Holiday Weekend concert at the 02 Forum in Kentish Town London and a homecoming in Wales on May 27th, when the group headline the Merthyr Rising Festival in South Wales.

This message of Two Rivers is very pertinent to Mike Peters and his wife Jules, as new album EQUALS is a reflection of the tough times they have been through in recent years. Having suffered from lymph cancer in 1996, Mike was diagnosed with a rare form of leukaemia in 2005 and, after an initial recovery, he again relapsed in 2015. To compound an already terrifying situation, Jules was diagnosed with breast cancer just after. All band activity was put on hold as the pair underwent treatment and it is only now, with both in remission, that The Alarm are firing on all cylinders again. The emotional repercussions, though, are all too evident in the spirit of life-affirming optimism in the face of adversity that runs through EQUALS.

With Mike’s health now ‘back on an even keel’ and Jules in remission, The Alarm are already promoting Equals with characteristic vigour. Peters wouldn’t want it any other way. A man who refuses to be beaten, his drive in adversity is truly something special.

TWO RIVERS will be available on Friday as an Instant Grat track on the iTunes and Amazon download Pre-Orders, and on all streaming services.

EQUALS will be released on 29th June and available on CD, LP and on all digital download and streaming services. Pre-Order Equals Here