While the band take a well earned break following the completion of the Pat Benatar tour with some time off in Los Angeles, ‘Absolute Reality’ (The Mike Howlett produced US album version), was released by IRS Records as a radio only promotional single in the USA.

The 3rd single off of “Strength,” released in the USA only, was “Absolute Reality” b/w “Room At The Top.” A 12″ promotional single was distributed as well, including the b-sides “Reason 36 and “Majority,” with an advertisement for the UCLA concert on the cover.. This single was mostly ignored by American radio stations who programmed The Alarm, because they already played the earlier UK single version into the ground. -Steve Fulton, Goldmine 1995

A large advert on the front of the promo single splashed the worlds “Pay Attention” as it described the Spirit of ’86 show that would take place on the 12th of April, 1986. 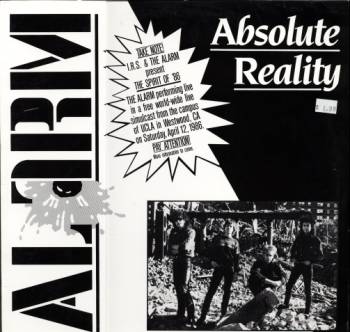 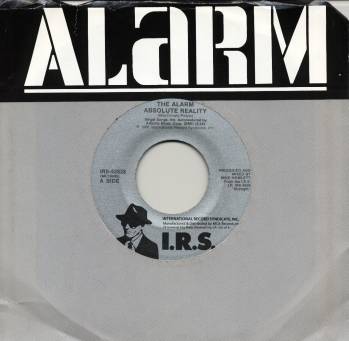 “This started as a small idea, during a chat in a pub,” Peters recalled. ”We thought to do something special around ‘Strength.’ We decided we liked the idea of a free concert, like they used to do in (London’s) Hyde Park. The Stones did one there a few days after Brian Jones died. So we thought, ‘Let’s hold a big free event as a way of giving something back to the audience, something that we can involve everyone in.’ “Groups today are forced into thinking in a regimented way, so a lot of them become very cliquey and closed. It’s time for musicians to give something back. We were lucky when we started that we were given a big hand by U2; they brought us over for the ‘War’ tour. We’ve tried to keep that thing going as well.” The Alarm might want to call this “The Spirit of ’76,” but it sounds more like the spirit of ’67 to us.” – Jonathan Taylor, Daily News of Los Angeles (CA) – Friday, April 11, 1986

The “Spirit of ’86 show” as it was designed, was not just a showcase for The Alarm, but also a re-entry into the video market for IRS records. 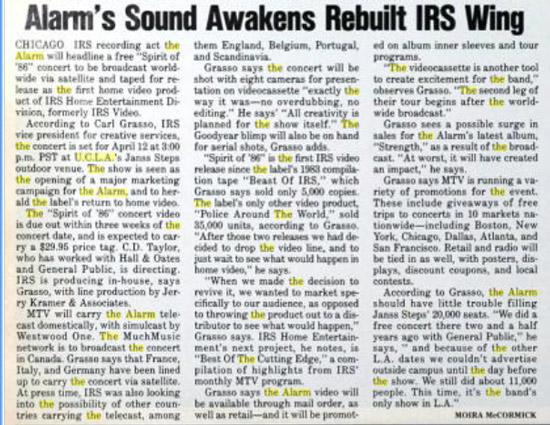 A lot was riding on the concert, and The Alarm spent the first days in April 1986, preparing for their biggest event to-date.

April 8th 1986 The Alarm Stockton, CA Cancelled due to illness

‘When I got off the plane, I must have looked like an extra from “Planet Of the Apes”. Everyone looked very worried and when I caught a glimpse of myself in the mirror, I could see why. My face was swollen up beyond recognition, I was suddenly very concerned. The tour manager took me to hospital in San Francisco and they did a scan to see if I was suffering a brain tumour or something. Luckily, it turned out to be an inflamed absess behind my nose.” – Mike Peters

“When I got back to L.A., I went to see the most expensive “Ear, Nose and Throat Doctor” I could find, amazingly he told me to rest, and push sugar up my nose. I couldn’t believe it, but I was desperate so I did as he said. At first nothing much happened and I was feeling fairly skeptical about the whole thing. – Mike Peters

Even with Mike Peters in  questionable health, the press for the event pushed right up until the last minute.

“The Alarm wants to repay its local fans with a free concert Saturday afternoon at UCLA. It should be a simple affair between this earnest rock ‘n’ roll band from Wales and its few hundred local fans, right? Wrong. You see, the group also wants to repay its fans in the rest of the United States, not to mention Japan, England and 10 other countries. Since a series of free concerts around the world could be exhausting — not to mention expensive — the Alarm is bringing the world to them. The Alarm concert at 3 p.m. Saturday at UCLA’s Janss Steps — dubbed “The Spirit of ’76,” after the group’s latest single — is being televised live around the world. MTV will handle the broadcast in this country, as will the Westwood One radio network. The concert, which is expected to draw up to 20,000 people to UCLA — think of the parking! — will be released on videocassette in three weeks.”  –Jonathan Taylor,  Daily News of Los Angeles (CA) – Friday, April 11, 1986

“On the day of deciding whether to cancel the show or not, I went for a final check-up. On the way to the doctors the absess broke, it wasn’t a pretty sight, but thanks to that doctor and an enormous ammount of sugar intake, it meant the “Spirit Of ‘86” concert could go ahead.” – Mike Peters

“SOUNDING THE ALARM: Free daytime concerts are a common occurrence at UCLA, but this afternoon’s appearance by the Alarm should draw a bigger audience than usual-about 20,000 fans in person and millions more via satellite, hopes sponsoring IRS Records. MTV will broadcast an hour’s worth of Alarm nationwide beginning at 3 p.m.; 13 other nations will get to see it live or by tape delay, and a large radio syndication network will air an audio version in about two weeks.” – Chris  Willman,  Los Angeles Times 12 Apr 1986

PLEASE TUNE IN TO THE ALARM YOUTUBE CHANNEL TONIGHT AT AROUND 9PM EASTERN US TIME …. WHILE THE BAND ARE ON STAGE AT THE NEW YORK GATHERING IN THE GRAMERCY THEATRE…… FOR THE WIDESCREEN PREMIERE OF THE ALARM SPIRIT OF ’86 CONCERT.