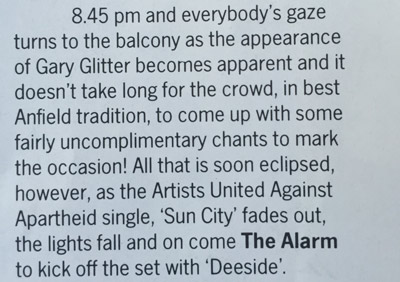 “While we were in the dressing room, we became aware that Gary Glitter was in the royal box of the venue lording it over the crowd who were in turn giving him plenty of stick. He had been due to play at Liverpool University the next night and had obviously turned up to create some publicity for himself. Even then there was a seedy side to him that you couldn’t take seriously so we just left him to it although he did manage to build a new career for himself not long after. During the encore I was singing ‘The Stand’ completely unaware that Gary Glitter had walked out on to the stage behind me, I remember thinking “Why is Twist playing the Glitter Band beat? Before I could turn around, Gary Glitter was on the microphone exhorting the audience to chant along with the infamous ‘Come On Come On’ from his Glam Rock hit ‘Leader Of The Gang’. It was over almost before it had begun and as soon as he left the stage he disappeared back to from where he came…. very surreal”. – Mike Peters 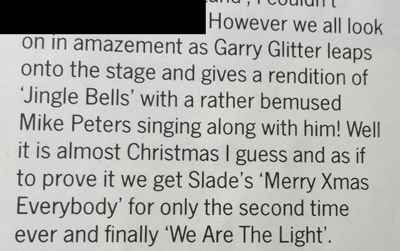 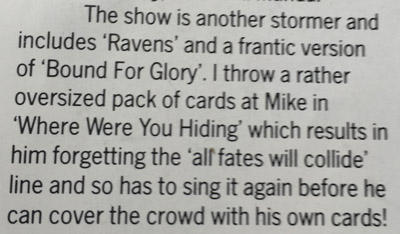 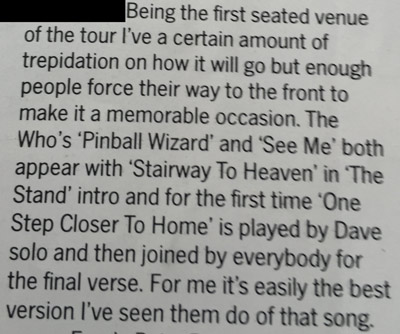 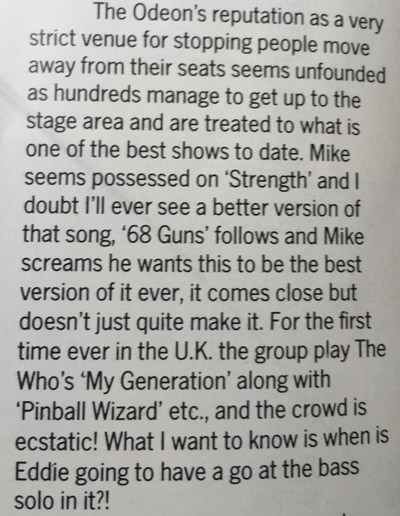 “This night coincided with the launch of the comedy fundraising ‘Red Nose Day’ which was founded by Richard Curtis in 1985 and now an annual British institution. We had a fundraising option for fans on the way in to the show that involved making a donation and then putting song suggestions into a bucket that The Alarm would draw from during the encore and play whatever song was suggested. We thought it would be all ‘Alarm’ songs….. When it came time to make the draw on stage, the ticket pulled out said ‘Like A Virgin’ by Madonna but we lost our nerve (as we had no idea how to play it), and so, said it read ‘My Generation’ by The Who (which we knew how to play).” – Mike Peters 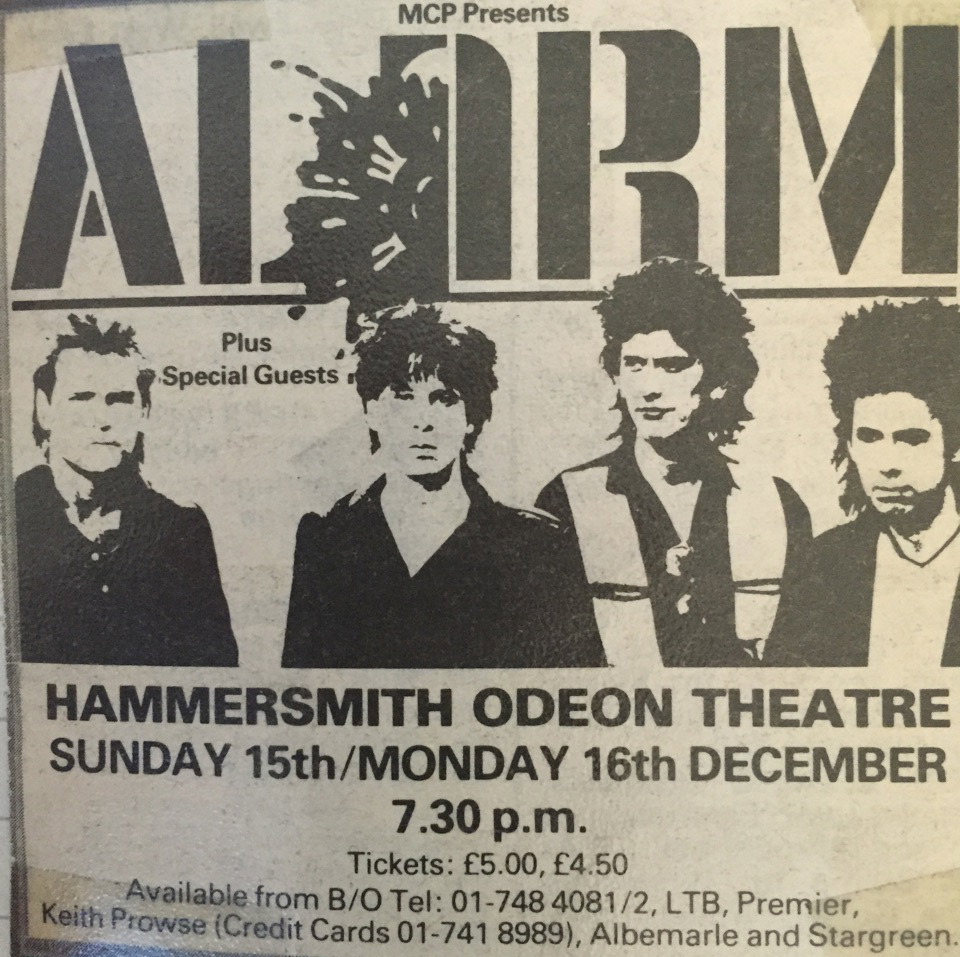 “Time is approaching for The Alarm to go on stage and I start to realise that it’s going to be a re-run of the previous show The Alarm played here (Hammersmith Odeoan), in May 1985 when the security would have been better suited to a P.O.W. camp. My fears are confirmed as the group hit the stage. I’m in the second row, next to the aisle, and was I going to be allowed to move 6 inches from my seat? No chance at all. A slovenly security guard from the dubiously named ‘Seemore Security,’ sits with his foot across the aisle watching for the slightest movement – so much for ‘For Freedom’, when you can’t move two feet forward to the barrier without endangering your face! It fortunately doesn’t take long for Mike to suss that a lot of people have paid over £5 to come out and enjoy themselves tonight, and before Absolute Reality, he requests the security to stand aside and let people stand up the front, Needing no second bidding I dive forward…. 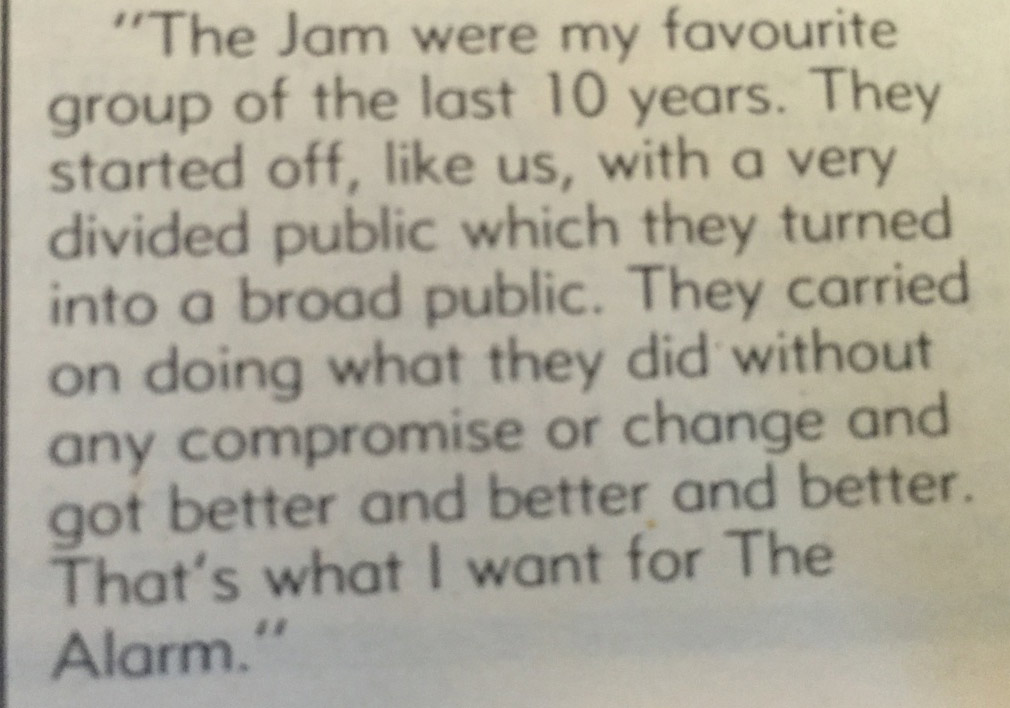 With all the feelings of anger frustration blown out of the window, I begin to enjoy what is an excellent show, not outstanding but rivalling any of the bets shows by any other band. ‘Sixty Eight Guns’, ends the first part of the set and I await the encores with high expectations, but nearly find myself in a fight and worse than that actually ‘wanting’ to be involved in it. Yes of course, Seemore Security have to make a futile gesture of their power and as the group leave the stage the security try to push everybody back into their seats. I despairingly get pushed back just ion time to see Frank literally thrown by two bouncers into the aisle and other being manhandled back from the stage. No surprise perhaps that just to my left, a fight begins and as an oversized bouncer begins to hit teenage Alarm fans, adrenalin starts to flow at a alarming rate and the general out cry goes up. the group returns and remaining oblivious to the events below them, start the encores with ‘Father To Son’. As the fight continues, many of us stand on seats, yelling and indicating to the group what is happening until Redeye and Simon spot something is up and come rushing across the stage and into the crowd, pulling the bouncers off the fans being attacked. Mike spots something seriously has gone wrong and screams for the group to stop, then comes straight over to the edge of the stage and demands to know what has happened?

The head of security is summoned up tot he stage and with one fan stood alongside with a broken nose, dripping blood, he fails to convince a single person in the house that the men under his control have acted in anybody’s interests except their own. Mike demands that the security leave the crowd alone and in an impassioned speech that nearly brings him to tears, struggles to find suitable words to describe the way he feels about the entire situation. With the atmosphere in the theatre purely electric and everybody returning down the front, the group have a quick discussion and decide to play ‘The Stand’. There will never be a more committed, powerful and poignant rendition of that song ever again for me – every single person in the entire audience gave their unrestrained and goal support to what came down to a stand against the callous way the security had acted. After leaving the stage to a complete standing ovation, the group return and Mike informs us that the management is going to cut the power and can tomorrow’s show. Enraged, he says quite simply that he’s going to be here and ask how many others will be to? The answer is deafening and it’s quite apparent that a cancelled show will result in about 3000 Alarm fans converging at the venue whether the band plays or not. ‘We Are The Light’ brings things to a conclusion and we start to file out, all discussing the possibilities for tomorrow. The rather exaggerated police presence makes me realise how badly managed the Hammersmith Odeon is if they think we are going to cause any kind of trouble; obviously they have over reacted again.” – Andy Gritton – Alarm Fanzine Number 4 1986

“Arriving in London around 4:30 we find that the show is going ahead – much to everyone’s relief. Someone comes up with some new lyrics to ‘Father To Son’ retitled ‘Bouncer To Son.” – Andy Gritton – Alarm Fanzine Number 4 1986

“We arrived at BBC Studios early ready to perform ‘Deeside’ and ‘Spirit Of ’76’ ‘live’ to promote the new ‘Strength’ album on the BBC’s flagship music show ‘Whistle Test’ (which was literally going out live at 7:30 in the evening). It had been a very intense few days leading up to the TV show and I could really have done with a break to get my voice back up to speed after the two Hammersmith shows. After the soundcheck, Ian Wilson (our manager), suggested I go back to the hotel to take a rest and freshen up for the show and so he drove me back to Lancaster Gate (The Averard Hotel). We set off back to the studios with plenty of time to spare but had not factored in that Queens Park Rangers had a home game (just around the corner from the BBC Shepherds Bush Studios on Wood Lane), that was kicking off at 7:30 also. The traffic was horrendous and so at 7:15 I jumped out of the car and ran towards the BBC. The Alarm were due on first with ‘Deeside’ and we were to be playing live to the nation, the pressure to get there was horrific. I had to run a couple of miles through the traffic at top speed and didn’t even stop at the security gate as I knew where I was going. I jumped the barrier and ran into the studios with the security guards chasing behind me. I could hear the intro music for the ‘Whistle Test’ and saw the presenters and band in position and just made it on to the sound stage where the crew had my guitar all ready to go. I slung it over my shoulder and counted off the acoustic intro. It was absolutely touch and go and I literally made it with only seconds to spare. The BBC were not best pleased and made it known. I got a right telling off from the producer too.” – Mike Peters 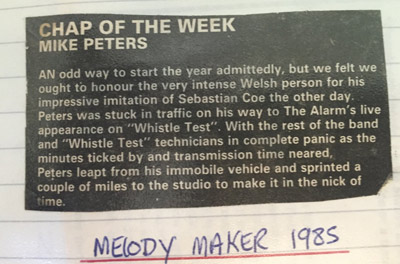 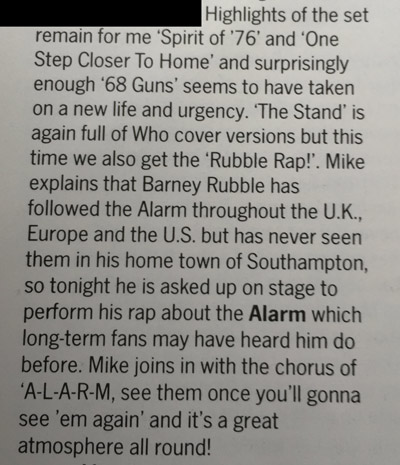 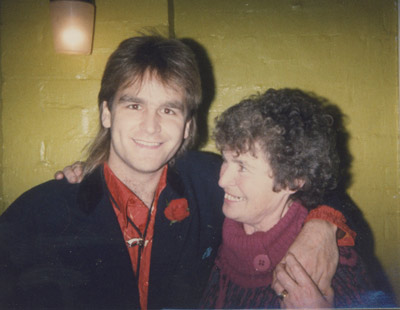 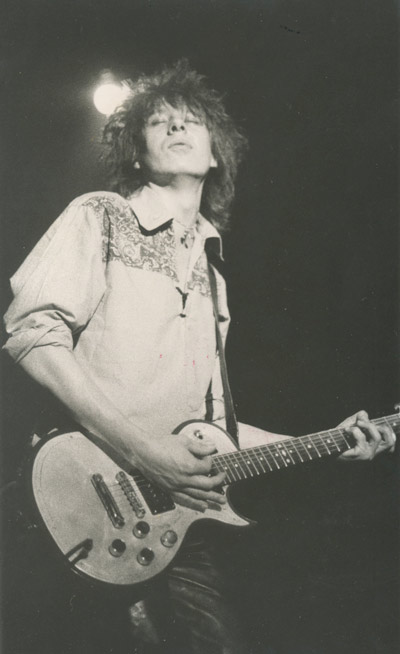 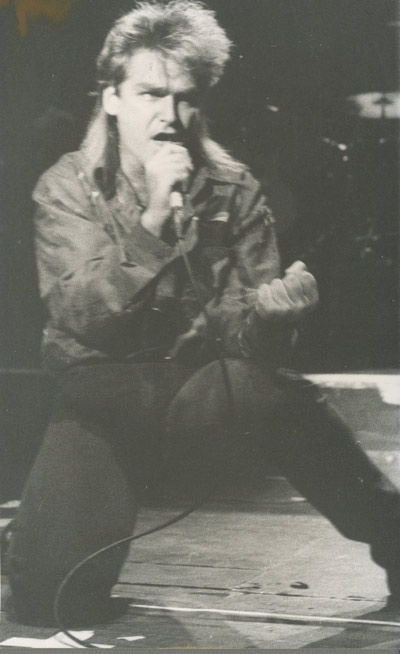 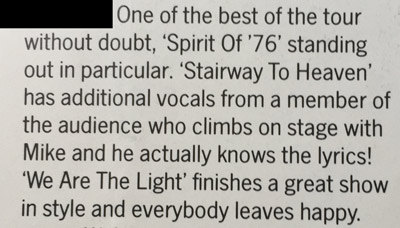 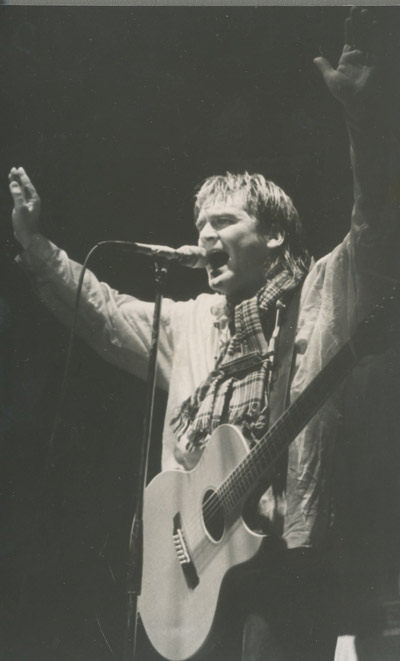 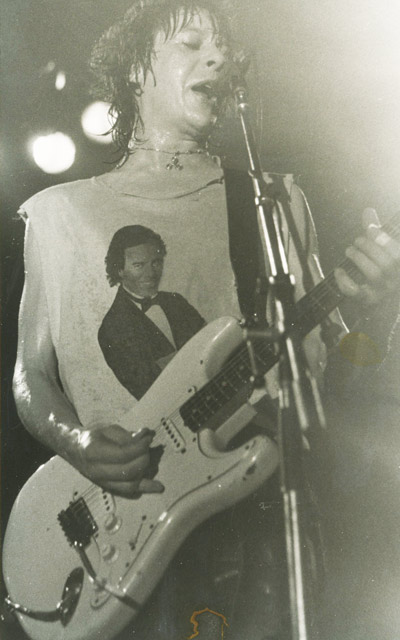 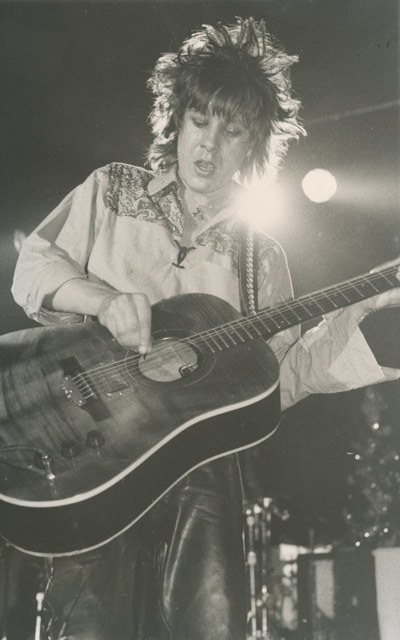 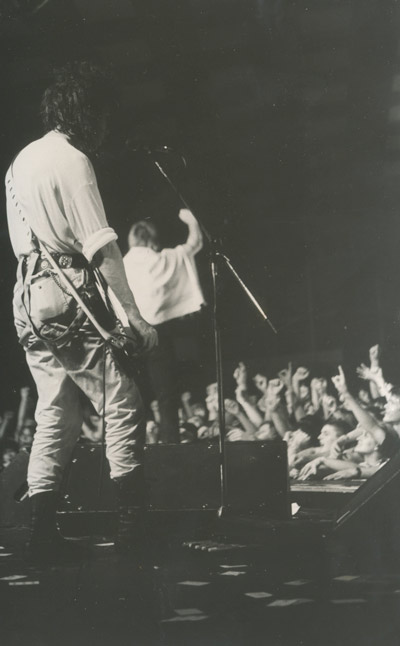 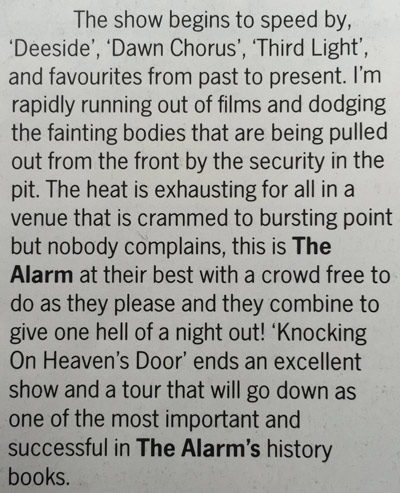 Come back in April when Strength – An Oral History continues into 1986 and the countdown  to The Gathering NYC and the Record Store Day Release of  ‘Strength Live ’85’ continues…..