It has been a very testing week, the kind of which I was most certainly not expecting after last week’s positive outlook.

On Monday, I noticed that the glands in my neck were enlarged, and by Wednesday when I went into the Cancer Centre for continuing treatment, they felt enormous. As soon as I was on the ward the nurses could see that something was not right and called for the Advanced Nurse Practitioner. It was fairly obvious that I needed to be seen by one of the Haemotology Department specialists.

During the morning, I received a further infusion of Rasburicase and was exposed to a higher 200mg dosage of Venetoclax (doubling up from 100mg the previous week), and by the afternoon, I was visited by Dr. Fatima who gave me a thorough physical examination. I wasn’t feeling or indeed looking great at this point, and the glands were making me feel so uncomfortable and even breathing was starting to prove difficult as the swollen glands were pushing down on my windpipe.

Dr. Fatima checked my blood count and although my white count was moving in a positive direction (down from 15-13), my uric acid levels were high which meant I needed to be treated with further infusions of Sodium Chloride to protect me and my kidneys from an infection called Tumor Lysis which (if left unchecked), could prove to be very serious indeed,

Dr. Fatima wanted to keep me in overnight but unfortunately there was no room at the inn! Instead, I received the first part of the treatment into the early hours of the evening and was then allowed home to be admitted once again at 9am the next morning. 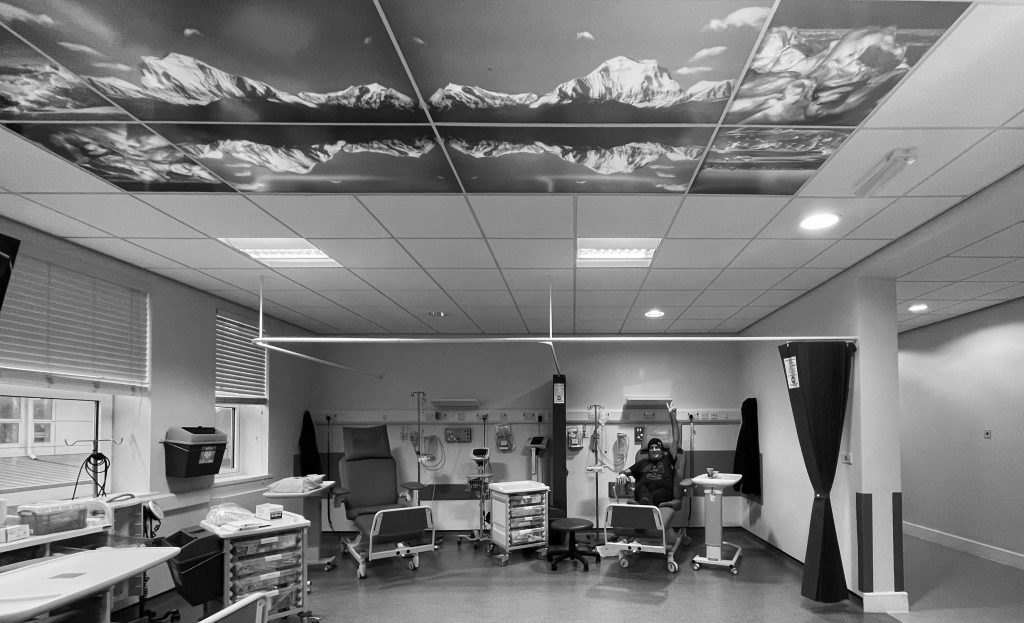 At 9am, I was taken into the Triage Department of the Cancer Centre, canulated into the IV once more and prepped for a full day of treatment. During the afternoon I was visited by lead Haemotologist – the amazing Dr, Heartin, who concluded that my now severely enlarged glands were probably due to the fact that I wasn’t quite receiving the full power of Venetoclax (I had only been on a half dosage for 24 hours), and so Dr. Heartin decided to re-start my old chemo ‘Ibrutinib’, for another two weeks while my body readied itself to accept the full 400mg dosage of Venetoclax (which is such a powerful targeted chemotherapy that it has to be administered over a seven week period starting with 10mg in the first week until reaching the full 400mg dosage by week 7).

Visitors are not allowed into Traige, and so when Jules came to collect me at the end of the day, I could see she was visibly shocked by my appearance and the overall weakness in my ability to walk the short distance to the car. When we got home, I was totally wiped out and to be honest, we were both shaken by the downturn in my health compared to how I felt just a few days ago. Not that we needed it, but it was a proper wake up call to the reality and severity of the situation.

Jules was doing her utmost to stay strong as I recounted what had been told to me by the doctor, and it was tough to fight back the tears. The fear of the unknown in these situations is so powerful and no matter how much reassurance I can summon up, appearances do not lie and for Jules to have to witness me in such a sorry state was not what I envisaged when we first fell in love and vowed to grow old together. Jules was amazing as ever though and once she had grasped the situation took to nursing me through the dark night into morning so that I could be admitted into the IV Suite at Llandudno Hospital for another full on day of immunoglobulin therapy. The nursing team were amazing and looked after me all through the long day into night.

Cancer is a devilish beast, it is a constantly moving target, continually trying to deceive the mind and body into false security so it can rise up and try to destroy you from a different direction. Personally, I believe that by staying positive you empower the healing strength of the scientifically produced chemicals and drugs that are designed to contain the cancer and inhibit its power to destroy. To have love in your life is also part of the armour of protection and Jules’ gives me everything she has every day we have managed to stay alive. Hope is also vitally important and that comes from being able to look beyond the terror of a moment and into the future and the days and hours that lie ahead, and as long as there is a sunrise to look forward to then there will always be hope. Strength comes from within and from your immediate and extended family, and I am blessed to have an army behind me, the messages of support keep coming, and I am grateful for the angels, the football magazines and the letters and messages that tell myself, Jules, Dylan, Evan that we are not alone in this for one second.

I am writing this on Sunday morning, and the healing process of these incredible miracle drugs that I have been prescribed with, have brought the glands back down to almost normal levels again. It feels like we have navigated a dark passage and emerged into the light once more.

There is still along way to go until I take to the stage at The Gathering on January 27th and I’m sure there will be more bumps in the road, but I am focused on recovery and want to thank each and everyone of you for being with me in spirit.