Mike Peters begins his three night stand at the Iridium on Broadway on Saturday 26th July with two shows at 7-30 and 10-30.

You can also catch Mike live on air from 2100 (EST), on New York’s Q1043 this Sunday evening with DJ Jonathan Clarke. 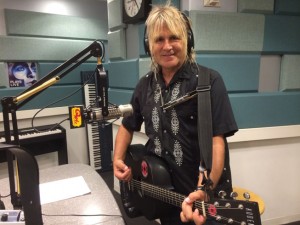 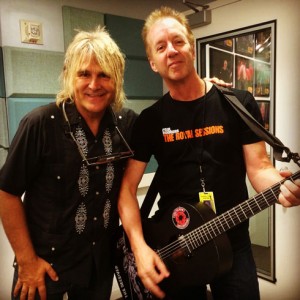 Mike Peters will play a second set of shows at the Iridium, Broadway on Wednesday evening July 30th when he will be performing songs from the ‘Strength’ album followed by a night on Long Island at My Fathers’s Place on July 31st. A third and final evening (with selections from Mike Peters’ entire songbook), will take place on Broadway at the Iridium on Saturday August the 9th.

Check out this great review by Frank Jansen from Mike’s recent appearance at Bospop Festival in Holland. 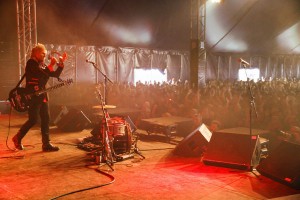 The Alarm Sounds Again… but not how you may expect!!!

Bospop Festival was not expecting The Alarm concert that was received so warmly on Saturday July 12th in Weert, Holland.

At 7 o’clock p.m., lead singer Mike Peters arrived alone onto the stage armed with only an acoustic guitar (intriguingly named The Deceiver), and instantly proceeded to scratch out a rhythmic opening to the first song. Resplendently dressed in black jacket with iconic red poppies embroidered on the sleeve, his black motorcycle boots tapped at a bank of foot pedals while the guitar pattern was repeated in stereo across the speakers. With hands free, he swung a tambourine across the microphone which added to the rhythm that was starting to draw more and more people into the Big Top Arena to see what was going on.

As the audience picked up on the vibe and began clapping along in unison Mike Peters trapped the beat and strode to the front of the stage and with foot on the monitors, struck a classic Alarm pose and strummed the intro to ‘Shout To The Devil’. With a howl drenched in echo, drums burst into life and a wall of sound came from the PA system that had the whole crowd moving to the dark acoustic folk rhythms. It was a dramatic entrance and with a voice that has obviously improved with age it was an Alarm sound instantly recognisable yet reborn and refreshed.

The drama continued into ‘Where Were You Hiding When The Storm Broke?’, another song from ‘Declaration’ whose styllistic artwork dominated the back of the stage while the lights exploded around the sound of the “Four Winds Howl”.

All the Alarm trademarks were in evidence throughout this opening salvo, the guitar held high, the harmonica and playing cards filling the sky. A lot of people were being caught up in this whirlwind of sound and vision straining to watch, as Mike Peters worked the stage left, right and centre. So different visually from anything else at Bospop, yet still as rock and roll as the classic vox, guitar, bass and drums of most acts represented throughout the weekend.

A song I did not recognise came next and snaked it’s way into the packed arena. It featured a shuffling groove with a stark blues guitar arrangement that recalled the Black Keys / White Stripes stripped down approach . ‘The Stand’ followed with its acoustic strum stirring the crowd. This is the song that introduced The Alarm to the Netherlands back in 1983 and played today in a foot stomping style that sits comfortably with the audience – many of whom have obviously never seen The Alarm before. The instantly recognisable refrain of the chorus rang throughout the festival crowd as Mike Peters continued to drive the atmosphere ever higher with his right foot banging down onto a red white and blue bass drum in true one man band skiffle style.

‘Tell Me’ and ‘Howling Wind’ showed the depth that is still inherent in The Alarm’s Declaration era songs and although some of the people may have come expecting a full band performance you cannot fault Peters determination to keep moving his music forward and challenging his audience. The highlight of the performance was a reworking of ‘Marching On’ that retained all its original anthemic qualities yet had a new pulse running through the heart of it’s acoustic jangle and electric gain.

Mike Peters voice stayed strong throughout and drew the audience ever inwards with every word and syllable as clear as you could wish to hear. The set climaxed with a slow building ‘Sixty Eight Guns’ which again caught the crowd off guard, an extra verse added power to the build up that exploded into life at the middle section. Alarm fans certainly know how to sing-along and the final chorus was played out with a resounding flourish as Mike Peters bid Bospop farewell and left us with one of the most talked about performances of the entire weekend.