We are pleased to present the official thealarm.com photos from the Mike Peters and The Alarm show at the Wales Millennium Centre on the 10th of October 2015.

The show was many months in the making, and featured not only Mike Peters and members of ‘The Alarm’, but the ‘Welsh Pops Orchestra’ (arranged and conducted by John Quirk) and the ‘Acquire’ choir from North Wales who have featured on the recent Declaration and Strength releases. The event also featured a return for ‘The Morriston Orpheus’ male voice choir who first joined the Alarm on the original recording of a New South Wales back in 1989.

There were many highlights, not least when tens of thousands of paper poppies rained down during a moving rendition of ‘In The Poppy Fields’.

The day began with a sneak peak of the forthcoming feature length film, ‘The Man In The Camo Jacket’. The film was presented ‘uncut’ and received a long standing ovation when Producer James Chippendale and Director Russ Kendall of  Kaleidoscope Pictures (USA) came to the stage at the end of the showing. 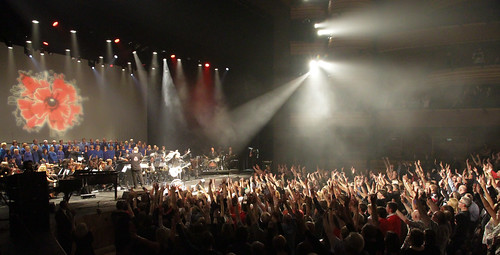