On Sunday November 15th 2015 at the Scala Cinema, Prestatyn, The North Wales Coastline Film Festival presents the British film premiere of Everest Rocks a movie that documents the inspiring story of two cancer survivors, Mike Peters (of Welsh rock band The Alarm), and James Chippendale, (a stem cell transplant recipient from the USA), who together, create a life saving charity from the bonds of friendship. 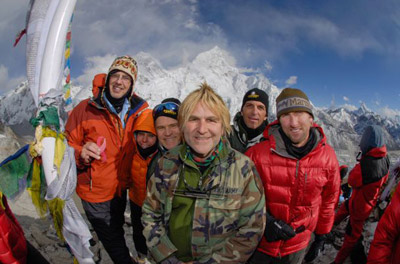 In 2007, the pair set their sights on raising awareness about the need for bone marrow donors to join the international registry by attempting to stage the then ‘World’s Highest Rock Concert’ on Mt, Everest with an unlikely team of legendary rockers from The Alarm, Squeeze,  Stray Cats, The Fixx and other musicians, mountaineers, cancer survivors and friends on the adventure of a lifetime.

This cinematic journey (which was directed by MTV Unplugged’s award winning US producer /director Alex Coletti), involves a 14 day trek to 18,500 feet in the shadow of Mount Everest performing impromptu concerts along the way as they attempt to reach their goal upon the summit of Kala Patthar at 18,519 feet.

The mission of Everest Rocks is also to raise funds to support the Bhaktapur Cancer Centre, Nepal, resulting in an amazing closing concert inside the historic Durbar Square Kathmandu, where the band of intrepid musicians become the first ever western rock artists to play the 1000 year old world heritage site in front of a crowd of over 14,000 (and a live TV audience of over 4 million).

Now firmly established as the world’s leading rock and roll cancer foundation, Love Hope Strength has been endeavouring to encourage as many people as possible to sign up for the International Bone Marrow Registry resulting in over 100,000 registrations and over 2,000 potentially lifesaving matches found.

Love Hope Strength co-founder Mike Peters of The Alatm will be pitching up at the Scala, Prestatyn on Sunday November 13th at 7.00 p.m. to present the film and take part in a post screening Q&A with host Steve Swindon of The Coastline Film festival presentation team.

Love Hope Strength will also be taking swabbings and providing support and information about the Bone Marrow Registry.

Come see a movie and maybe even save a life.