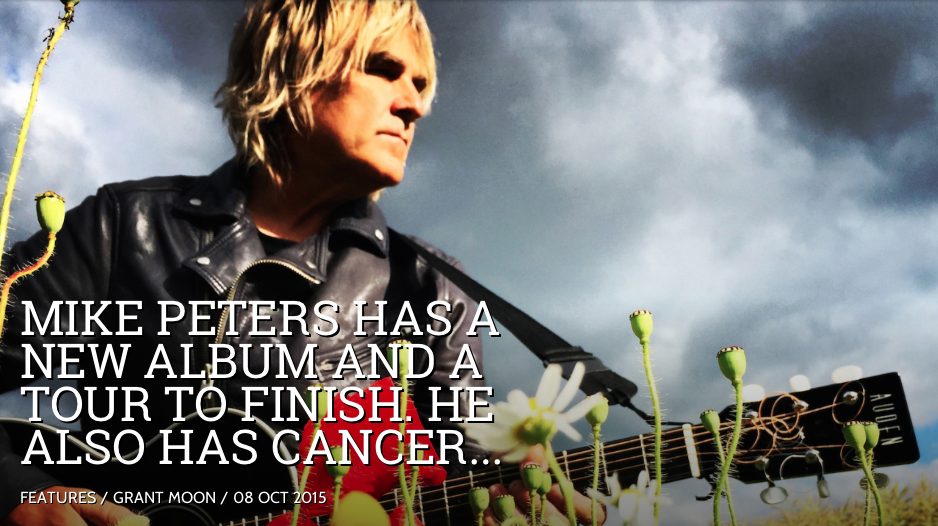 The Alarm’s Mike Peters has a new album, a forthcoming documentary and a massive gig on Saturday. And then there’s the small matter of his returning cancer…

Meeting him you’d never know it, but Mike Peters has leukaemia.

It’s actually hard to keep up with him as he does the rounds at BBC Wales in Cardiff, giving interviews and playing live acoustic versions of Sixty Eight Guns for various radio shows. He gladly shakes many hands, graciously poses for photos with men of a certain age, all keen to express their love for The Alarm and his music (this is home turf after all). One DJ keeps calling him ‘a machine’, and it’s true  – the guy’s a ball of intense energy, full of bonhomie and enthusiasm, his conversation littered with casual asides about his colourful musical past.

Thirty years ago, when The Alarm were recording their second – some would say best – album, Strength, Jimmy Page was in the next studio with the supergroup The Firm, and The Alarm’s guitarist Dave Sharp went awol with him for two days, lost in a haze of axe talk and Jack Daniels. The band supported Queen at Wembley on their Magic tour in ’86, and Peters took the tube to the stadium, because he wanted to get a taste of the fans’ excitement about the show. They were meant to open for long-standing friends U2 at their famous Red Rocks date (captured on Under A Blood Red Sky), but the golden opportunity was nixed by the torrential rain on the day. And when friend and producer of 1989 album Change Tony Visconti heard that Peters’ health was once again in question, he sent him a note that said, simply, “We’ve still got work to do, Mike”. 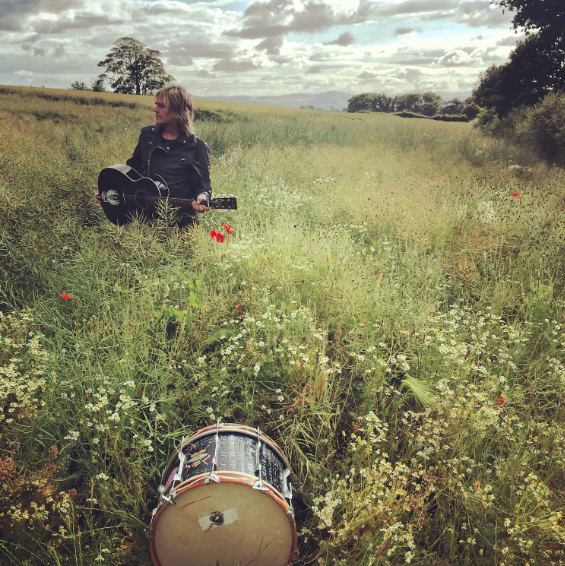 All this press is to highlight the anniversary of Strength (and his new, stripped down re-record of that album), and the ‘once in a lifetime’ celebration of the music of Mike Peters and The Alarm at the Wales Millennium Centre this Saturday (October 10). The evening will open with a sneak preview of Man In The Camo Jacket, a documentary filmed over eight years that captures the history of the band, his continuing struggle with cancer and his hugely successful charity Love Hope Strength, with which he has raised money for (and awareness of) cancer treatment at home and across the world. Yet all this has been cast in a new, darker light since he confirmed that the leukaemia he’s been managing successfully since 2005 returned aggressively for a third time, in June.

“I wasn’t going to talk about it until after the show,” he tells Classic Rock, “but last week some journalists saw I’d been to the hospital and started asking questions. I’m sort of glad because the film takes you into what’s been happening in the last couple of months. I kept a video diary.”

Peters’ body has developed an allergy to Rituximab, the drug (“a smart bomb in your blood,” as he calls it) that was keeping the chronic lymphocytic leukaemia under control. On Monday morning after the show, he’ll be back at the Alaw cancer unit in Bangor, North Wales, to start a new course of treatment. He’s been told people with his strain of the disease die with it rather than of it, so he’s hopeful, but then his positive, combative approach goes back further, to his first cancer diagnosis, back in winter 1995.

“I was doing an acoustic tour of Britain, and I found this peanut-shaped lump on my collar bone. I went to my doctor, gave blood, and when the analysis came back a piece of paper came over the desk with the word ‘cancer’ on it. You just go white cold. I’ll always remember – everything in your life comes rushing in at you – your parents, your wife, your music. It all comes in in a second, and you’re trying to put this all in order and the doctor’s still talking to you.”

When they took the first biopsy, he asked them to take it from the right side of his neck rather than the left, so his guitar strap wouldn’t nick the stitches. The tests came back indicating non-Hodgkin’s lymphoma, with a 50 to 60 per cent chance of survival provided the treatment starts immediately. Against his doctor and wife Jules’ wishes, Peters insisted on completing tour commitments in the US, placating them with the comforting truth that the British light entertainer Marti Caine had also been diagnosed with lymphoma, and was still performing well.

“Four o’clock in the morning we get up to go to the airport, put the BBC radio news on and the headline was ‘Singer Marti Caine has passed away’. At the airport everyone was reading the Sunday papers and that was on every cover. Jules and my tour manager were devastated as they’d clung to this as a lifeline, but I tried to laugh it off, develop a new black sense of humour.”

When you’re in such a vulnerable position, you see everything as an omen, look everywhere for hope. The Alarm’s manager Ian Wilson had given him a book, The Power Of Self Healing and put him in touch with a faith healer. “Her name was Bambi,” says Peters, with a giggle that reassures that he’s aware of the quackery. “I spoke to her on the phone at the airport for 20 minutes, and she said, ‘Mike, I’m hearing you speak and I’m being flooded with green. All I can say is, while you’re in this situation look for green.’ Well I read the book on the plane, and decided I was going to go to war on the cancer when we landed. On the way to Boston we stopped in Connecticut at an army shop and I bought a green camo jacket, green combat fatigues, and it was all going to stay on until I’ve beaten it. I did all the gigs in these clothes, and the fans didn’t have a clue why.”

Six weeks later, two months after diagnosis, he had another raft of blood tests, and his white blood count had gone dramatically in the other, positive direction, in what the doctors called a ‘spontaneous regression’. As we speak to him today, he’s wearing a green t-shirt under his leather jacket.

“At the time, yes, I was going, ‘This is a miracle and it’s all down to Bambi’ and the combat fatigues and this combat zone I’d developed in my mind with positive thought. I saw it as a huge let-off – I thought, ‘That’s it, I’ve beaten cancer and it’s never coming back’. I made the album Feel Free and my life sped up. I got an appreciation for it I’d never had before.”

He continued to work, and formed the band Coloursound with Billy Duffy. The Cult had broken up shortly before and the two had become friends, bonding on hill walks through Snowdonia. They were joined by The Mission bassist Craig Adams and Saw Doctors drummer John Donnelly, and major labels were sniffing around them. “We played South By South West,” Peters recalls, “then a show at the LA2 in London, there was a massive vibe around the band and the place was stuffed to the roof with people, Ian Astbury among them… and the next day the calls started – ‘We want to get The Cult back together.”

The Alarm had been largely inactive since Peters quit the band at the Brixton Academy in 1991. There was a half-hearted re-formation with just Peters and bassist Eddie McDonald returning, and in 2004 they assembled under a fake name, The Poppy Fields, and scored at Top 30 hit with single 45 RPM. The incident was later turned into a movie).

The following year, towards the end of his tour with Dead Men Walking, he broke a road rule and had a few beers at Swindon Arts Centre with the bandmates Captain Sensible and Stray Cats’ Slim Jim. “ I woke up the next morning with the biggest most painful erection of my life. I was doubled over. I thought they’d spiked my beer with Viagra!” They hadn’t. Priapism, as his doctor diagnosed it, is one of the symptoms of leukaemia, and as soon as Peters found that fact online, he knew that the cancer was back.

He was a father now, to Dylan, and on getting home he put on the green fatigues again, and stood in front of the mirror. All the bad times came flooding back (his wife hated seeing him in the garb), and he took it off. After painful yet successful treatment he spent 10 years managing the condition with Rituximab, but after the new diagnosis this June he’s been undergoing tests to find a suitable new medication. “You have to stay positive and active, or slowly slowly the cancer takes over your life more than it needs to, and starts to invade your psychology, your optimism. It’s a long drawn-out process and you get time to ponder, and that can lead to dark passages. For me, my family and my music have focused me and kept me sane.”

This ongoing fight, and the dedication of the NHS staff who have helped him, inspired him to co-found the Love Hope Strength Foundation in 2007. Working with the Delete Blood Cancer agency, the foundation travels to concerts and festivals around the world to encourage fans to ‘Get On The List’, that is to sign up to become a bone marrow donor for cancer sufferers who need a transplant. To date over 100,000 people have signed up this way, and over 2000 matches have been made. “All we want is a cheek swab and some info to track people. We’ve done the Isle Of Wight, Lollapalooza, Bumbershoot. We found 25 matches in Linkin Park’s audience alone, 8 from Mumford And Sons, hopefully through the Foo Fighters. A lot of lives have been saved at rock ‘n’ roll concerts.”

Along with a host of stars, Peters also raises funds for certain areas of the UK and other areas in the world by walking and playing gigs up mountains, from Snowdonia to Ben Nevis and beyond. A Kilimanjaro trek raised hundreds of thousands of dollars, which paid for a children’s cancer unit in Dar Es Salaam. More recently a climb 1000 feet up Everest to Kaala Pathar helped build Bhaktapur Cancer Centre in Kathmandu. Peters reckons that was the world’s highest gig. “It’s tough. You take five or six musicians and say, Right, you sing the first verse, you sing the second, because the air’s thin up there and it’s hard!”

Closer to sea level and to home, this Saturday’s set list at the Millennium Centre will see him take to the stage with the current Alarm lineup. They’ll be joined by the Welsh Pops Orchestra, Morriston Orpheus Male Voice Choir and the Acquire Choir to perform fully orchestrated versions of songs from his own solo catalogue and the ‘classic era’ Alarm, with notable attention given to Strength.

Released in 1985 on the IRS label and featuring archetypal Alarm songs Knife Edge, Deeside and Walk Forever By My Side, the original album has weathered well over the past three decades. Peters describes it as the best album of their 80s period, but he has tinkered – reinterpreting it to suit the times on the new recording. “I went back to the building blocks, the early demos, the original lyrics sheets. I wanted to see, if I was approaching these as brand new songs today, where would I take it. Spirit of 76 is about friends of ours, and I wanted to update their story, I didn’t want to sing about their downfall, I wanted to sing about their resurgence.

“This Saturday means everything to me. I think the band has been made for this moment. After all the ups and downs –  it’s a survival story musically as well as literally, for me as a human being.”

Strength is out now on Twenty First Century Recording Company, and Man In The Camo Jacket will be released next year. More on Love Hope Strength at www.lovehopestrength.org 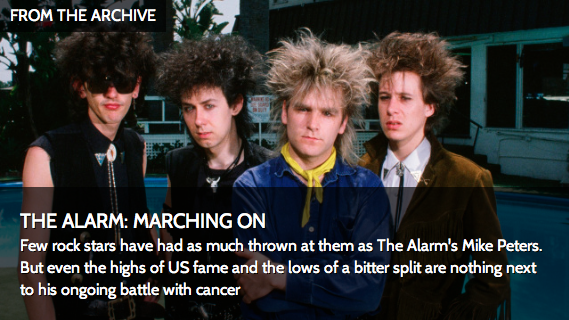