The record will be released on the Slimstyle label in the USA to coincide with an armada of West Coast concert dates beginning at the Crocodile Cafe, Seattle on May 5th and running through to May 10th at the Soda Bar, San Diego.

As always with Dead Men Walking you never know who might just show up on the night, but we can confirm that Dead Kennedy’s singer Jello Biafra will join the band on stage in San Francisco at the Brick and Mortar Music Hall on May 7th and a return to the Troubadour in Los Angeles with DMW alumni Duff McKagan (GNR) plus guest appearances from members of The Pogues and Foo Fighters, is scheduled for May 9th.

A date at Dante’s in Portland on May 6th will be MC’d by Jackass star Danger Ehren and an additional date at the Constellation in Santa Ana will also feature on May 8th.

All the shows will feature original material from the ‘Easy Piracy’ album and a full broadside of hits from the four bands associated with the members of Dead Men Walking – The Damned (Captain Sensible), Stray Cats (Slim Jim Phantom), The Living End (Chris Cheney) and The Alarm (Mike Peters). This band can lay claim to literally providing the soundtrack for a generation, hits include ‘Rock This Town’, ‘Smash It Up’, ‘Prisoner Of Society’ and ‘The Stand’ to name but four……. 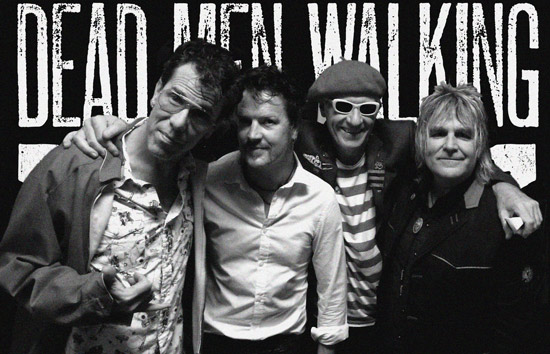