The Alarm – Vinyl Soundtrack album is a collectors edition digipak, complete with full-length 22 track audio CD and a special DVD that features a Mike Peters-hosted documentary, following The Alarm and Vinyl acting star, Phil Daniels, right through the writing and recording of the Vinyl soundtrack (also included are 11 stand-alone videos, including ‘Free Rock And Roll’, which was shot on location at this year’s Gathering). 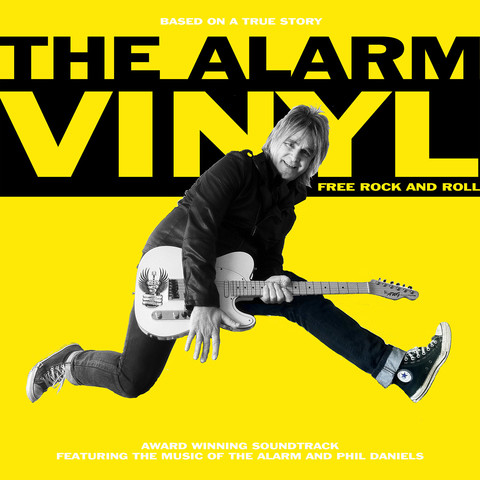 Mike Peters also a gives unique insight into the original ‘true story’ which inspired the writing of ‘Vinyl’, by talking through the events of 2004, with never-before-seen footage from the making of the 45 RPM video and an incredible piece of historic footage that captures the moment Mike and the band heard the chart entry of ’45 RPM’ live over the BBC internet radio at a venue in Belgium. There is also a very special 24 page full colour booklet designed by Karl Parsons that includes press cuttings and clippings from both the original story and from Vinyl itself. There is no better way to become immersed in the whole saga than this.

The audio CD features 22 songs that can all (apart from 45 RPM), be heard in the award-winning movie soundtrack of ‘Vinyl’ and are each abridged by dialogue from the film that captures the spirit of both the true story and the Vinyl plot line.Every single song was chosen for inclusion by director Sara Sugarman, to highlight the drama of the ‘Vinyl’ script as it develops on screen and all 22 songs have been written, recorded or re-recorded especially for the soundtrack CD itself, featuring all the musicians from The Alarm, together with guest vocals from actor Phil Daniels (working in a similar role to that which Phil created so successfully with his collaboration on Blur’s Parklife).

Seven of the songs are from the very origins of The Alarm’s career itself (including a first ever studio recording of the song that gave the band it’s name ‘Alarm Alarm’). These 1977 Mike Peters’ originals were included on the soundtrack at the insistence of movie director, Sara Sugarman, who herself witnessed Mike’s first band ‘The Toilets’ supporting both ‘The Clash’ and the ‘Buzzcocks’ in those early new wave days (Steve Diggle of the Buzzcocks also appears in Vinyl). “Although those songs were never recorded back in the day, I kept a record of the content and was further reminded of their potency when a local hairdresser (Russell Owen) turned up on my doorstep with a cassette tape of one of the band’s few gigs (the only surviving recording in existence). It was an important piece of history for us all to reference whilst recording the songs 35 years later. We concentrated our efforts on preserving the energy and the sonic template of the time by using many of the original instruments such as the very same guitar, amp and effects pedal which I had kept and also playing at the same tempo” says Mike Peters.

Other songs on the soundtrack include the film’s closing statement ‘A Breed Apart’ which on the CD is used as the album’s opener. “‘A Breed Apart’ was written by myself and Vinyl music director Steve Allan Jones (who was with me when I saw The Sex Pistols in 1976 and played with me at my first ever gig before that and also with The Alarm many many times). Sara Sugarman asked us to write a song that captured the spirit of lead character Jonny Jones (played by Phil Daniels). Sara sent me an email with some words that I connected with as a lyricist and from there I went into overdrive. When Phil Daniels plays Jonny Jones on screen in ‘Vinyl’, I see the ultimate survivor which is ultimately how I see myself these days, not only in rock and roll terms, but in the fact that ‘in life’, I have been fortunate enough to have a great marriage blessed with kids and to have survived cancer twice. All of this went into the writing of ‘A Breed Apart’ , both for my family and self as a musician and for the band as an entity with an incredibly loyal fan base who have all had to survive a lot of change and upheaval to get this far. I’m personally grateful for a life lived and still being lived”.