The idea of the bus happened one night when Mike was playing the East Kilbride Arts centre in October 1995. I met a few guys I knew that travel around various gigs to see Mike and were planning on going to the Gathering. We were still unsure on how to get there so we talked about the various options of buses, trains or even car-sharing. However the thought of the drive home wasn’t too appealing.

The following day I called around some local private coach hire companies for costs and with the help from the MPO we had enough people confirmed (that for a minimal fee) we could all travel together on our very own bus!! 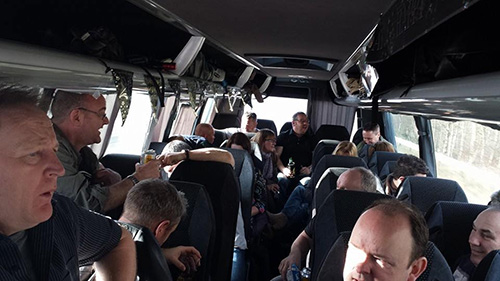 Over the years it has had a bit of a reputation of being some crazy party bus which I must say was true on a couple of occasions, more so on the way home, which is why we all have a day off on the Monday!!!

Anyone that has travelled on the bus will know it’s much more than a bunch of Alarm fans going to a gig, it’s now a group of really good friends going away for a brilliant weekend that also keep in touch all year going to various gigs and festivals together.

When Mike plays Glasgow it’s probably the only time outside of the Gathering where a large section of the audience know each other, having travelled at one time or another on the bus. For us, the Gathering starts at 9am on the Friday and doesn’t end until the Sunday evening…..sometimes late evening.

PS Please note for those NOT using the Scottish Bus…The rail line from Glasgow to Carlisle is still out. They are using shuttle busses from Glasgow. This was due to the flooding in Carlisle