This year’s 30th Anniversary Gathering has now SOLD OUT.

As Mike Peters emerges from a year of daunting life challenges, the 30th Anniversary Gathering (which is now SOLD OUT), promises to be one of the most anticipated Gathering events of all time.

The Gathering 30 will feature an emotional return to the stage for Mike Peters with an Acoustic Performance In The Round on Friday January 27th, and a full on electric set from The Alarm on Saturday evening.

In between these two classic Gathering mainstay events, we have a Friday night Premiere of the brand new Mike Peters’ Documentary BACK TO LIFE and on Saturday evening, we have another very special guest appearance from Dave Sharp. Saturday morning  begins early with a special screening of Tenor on a Mission featuring Mike Peters and renowned Welsh Opera singer Rhys Meirion and a live Q&A with Smiley and James Stevenson that is hosted by Gareth ‘Gaz Top’ Jones. The ever popular Alarm Mastermind will take place at midday with knowledgeable host Richard ‘Modnus Modnussen’ Jones (who was at the very first ever Alarm concert in 1981), and who is always prepared to test the audience with some interesting facts, amazing spot prizes and illuminating questions that can test even the most ardent of fans.

At 2pm on Saturday January 28th, Mike Peters himself will take to the convention stage to reveal plans for The Gathering 2023 which also coincides with the 40th Anniversary since the release of The Alarm’s classic debut album Declaration back in 1984. Also on the agenda is news of a forthcoming tour and brand new album release set for 2023. This is an announcement that must not be missed!
Saturday night at The Gathering 2023 gets underway with an intimate reception for the 300 fans who bought their tickets early, before general admission begins at 1900 hours. Dave Sharp will take to the Gathering stage at 2000 before the main event of the weekend gets underway at 2100 when Mike Peters will lead The Alarm on to the Gathering stage.
The Aftershow begins as soon as the last guitar chord has faded and everyone in attendance comes together to celebrate in a way that only The Gathering can do.

On Sunday morning, Love Hope Strength will be hosting the Sunday Morning Walkathon to the Llandudno Pier for an outdoor Gathering sing-along with Mike Peters (weather permitting), before a Hail and Farewell signing / photo session back at Venue Cymru.

1030 – Doors
1045 – Tenor on a Mission – Gathering Film Premiere
Brand new television special presented by renowned Welsh Opera Singer Rhys Meirion who had a dream to play guitar and sing with Mike Peters.
1130 – 30 Minutes with James Stevenson and Smiley.
Live in person interview with Gareth ‘Gaz Top’ Jones talking about James’ and Smiley’s days with Mike Peters and The Alarm and long standing careers as respected musicians and solo artists in their own right.
1200 – Alarm Mastermind with Modnuss Modnusson
Enter a team and test your understanding of all things Alarm related.
1400 – LIVE SPECIAL PRESENTATION with MIKE PETERS
Revealing plans for The Gathering 2024 which also coincides with the 40th Anniversary of the release of The Alarm’s classic debut album Declaration. Also on Mike’s agenda will be news of a brand new album release and tour for 2023. Expect to see and hear something brand new!! This is an announcement that must not be missed!

NB: The ALARM FANZONE is sponsored by Auden Guitars

Walkathon to the Pier and back led by Mike & Jules Peters
Mike Peters to perform acoustic set and Alarm sing-a-long at the end of the pier. 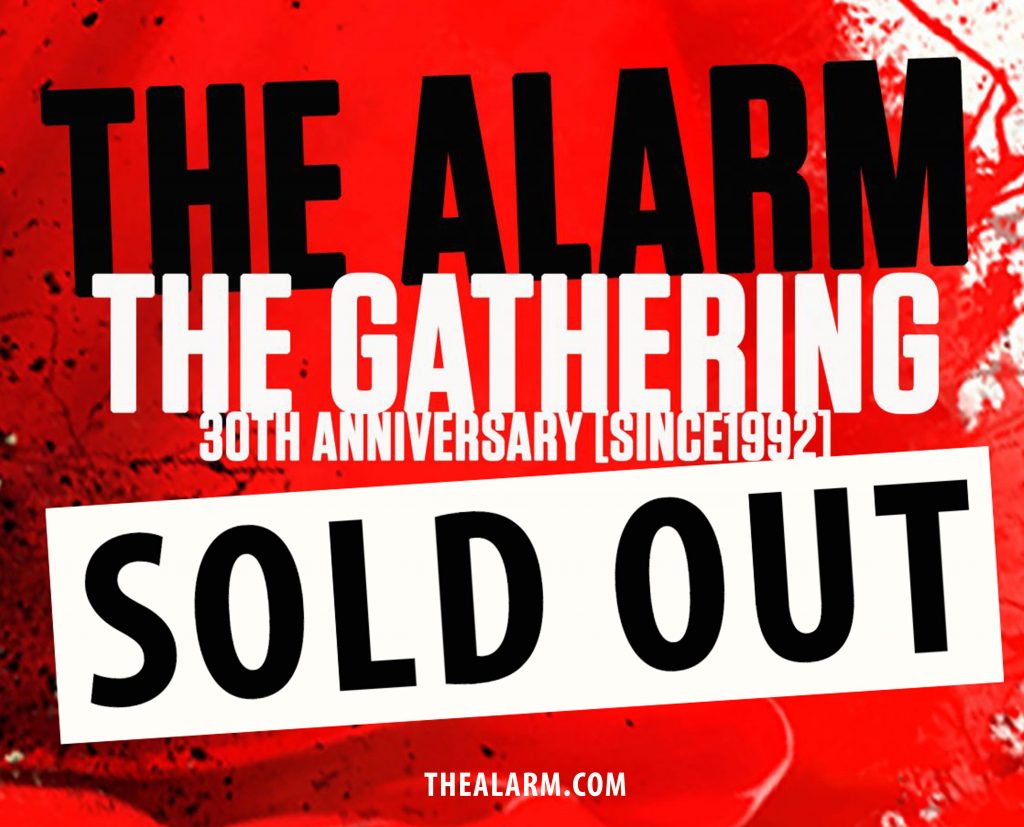