On behalf of Mike Peters and The Alarm, all of us at thealarm.com and the official Alarm facebook page, want to thank each and every person who attended this year’s Gathering 2020 at Venue Cymru, Llandudno.

It was, without doubt,  one of the best on record, and a weekend none of us who were there, will ever forget.

We look forward to sharing plans for The Gathering 2021 and the combined 40th Anniversary celebrations of Mike Peters and The Alarm with you tomorrow.

Until then here’s the first review of this year’s Gathering weekend ………….. (official photos to follow soon). 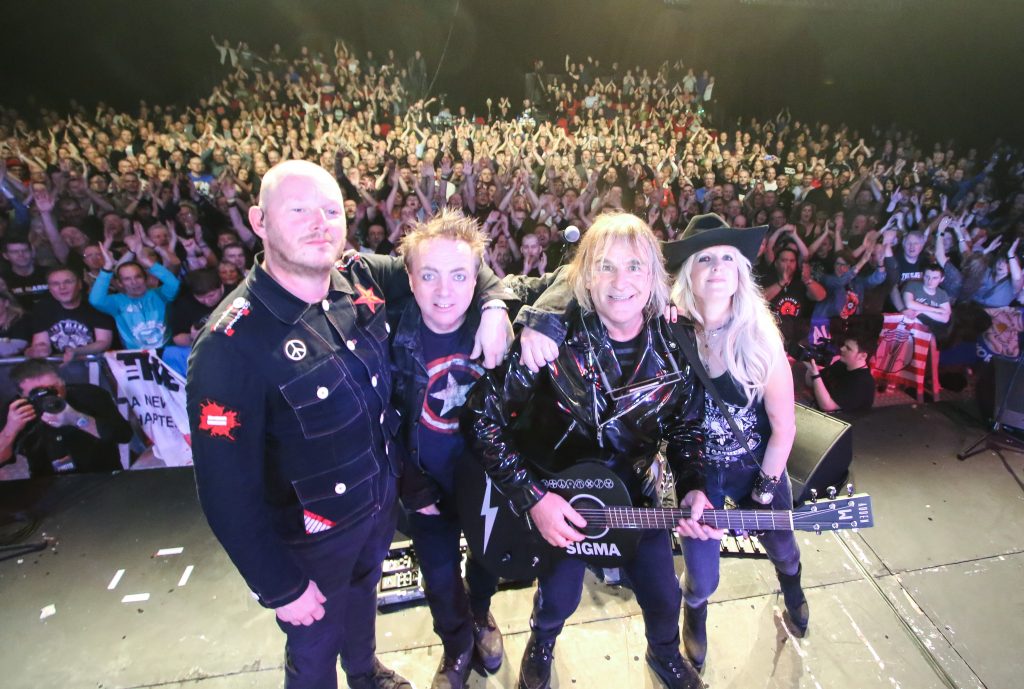 During Act One {Downstream}, a re-eneactment of The Rebecca Riots took place with activists running through the aisles in appropriate Welsh clothing as The Alarm performed a folk-rock style version of ‘Newtown Jericho’. Mike Peters gave an impassioned vocal performance from amongst the audience on ‘Rescue Me’, and created one of the most powerful moments of the weekend. Painted brollies were passed out to the audience members during ‘Rain In the Summertime’ by local TV and Social Media personality Gareth ‘Gaz Top’ Jones (who hails from Holywell), before taking on the role of a Boxing Promoter and introducing a scene involving two appropriately robed fighters emerging into the spotlights and through the crowd under both the British and American Flags. Act One closed with the Alarm’s classic ‘One Step Closer To Home’ which reunited Mike Peters with original Alarm guitarist, Dave Sharp.

After a 15 minute interval, Act Two got underway with Sean Jones’ monologue continuing the narrative, and documenting a return journey – Upstream. There was a powerful political subtext and this was amplified during ‘How The Mighty Fall’, which involved a hilarious Punch and Judy style fight scene taking place on a raised platform above The Alarm’s performance space with Sean Jones taking on the role of John Bercow (former Speaker of the House of Commons), in a spoof Prime Minister’s question time session between Jeremy Corbyn (played by Gareth Jones), and Boris Johnson, who was hilariously caricatured by Gwyn Davies, the former children’s entertainer from Prestatyn.

As the band played on, three huge video screens displayed powerful song-related imagery (created by video artist Gary Overington), adding to the increasing intensity of the atmosphere. It looked and sounded phenomenal, and the power of The Alarm never wavered for a second. During ‘Sold Me Down The River’ a huge sing-along broke out and you could see that the audience were loving being part of the unfolding drama. As the band weaved there way into a powerhouse version of ‘Scarlet’, a delegation of climate change activists dressed in red robes and eerie looking white face masks slowly walked into the auditorium and with Mike Peters’ powerful words ‘I dream in red of all the things that this world could be…. and is not” …  It made a powerful statement, giving all in attendance something to think about and digest as they watched and listened.

The magic of the Gathering’s Love Hope and Strength continued long into the night and spilled out onto the Llandudno Bay as the morning sun shone over the seaside resort. The magnificent Batala drums of Bangor woke up the entire south shore and a throng of Mike Peters / Alarm / Love Hope Strength supporters took their annual Sunday morning fund-raising stroll by the seaside. Mike Peters led the way to the end of the Victorian Pier where an impromptu acoustic festival broke out. Hands were clapped and feet were stomped and the pier was rocked by all. “Look to the future”, Mike Peters sang with a voice still going strong after 48 hours of perpetual use, and after a daunting weekend of change, restructure and renewal, everyone went home feeling a little bit more optimistic, a little bit more hopeful and a whole lot stronger.