The Alarm – On>Tour>Age podcast series is now LIVE and available to be enjoyed here, and also from all major podcast supply services including iTunes, aCast, Spotify, Google Podcasts and others.

Each individual show is presented by Gareth Jones and will take listeners deep behind the scenes of The Alarm and Mike Peters’ solo work.

Mike Peters is also posting an exclusive rock and roll tour diary daily to The Alarm page on Spotify.

The ON>TOUR>AGE podcast series will present a fascinating insight into life on the road with a British rock and roll band and their crew, as they tour the length and breadth of the USA in the summer of 2019 and across the UK in the autumn.

All episodes of the  audio podcast are available here with new episodes being added to this page as they are released:

OnTourAge 018 Sigma Tour Greatest Hits. A look back at some of the most memorable moments for the Alarm’s 2019 Sigma Tour of The United States.

OnTourAge 017 Liverpool and beyond. Gareth chats with Mike at the Epstein Theatre about the importance of this great city to the Alarm and his recent UK solo tour and plans for the band in year ahead. Will The Gathering continue beyond 2020?

OnTourAge 016 The Hurricane Of Change. Gareth joins Mike Peters in Aberdare for the debut of The Stream. We hear Mike’s reaction after the first ever performance of this piece and the fans’ response to this thorough re-working of Alarm material.

OnTourAge015. The End Of The Tour. The tour comes to an end in St Petersburg, Florida and Gareth asks The Alarm, Modern English and Gene Loves Jezebel along with the Sigma tour crew to choose their favourite moments from the last 2 months on the road.

OnTourAge014 The BandWagon. 8 Weeks, 10 people, 1 shower and 1 toilet. Who sleeps face down? Who tends to shove their crotch in people’s face? and who makes all the tea? What is life really like living so closely together for so long, we spill the beans.

OnTourAge013 New York. Gareth tags along with Mike, Jules, Smiley Evan and Dylan for a brief tour of New York City to take in the sights as Mike records something for an up-and coming secret Alarm project.

OnTourAge 012. Meet The Crew Pt2. Completing our profile of the supporting cast of workers who make the Sigma Tour happen: meet Steve the sound man and Jeff, the elusive and enigmatic merchandiser and driver extraordinaire.

OnTourAge 011. Meet The Crew Pt1. Introducing the unlikely team of allies who tune the guitars, drive the wagon, manage the tour, operate the lights: time to meet Adam, Andy and Badge.

OnTourAge010 Billy Corgan. Smashing Pumpkins’ front man joins the band on stage in Cleveland to guest on guitar and vocals during Rain in the Summertime and chats with Gareth & Mike revealing he is a true fan of The Alarm.

OnTourAge009 Salt Lake City & Denver. Evan & Dylan Peters join Mike & Smiley on stage for the soundcheck. We hear from Russ Kendall director of “The Man In The Camo Jacket”. Plus we glimpse behind the scene as the Alarm prepare to take to the stage and hear the conversation immediately after the storming set.

OnTourAge008 San Francisco and Twist. The tour arrives in a part of the USA with strong connections with the Alarm’s Welsh contingent. After the gig at the Recency Ballroom Gareth sits down for a chat with Mike and Nigel Phillips, better known as the band’s original drummer Nigel Twist.

OnTourAge007 Golf and Vanilla Ice. The Alarm kill time backstage before performing to a crowd of 8,000 at the Microsoft Theatre in Los Angeles, and celebrate with friends after playing a storming set.

OnTourAge006 Steve West and prepping for The Microsoft Theatre. In San Diego Gareth talks to a US DJ who supported the Alarm since the beginning, and discusses Mike’s plans for the biggest gig yet on the Sigma tour.

OnTourAge005 Monument Valley & Four Corners. The band and their crew take a few minutes on a long drive between gigs to do a little sight-seeing at a famous American tourist spot. Jules explains why she loves touring and Mike jumps across 4 states.

OnTourAge004 George Gimarc & Walmart. Meet the man who believes the Alarm are more significant than the Clash, and Gareth goes shopping with Smiley at Walmart at 3 o’clock in the morning.

OnTourAge003 Rock ’n Roll Breakfast In America. The team loose themselves in pure Americana at Cindy’s Diner and prepare for a live broadcast from the birthplace of Rock ’n Roll: Sun Studios, Memphis Tennessee.

Christmas comes early for Smiley and Mike, as the band get new drums and harmonicas. Which member of the band travels first class? and who is known as “The little hands of concrete”?….

The tour starts, or does it? Transport issues thwart a smooth beginning to the start of the Sigma tour, but the team know how to keep the show on the road…. 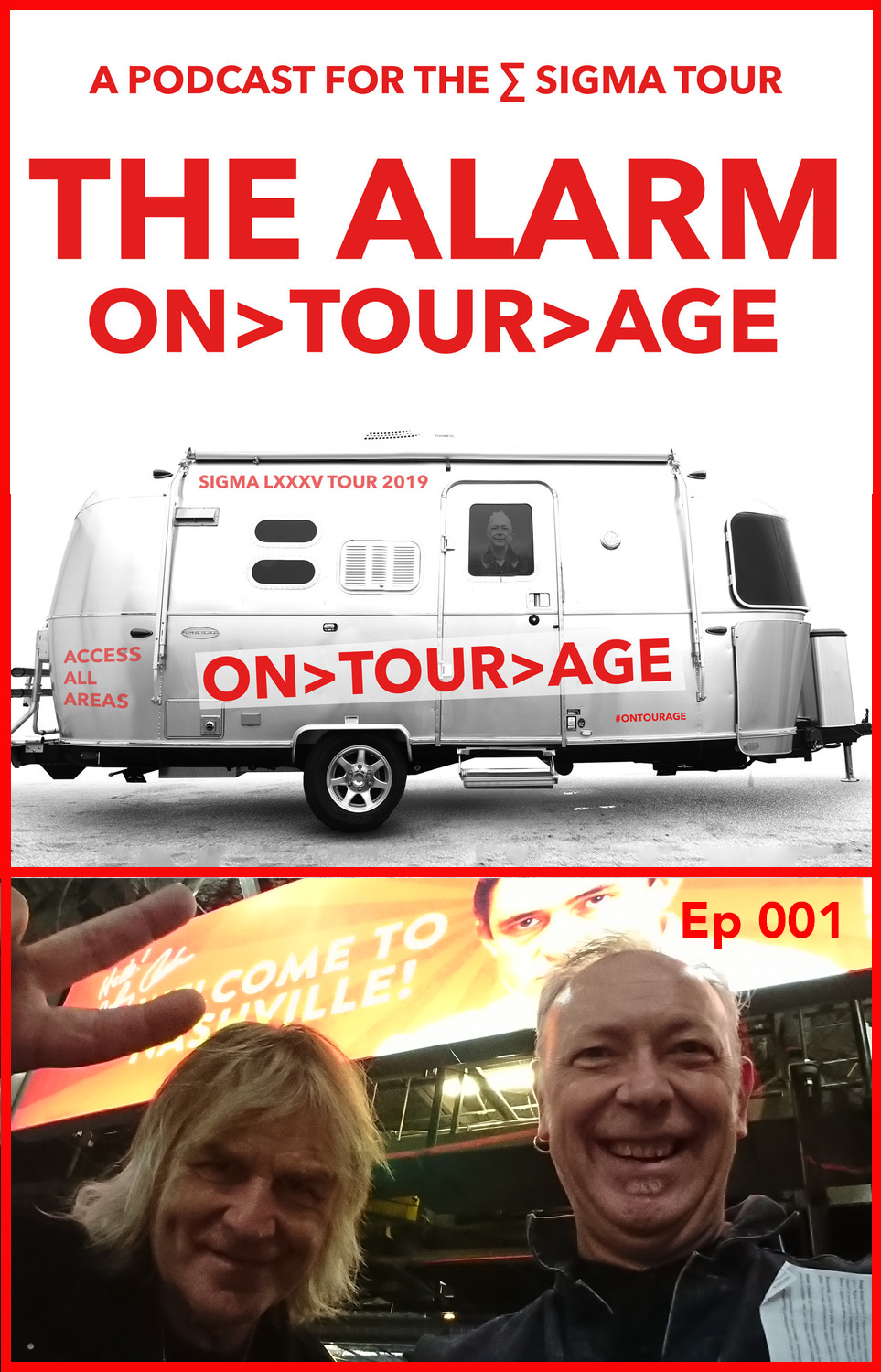 Subscribe to ON>TOUR>AGE from wherever you get your podcasts from.

‘This Is War (acoustic)’ [3:50] (Mike Peters), Mike PetersLead Vocals:Mike PetersLyrics: You say you need me like you need hypertension If I fell to sleep right now I know you’d put me right out of action To say we’ve lost control would be an understatement This thing that we’re undertaking… this ain’t love this is war Whatever I say to you whatever I try to do I can’t do the [read more]