The year of the Red Poppy is upon us.

The Alarm 40th Anniversary Concert at St. David’s Hall, Cardiff will now take place on Saturday April 15th 2023 and will mark the culmination of a year of Alarm anniversary celebrations that will begin in Rhyl North Wales (the birthplace of The Alarm), on March 11-12th 2022 with two very special Mike Peters’ acoustic concerts at Rhyl Town Hall. (All original tickets and passes from June 5th 2021 remain valid for both concerts at Rhyl and Cardiff along with any additional special  events including photo sessions with Mike Peters,  soundcheck pre-show experiences and after-show party).

As this will be the second time that we have had to move these shows (due to restrictions in Wales placed upon us by the Welsh Government), Mike Peters and all of us here at www.thealarm.com fully appreciate the patience and understanding of all original ticket and special event pass holders.

“We have worked closely with all the venues, promoters and event teams concerned, to come up with a new scenario that will enable these shows to be even more special than before.” states Mike Peters. “Myself and the team have put everything we have into making these brand new event dates work for everyone, and with every intention to make the concerts even more spectacular and emotional than we ever could have thought possible, when we set up the original dates for June 2021. Now in 2022/23 we have even more to celebrate than just our anniversary year; we also have the very fact that those of us who remain standing, are still very much alive and thankful for all the love, hope and strength we have both to give and to receive. I’m so looking forward to celebrating our unique history at these very special venues and creating some everlasting memories with you in both 2022 and 2023.”

Mike Peters and The Alarm’s full electric appearance at the St. David’s Hall concert will also feature a very special guest appearance from Alarm co-founding member Dave Sharp, and will now become the grand finale to a calendar year of touring activity around the world that will be honoured through the commissioning of a Red Poppy Flag that will be paraded at each event in 2022/23 until it’s final appearance in Cardiff, St. David’s Hall on Saturday Aril 15th before being laid to rest forever in the Alarm Sanctuary opposite Dyserth Waterfalls.

“By choosing a new Saturday night date for April 15th 2023, it allows us to also put together an event for the Friday evening April 14th 2023 and myself and the organising team hope to be able to announce details of this additional concert event very soon.” says Mike Peters. ” To host a grand finale Gathering-style concert as the culmination of a year long Alarm tour of anniversary celebrations at St. David’s Hall in Cardiff, Wales has the potential to become the kind of homecoming concert I have always dreamed of playing. I will be giving my all at this new date and taking to the stage as if it will be the last concert I ever play.” 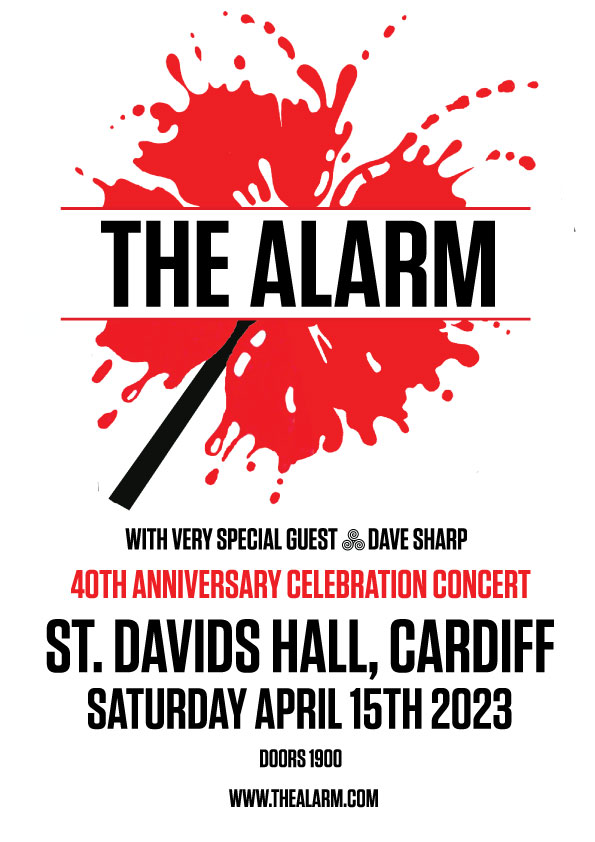 The acoustic celebration concert at Rhyl Town Hall on Friday March 11th and Saturday March 12th 2022 will feature two very special Mike Peters concerts celebrating music from all eras of The Alarm’s vast songbook. The event will also ensure that everyone attending has the opportunity to be photographed with Mike Peters during the Saturday Afternoon convention, and also to attend a special ceremony to celebrate the birth place of The Alarm on Sunday March 13th (venue and times to be announced during the Rhyl event itself). 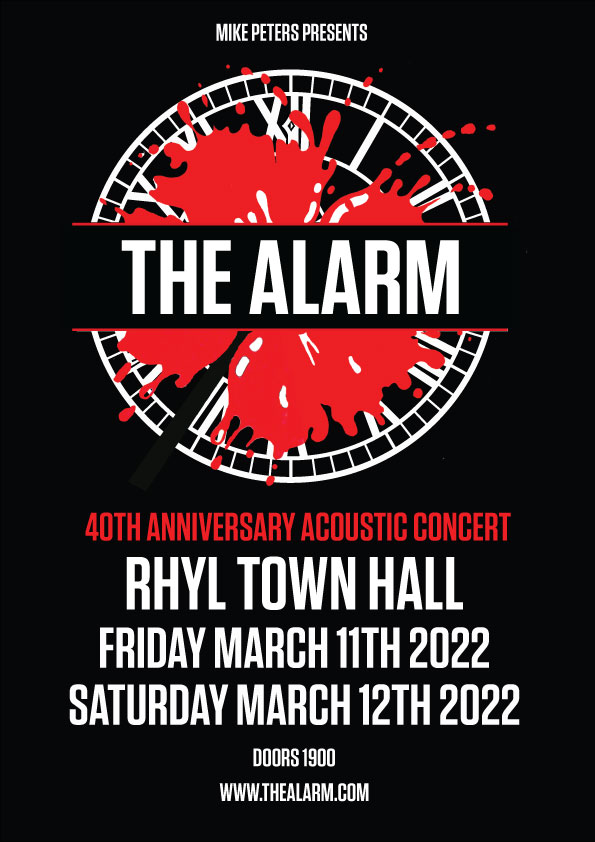 “The Alarm Red Poppy will be the symbol that will once again unite us in 2022/23, especially as we get back out into the world ready to share and rejoice in the music that has been the lifeblood of our relationship, the moments when we take these songs of freedom and once again hold our hands up high.” says Mike Peters. “I will be taking a specially commissioned Red Poppy flag to all the various venues and events where The Alarm’s music will be played in 2022 / 23, and  everyone will be invited to sign it; beginning with the first date of the Red Poppy calendar year at Rhyl Town Hall on March 11th and 12th 2022. The flag will fly everywhere thereafter, until it reaches its finale destination at St. David’s Hall in Cardiff on Saturday April 15th 2023.

Mike Peters has often created paint spray depictions of The Alarm’s Red Poppy. The poppy-spraying first began in the earliest days of The Alarm’s career when they could be found playing at long-gone music venues such as the Clarendon, Klub Foot and the Zig Zag. Mike Peters most famously paint-sprayed a Red Poppy onto the canvas backdrops of The Alarm’s The Stand video, which helped forge an indelible connection with early Alarm adopters (back when MTV was the force that helped define the 1980’s music generation). To further honour the 40 years since The Alarm’s iconic Red Poppy first appeared on the cover of the Marching On single, Mike Peters will be also creating a limited edition run of Red Poppy Canvas paintings to be displayed at various Alarm events throughout the Red Poppy calendar year. 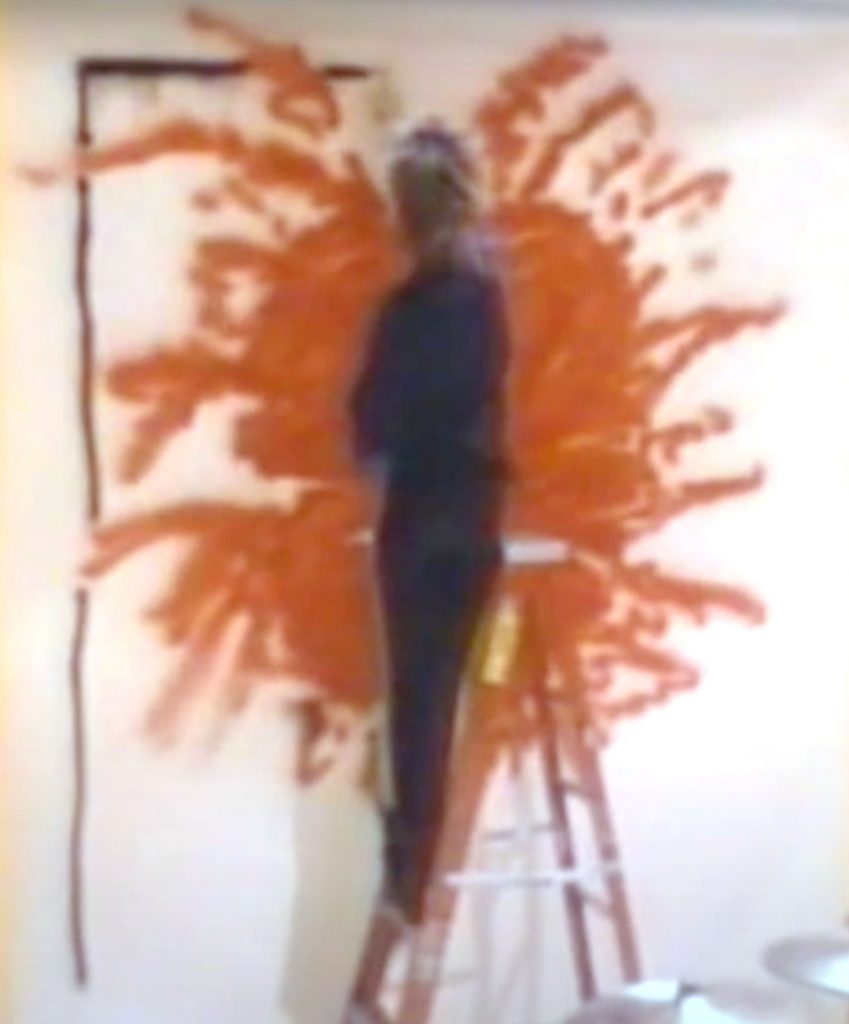 “The Red Poppy Flag will come to represent a time capsule of our time on earth,” continues Mike Peters, “with the names of all the people who helped to build this incredible Alarm community recorded into the raw material. Once its journey around the globe has been completed, it will then be lowered into the ground at The Alarm Sanctuary opposite Dyserth Waterfalls where it will remain for all time.” 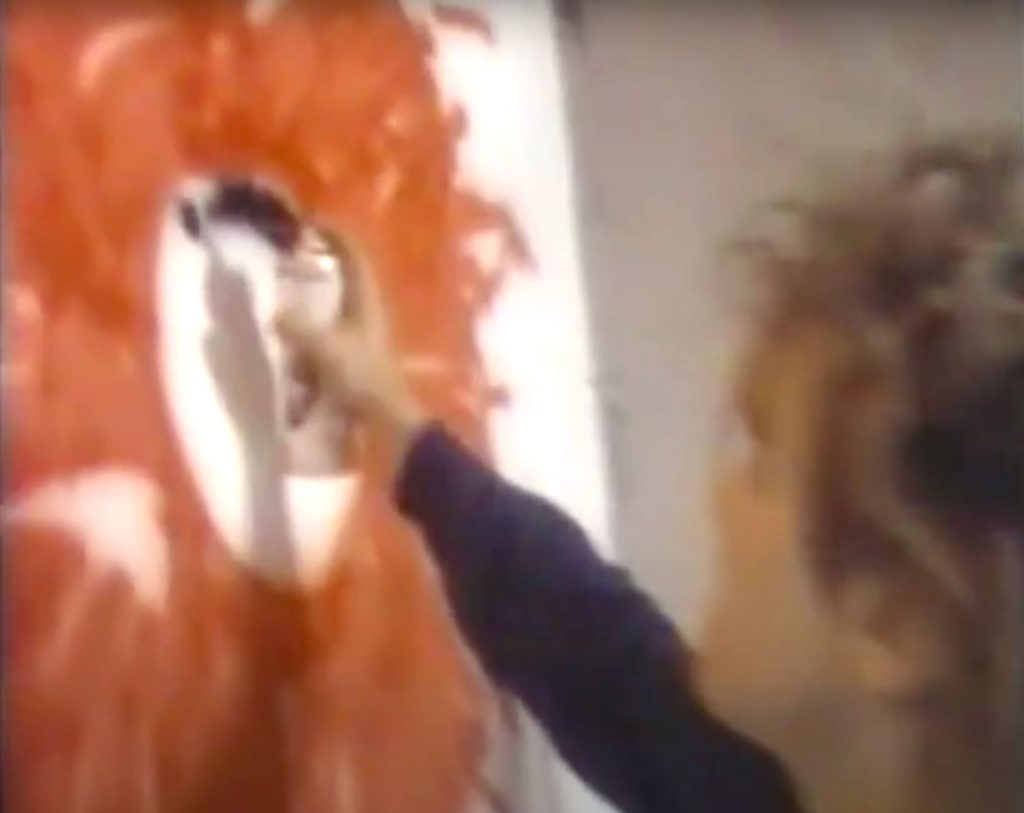