On 28th June, The Alarm will release a new album ∑ Sigma, exactly one year and one day after the release of its prequel = Equals.

To coincide with the launch of ∑ Sigma, The Alarm will celebrate with a very special UK event on Saturday June 29th at the Midsummer Gathering in the Great Hall at Cardiff University. Tickets are available here.

“The Sigma UK tour will see The Alarm return to Britain after over 150 shows played in the USA and around the world” states Mike Peters. “Alarm fans can expect to see the band at its absolute best. The new music we have created through Equals and Sigma has added to the legacy and ignited a new flame in songs The Alarm is known for. All that we have endured in recent years, ensures that every time we hit the stage is like our last night on earth. Bring it on.” 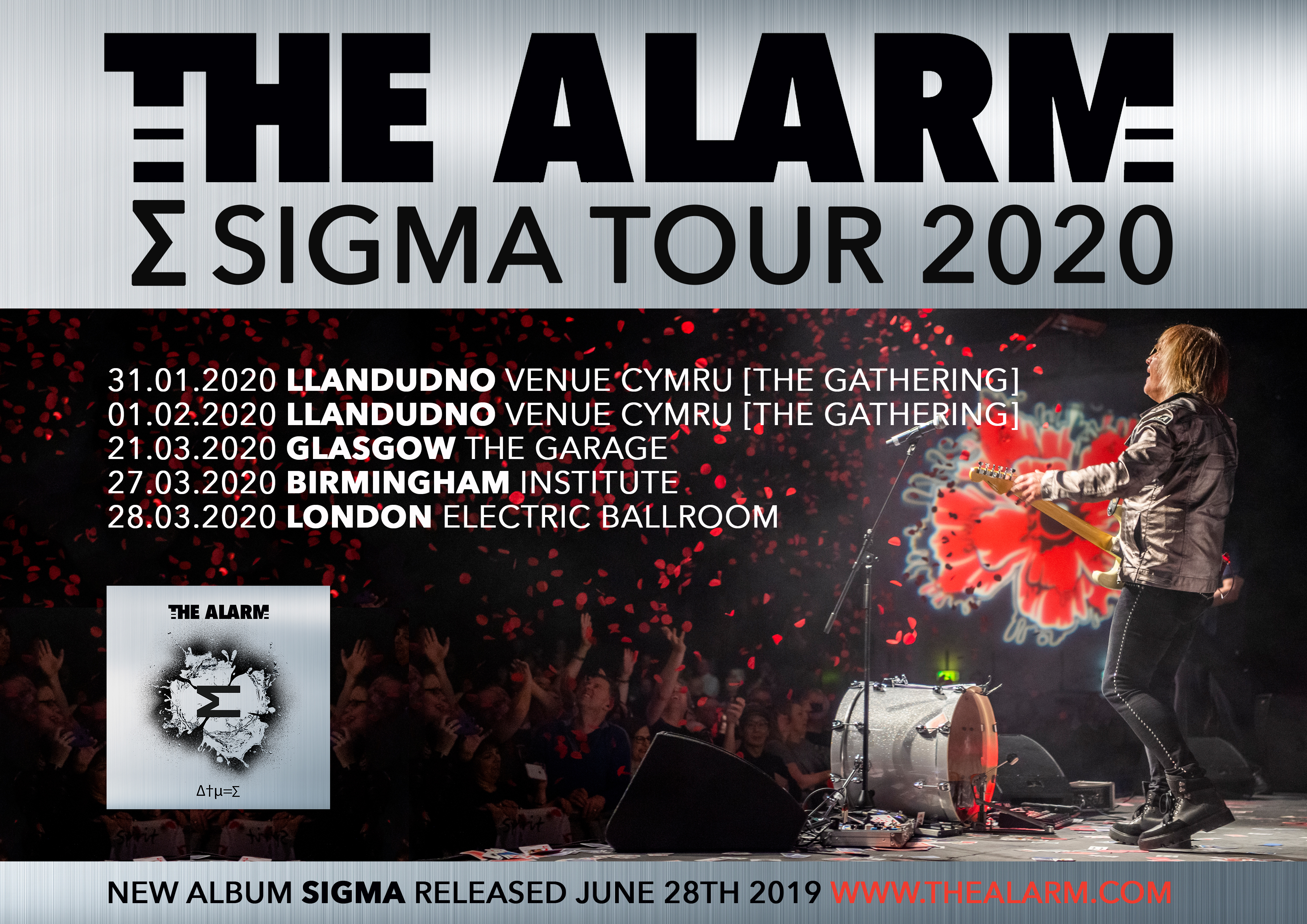 ∑ SIGMA (released by The Twenty First Century Recording Company and distributed by InGrooves) takes up and carries forward themes that were first expressed through = Equals, a collection of songs that acted as a retrenchment of original values and a poignant reflection of the tough times the band and its fans have had to contend with in recent years. With The Alarm firing on all cylinders again, the band released = Equals on June 28th 2018 and received some of the best reviews the group has ever had, and charted on both sides of the atlantic. Whilst committing to a vast amount of live concerts in support of the new music they had created, and with over 100 shows played, the emotional repercussions became clear for all to see, through the spirit of life-affirming optimism that fuelled every single show.

With so much material – almost 30 finished songs in all – The Alarm initially envisaged a double album (which started out under the all-embracing handle of Sigma’s opening cut Blood Red Viral Black). “All the songs had a similar emotional core although there are also fundamental differences,” explains Mike. “So I divided the songs into categories – inwards / red / blood / outwards / black / viral. Road-testing the new songs live, helped us decide to release the music in two stages. First as Equals / = with the knowledge that a sequel would come in the form of Sigma / ∑, a year later.”

∑ Sigma has once again been produced by George Williams (who has worked with The Alarm throughout this entire period), and acts as a sequel for 2018’s critically acclaimed EQUALS release and features musical contributions from original Alarm guitarist Dave Sharp and Billy Duffy from The Cult. “It’s an honour to have Dave Sharp performing on Sigma“, said singer Mike Peters. “Dave was and always will be, part of The Alarm family, and to have him feature on this record is a thrill for all of us and I’m sure, for all the fans too. Having Billy Duffy play guitar with The Alarm has become part of our DNA,“ continues Mike. “It’s a relationship that goes back to the start of this new century, when the beginnings of new era’s for both The Alarm and The Cult were being formed. ∑ Sigma defines our relationship as friends and opposites, human beings united through the colour of sound.”

Can You Feel Me shows just how deep emotions must have run in the Peters’ household with a lyric fraught by tension and release, while the psychedelic explosion – Brighter Than The Sun, trips a wire of white heat rock music. Time with its eternal musical countdown, echoes the fragility and resolve of the human condition as ∑ Sigma comes to an apocalyptic ending with Armageddon In The Morning, and a solitary piano / vocal reprise of Two Rivers (a song that spans and connects both albums), only this time, with a completely different lyric and musical focus, bringing unity and closure to all of the themes and explorations.

∑ Sigma utilises the vast array of instrumentation that The Alarm currently has at its disposal, with guitarist James Stevenson (who has also performed guitar duties for Jay Aston’s Gene Loves Jezebel, The Cult, Scott Walker and Tony Visconti’s Holy Holy), playing both guitar and bass through a unique combination of pedals, double neck, six and four string instrumentation. Charismatic drummer Smiley drives the rhythm unit with a traditional acoustic drum kit augmented by electric percussion and diverse tribal beats. Pianist Jules Peters deploys a wide-ranging palette of orchestral string and synthesised tones, along with pure pianoforte for some of the stripped down sections the songs demand. Throughout, Mike Peters is at the forefront with his impassioned vocal delivery and ever changing use of electro-acoustic instrumentation, custom developed by British luthiers Auden Guitars, to represent the beating heart of the group’s signature sound.

∑ SIGMA is the latest chapter in an inspirational story that has seen The Alarm sell more than six million albums world wide while clocking up 17 Top Fifty singles in the UK. Formed in 1981 in the Welsh seaside resort of Rhyl, The Alarm broke through on the back of the singles Sixty Eight Guns, Rain In the Summertime and ‘Spirit Of ‘76, their music a passionate blend of amped-up acoustic guitars, harmonica and Mike’s stirring voice. A string of successful albums saw them bracketed alongside U2, The Waterboys, Simple Minds and Big Country as part of Eighties rock’s distinctive Celtic fringe. After an emotional swansong at Brixton Academy in 1991, the original line-up splintered, with Mike going it alone and joining forces with Billy Duffy of the Cult in a short-lived band called Coloursøund. The lingering allure of his old group proved hard to resist, however, and Peters entered a new millennium back at the helm of The Alarm. The group’s activities since that 1999 re-launch have included an ambitious album project, the Poppy Fields Bond, that saw them release five studio albums of original material in the first five months of 2003 and a ‘fake band’ escapade the following year in which they concealed their true identity by releasing a single, 45 RPM, as The Poppy Fields. They created a global news story when the song unexpectedly hit the UK charts. Mike Peters was diagnosed with Chronic Leukaemia in 2005 and although disabled from touring still managed to continue making new music through the albums Guerilla Tactics and Direct Action, which was followed in 2018 with the release of ‘Equals’ which charted on both sides of the Atlantic.

Mike Peters is also co-founder of the Love Hope Strength Cancer Foundation and after taking musicians to many of the world’s most iconic mountain locations to perform fund raising concerts (Everest, Kilimanjaro, Snowdon and later this year to Iceland), signing up over 200,000 people to the stem cell donor registry that has resulted in over 4,500 potentially lifesaving matches for blood cancer patients who need a second chance of life, Mike Peters was recently awarded the MBE (Most Honourable Member of the British Empire), by HRH Prince Charles at Buckingham Palace.

Mike Peters is a man who refuses to be beaten and his drive in the face of adversity is inspiring to many.

“All I have ever tried to do in my life as a musician and songwriter’, says Mike. “Is to write honestly and openly. I never thought my personal life would become so wrapped up with the lifeblood of The Alarm and the charity Love Hope Strength. ‘Sigma’ exists for that reason, it’s about the will to stay alive, the summation of all that I have aspired to, and all that I have to give’.

This summer, the band fly straight the the US to undertake an extensive 40 date American tour. The Sigma LXXXV Tour #sigmatour2019 which will showcase a fraternity of alternative British rock bands led by The Alarm, post punk auteurs Modern English, and the charismatic Jay Aston’s Gene Loves Jezebel, presenting the very best music and ideas from a generation of enduring artists, brought together through a legacy of timeless sound and song. Tickets and information is available at:  www.thealarm.com

Throughout the Sigma Tour, Love Hope Strength (co-founded by Mike and Jules Peters), will be hosting bone marrow drives at each concert aimed at finding donors for people suffering from Blood Cancer who need a transplant for a second chance at life! The charity has already registered over 200,000 individuals and located some 4,000 plus potentially lifesaving matches. Visit www.lovehopestrength.co.uk for more information.