Surrender. I heard Bono talking about this very subject last night in the Apollo Theatre, Manchester and saying how he is still struggling to come to terms with the meaning of the act himself, and how the idea of surrender has affected his whole life both personally and professionally.

I first witnessed Bono making the symbol of surrender on stage back in 1982 when The Alarm were opening for U2 prior to the ‘WAR’ album being released. It was remarkably powerful, especially as I don’t think any musician had used the symbol (of the arms raised aloft in the universally recognised way), in a music setting before. We had the peace sign (John Lennon), and the V sign (Johnny Rotten), but the surrender act belonged to Bono, especially with the message and power of the music U2 were making in 1982 and would release to the world via their third album ‘WAR’ in 1983.

It was a time when UK music journalism could make or break careers, and if they couldn’t break a career then, they would at least try and destroy it. This is what I witnessed happening to U2 and especially Bono in 1982/83. Critics questioning the symbol of the War album’ theme of surrender, and the integrity of Bono in cutting reviews and negative articles that only made the bond between U2 and their fans ever stronger. I wrote the lyrics to The Alarm’s Blaze of Glory as a response “It’s funny how they shoot you down when your hands are held up high”.

Here in 2022, at the Apollo Theatre in Manchester, I can see that Bono has never given up on his early dreams and visions and through the many constructs of his Songs and Stories of Surrender stage show, you can see how he is still evolving as a person, still moving forwards and facing the challenges of today, yesterday and tomorrow. Throughout the show Bono is telling us (in his own way), that he is always prepared to surrender not just to  himself, but to others, to his family, his band mates, to new ideas, to music, to power and poverty and to life and death. It was a brilliant show, moving, illuminating and a showcase to the many facets of Bono’s imagination, musicianship, creativity and personality.

As I walked up to the venue, I was stopped by someone from South Wales, who recognised Jules and I and wanted to ask about my health and Jules’ adventures in the Sahara. We posed for a picture and he was so excited about seeing us in person, that he vowed to buy his Gathering tickets especially now he had seen me in the flesh and looking so well (his words). The thing is I do feel well. I feel like I’m ready to get back to what I do best and hit the stage with my voice and guitar like I have always done. I know I can make it all the way to The Gathering now,

While Jules was away in the Sahara helping to raise over £100,000, in Love Hope Strength funding, I went into the studio and literally found my voice again. I made it through a week of intense singing, delivering the vocals on 12 brand new songs that when put together, will form a brand new Alarm album for 2023. I can’t wait to share this new music with you all as soon as it has been finished completely.

Inside the venue, I met. other Alarm / U2 fans and I was overwhelmed by the well wishes and goodwill shown towards me. Being back at a concert was intoxicating and I even allowed myself the luxury of a first – post relapse -pint!! I escaped to my seat, and just before the house lights went down, Jules and I were visited by Bono’s wife Ali. It was so wonderful to see her and after a brief catch up, Ali handed me an envelope from Bono. I was so touched to receive a message from the man himself who in his note, reminded me that The Alarm and U2 and had shared the stage at the Apollo, ‘Mad’chester (as he put it), almost forty years ago to the day. I was moved even more profoundly when during the show, he mentioned that I was in attendance and told the audience about the day we played on “this very stage”, back in 1982. The cheer that went up made me want to cry and I was literally shaken by the thought of how much we have both been through in the forty years since we first started dreaming together.

We are grateful to have lived in our times, times that have given us people like Bono, like U2 and to have their music as a soundtrack. We are lucky to have lived in a time of musicians with massive ideas, people who like Bono have tried to change the world and have fun at the same time. I’m so glad I was in Manchester to experience the life force emanating from a human being I have known since 1981 and who wrote the words to U2’s song Surrender that I first heard in this venue back 1982 –

“The city’s afire. A passionate flame. It knows me by name”.

In his note to me Bono wrote, “knowing you are here will make me be better again”, seeing Bono last night has made me feel better, it made me feel alive again, made me realise I AM ALIVE AGAIN. 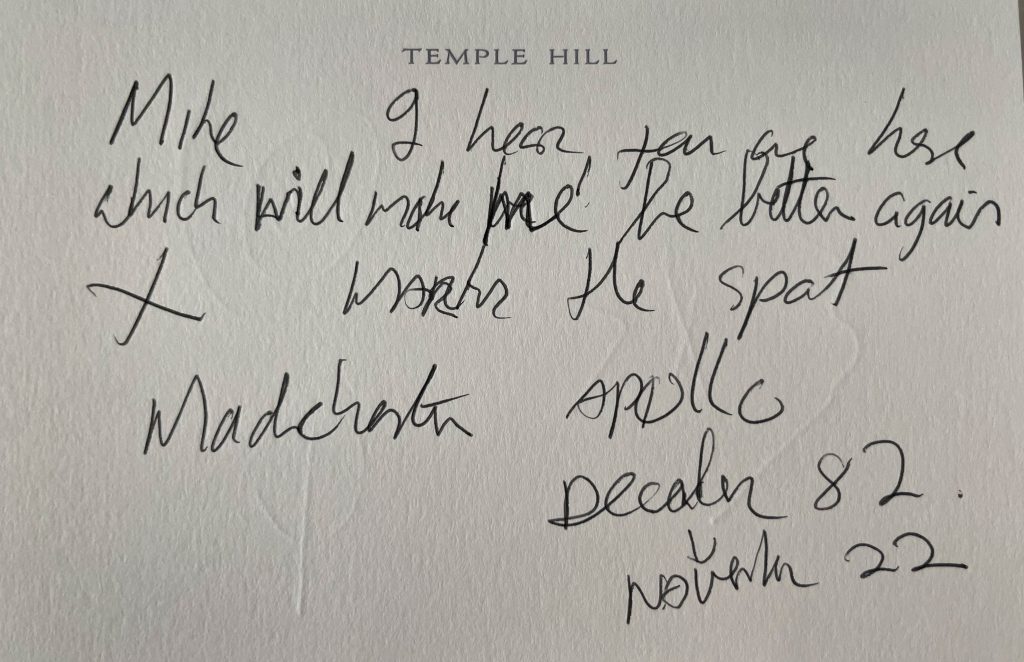