On May 23rd the day after The Alarm closed the Absolute Tour at Guildford Civic, they found themselves in London (and on the south coast of England), with respected Manchester based photographer Kevin Cummins for a photo session that would yield the shots used for the reverse and inside cover of the as yet untitled second Alarm album. Kevin Cummins would also accompany the band on their tour bus to Germany to shoot their festival appearances at ‘Rock Am Ring’ at the world famous Nurburgring Race Track and in the Neckarstadion Stuttgart both of which were to be broadcast in part, by the powerful German TV show ‘Rockpalast’.

Visit the alarm.com Flickr Photo Gallery to view an exclusive slideshow of these photo sessions which include all the shots used for the album and subsequent tour programmes plus many previously unseen images. 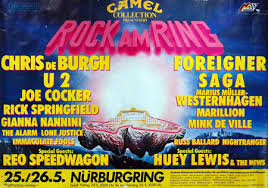 May 26th 1985 The Alarm Neckarstadion, Stuttgart

“I remember this show at the St. Jakob Stadium in Basel, Switzerland really well. We had driven through the night on the tour bus and as we were due on stage at 11.00 in the morning, I had instructed the crew to wake me up at 9,00 so I could prepare for the show and warm up my voice etc. At 10.55 I was shaken awake by the tour manager who had forgotten all about waking me up at the appointed time! I had to throw my clothes on and run as fast as I could to get on the stage. I don’t think I woke up properly until we got to Howling Wind which was the second song in the set…. Trying to sing that after you’ve only just got out of bed was a challenge I can tell you.” – Mike Peters 2015

The following day, the travelled back to London to begin pre-production sessions with Mike Howlett which were again held at Ezee Hire studios near Kings Cross, London.

‘Mike Howlett was very easy-going as a producer, gently encouraging us to take our music further. He was great during the rehearsals of “Spirit Of 76” – a brand new song developed by myself and Eddie Macdonald over a period of time before and after the tour, which had a very complex arrangement. He was able to grasp the songs concept and help us to drive it to a conclusion. Mike suggested the main 4/4 snare rhythm to the song, which proved so effective when we went back out on tour following the release of the album. His other main contribution was during the “Mersey lights” section. Mike came up with an echo trap which held a few brief notes of sound, he then looped them to create the atmospheric section running through that part of the song.’ – Mike Peters

By now the album also had a working title – ‘Strength’.

Come back tomorrow as the story of Strength – An Oral History continues…… Read all about The Alarm in the recording studio cutting ‘Strength’ during the summer of 1985, when some world famous guests drop by along with Mike Peters second and third visits to Wembley Stadium (during this Strength saga), and the Live Aid concert of 1985.

Strength 1985 – 1986 is released on Friday March 15th 2019 and is available in CD / LP and Download versions with a host of previously unreleased exclusive tracks across all formats.