“The Alarm asked their fans to choose their next single, and overwhelmingly so, they chose “Spirit Of ’76,” a song written by Mike Peters about his teenage friends. The 7 minute song was the obvious standout on the Strength album. It’s quiet beginning, punctuated with harmonica, exploded with full- force electric guitars like The Alarm had never produced before. The song was a hit with Alarm fans, but became the bane of music critics. Missing the true meaning of the song, they called The Alarm naive for writing a song “glorifying punk.” “Spirit Of ’76” may have been set against a punk background, but it’s main themes were friendship, and teenage dreams, both lost and found. Loved by their fans, the song became The Alarm’s most popular of all-time. The “Spirit Of ’76” single was released in January of 1986. The UK 7″ included an inferior 4 minute edited version of the song, and a live version of “Deeside.” The USA 7″ include the edited version of “Spirit Of ’76” and the b-side “Reason 36.” In theUK, two 12″ singles were released. The first included the album version of “Spirit Of ’76,” as well as live versions of “Deeside” and “Where Were You Hiding When The Storm Broke” The other 12″, a limited edition double-pack, included the same 12″ single from the standard version, plus a second 12″ with live versions of “Sixty Eight Guns” and “Knocking On Heaven’s Door.” All the live songs on the “Spirit Of ’76” singles were recorded Nov. 5th in Boston, MA. Only a 12″ promotional single was distributed in the USA, including the album version of the song, and a special A.O.R. edit. “Spirit Of 76” reached #22 on the UK singles charts, and grazed the top 60 in the USA.  –Steve Fulton, Goldmine 1995

“I remember the incident of Dave Sharp falling into the crowd really well. We had just come on stage and launched into ‘Marching On’. Dave was trying to make a big impression obviously, and came running from the back of the stage to the front, tripped over the monitors and headlong into the crowd. At first, he tried to play on but soon ended up going down like a sinking ship into the ocean of fans! It took quite a while to rescue him and get his guitar and amps sorted out. The fans were extremely bemused and weren’t sure if this was supposed to be a part of the show or not. We should of gone off and started again as we had a hard time getting the gig back on track after that. It would have made a killer ‘youtube’ moment if it had happened today.” – Mike Peters 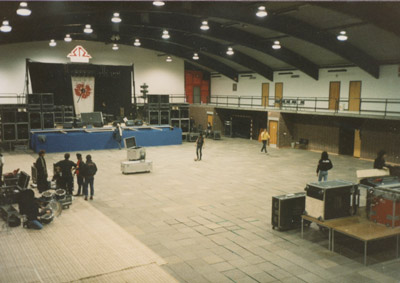 “I never understood the edited version of ‘Spirit Of ’76’ released as single.  I think I heard it on the radio once on KLOS in Los Angeles. I distinctly recall the DJ wondering why they tried to edit it and being baffled by it.   Afterwards they played the original version a few times, but I think the ‘edit” confused matters.  It kind of ruined a great song.   Likewise, The local “alternative” station, KROQ never really got into the song at all.  This was the first in a long string of bizarre record company decisions that I believe really hampered The Alarm’s efforts on the Strength album” –Steve Fulton, Alarm Fan 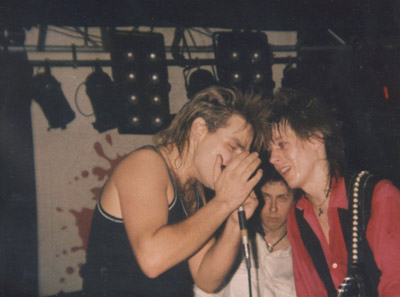 Photo – On stage at the Markthalle, Hamburg same night after flying back following the taping of the show at BBC studios in Wood Lane, Shepherds Bush.