Due to overwhelming demand, pre-orders for the Strength 1985-1986 Remaster have had to be suspended until we can restock. All copies of the signed replica backstage pass edition have also completely SOLD OUT too.

Strength 1985 -1986 – An Oral History Updated begins serialisation from this Monday alongside the current re-telling of Alarm history through The Alarm Tele-Visual History project, which will tonight present, the widescreen premiere of Strength – The Official Video, complete with remastered audio sound.

The video was shot at Jacob Street Studios (a former dog biscuit factory in the East End of London), during the month of September 1985.

Directed by Nick Morris and produced by Fiona O’Mahoney, the video perfectly reflects the lyrical content in that it’s predominantly dark theme is interspersed with bursts of hopeful colour.

“The Strength video marked the first time that we worked with a stylist”, says Mike Peters. “Nick Morris the director wanted us to dress in a way that would fit with the monochromatic film look he was after, and so wanted us all to adopt a certain dress code. Working with the stylist (that he brought in), wasn’t something we were particularly comfortable with, but the girl in charge soon put us at our ease, and found some great pieces to add to the black and white high contrast look Nick wanted to achieve. I absolutely loved the jacket she found, which was loaned from a high end bespoke clothing designer in the fashion district behind Oxford Circus. I’d been allowed to keep it for the live television appearance on Saturday Superstore on the weekend after the video shoot and desperately wanted to keep it for the tour, but the designer wouldn’t sell as they wanted it for their fashion show in Paris. Dave is wearing a shirt from Johnsons, a then super hip rock and roll clothing store at the World’s End area of the Kings Road in Chelsea. His ubiquitous leather jeans which he wore all through the Strength tour and beyond, were from the (I kid you not), hard to find London Leatherman underground fetish clothing store on Queenstown Road, Battersea. Nigel is wearing a pretty dandy high collared shirt and cravat which made him look very distinguished and Eddie is sporting a black satin jacket that he had worn on his wedding day a few weeks earlier”. 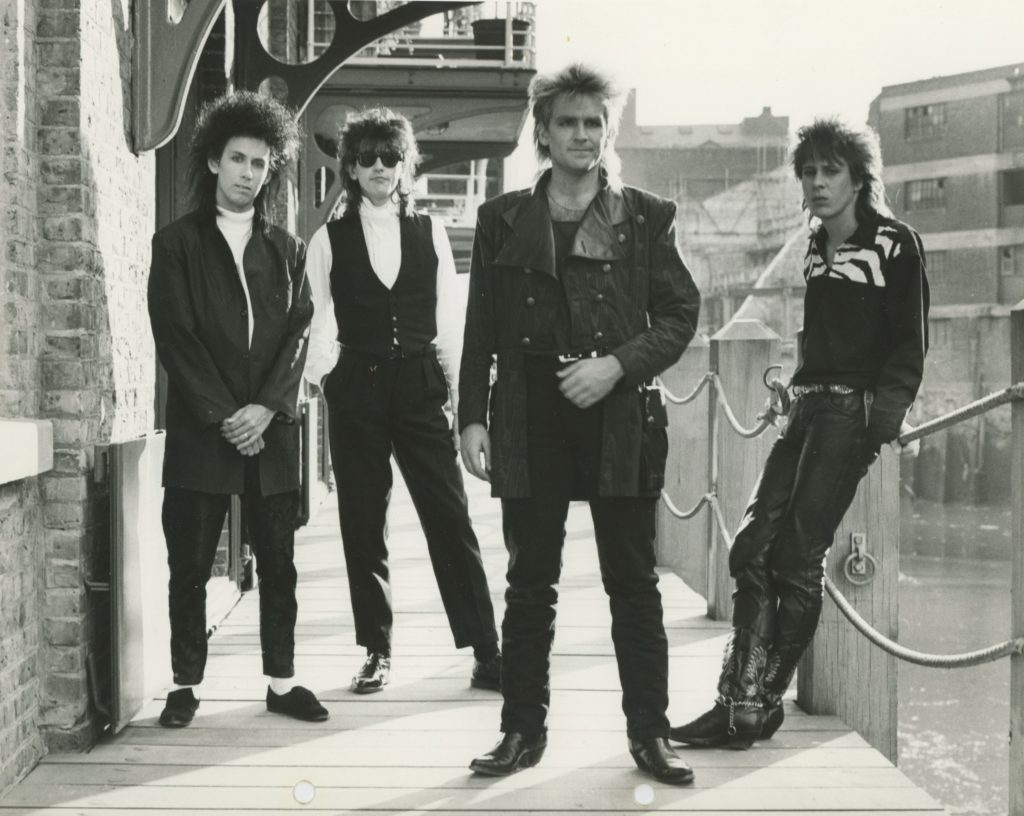 Photo from outside the video shoot location at Jacob Street Studios, London by Kevin Cummins.

The video also features falling poppies – a feature most recently reproduced at the annual Gathering in February. “This was one of my ideas to add to the shoot” continues Mike. “The backlit swirling poppy was achieved through rear projection and looked really effective and I suggested the falling poppies for the finale sequence. We cut up loads of red papier mache paper and  had someone above the sound stage throwing the pieces down from a bucket. It looks great on film, but trying to sing / mime with the red paper dropping into your mouth and eyes was comical at times, especially when a second take was called for and the crew had to sweep all the pieces up and place them back in the bucket for take two.”

The video was converted to the widescreen format by Gary Overington and the audio has been painstakingly remastered by Pete Maher, and brings additional clarity, definition and impact to this seminal track.

The ‘Love, Hope, Strength’ lyric that first appears on Strength has become synonymous with The Alarm and a rallying cry for many – not least through the subsequent establishing of the leading rock ‘n roll cancer charity that bears the same name.

Strength was released as a single on 9th September 1985 and showcased a growing maturity in the band’s songwriting process in advance of the Strength album which was ‘unleashed’ on October 1st 1985.

It also signaled a departure from the sole use of electro-acoustics that underpinned the first album sound of ‘Declaration’, in favour of a fuller, more electric sound that was driven by Dave Sharp’s use of an iconic 1962 white Fender Stratocaster (although in the video he used a white Vox Teardrop for effect).

Don’t forget to subscribe to The Alarm’s official YouTube channel to receive news of further releases in the continuing Televisual History series.

Strength 1985 -1986 – An Oral History Updated begins serialisation from this Monday.