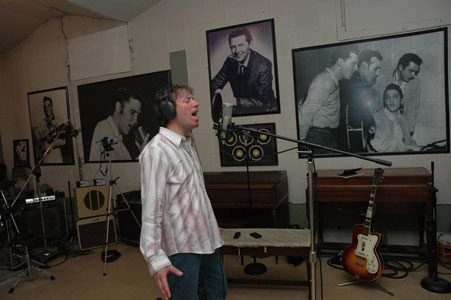 MPO is delighted to announce the Special Guest on Sat night, Alarm fan and USA SInger Songwriter, Joe Silva from The Threats.
Joe will perform a half hour acoustic set on Sat before the main headline, TMTCH and The Alarm!  Make sure you get into the Red Poppy Arena on time to catch all the musical action!
Joe Silva’s earliest memory is receiving a drum on his third Christmas and playing it that evening to the 45rpm records that his sisters had received. The true self-awareness of his life’s journey began at that point in time. Pencils & Lincoln Logs became drumsticks, while desk-tops and chairs became drums until real drums were acquired. He eventually traded his role as a drummer in the school band into the role of a rock-drummer, performing in nightclubs by the age of 14 with a band called ‘The Threats’ that he co-formed, and held the position as resident drummer, singer, and songwriter. By age 15, the band was receiving airplay in the United States, and Joe began a 24-year career performing on the East Coast
of the U.S., opening for dozens of international acts such as: Joan Jett, Missing Persons, The Hooters, Extreme, The Monkees, Robin Trower, Joe Satriani, Quiet Riot, Howard DeVotto (Buzzcocks), Concrete Blonde, David Johansen (New York Dolls), Leslie West (Mountain), ‘Til Tuesday, Sam Kinison…
Eventually, after being beaten-up by corrupt entertainment lawyers and song sharks on the East Coast, Joe was frustrated, hurt, and was listening to his favorite band – The Alarm. The song was ‘Unsafe Building’, about tearing down one’s old self and rebuilding that self into something new… something stronger. Joe decided to move to Los Angeles in pursuit of a major record deal. After several months of searching for work after potential jobs fell through, his money had run out, and Joe realized that he hadn’t been able to play at all because he couldn’t afford a studio. Eventually, a homeless man convinced Joe to go back to the East Coast and re-group before Joe became homeless himself. The lessons that Joe learned during that period did make him new… made him stronger. He reassembled The Threats, released a new CD, and continued to receive airplay and build an East Coast following.
Eventually, Joe and his band performed as the support act for the band & songwriter that Joe looked up to, as much as he admired John Lennon and The Beatles… it was Mike Peters and The Alarm. They soon became friends, and The Threats played on dates of three Alarm tours. Often times during Alarm concerts on those tours, Mike Peters would dedicate a song to Joe’s band. The song was always ‘Unsafe Building’, which always had significance to Joe.
Currently, Joe Silva is recording a new solo CD at Sun Studio in Memphis (where Elvis & Johnny Cash began their careers), and in New York City with producer Anton Fig (drummer for The Late Show w/David Letterman). Mike Peters sings on one of Joe’s songs, titled ‘Blue’, which will be released in late 2012 as the European version of the tune. The American version of ‘Blue’ can be found on iTunes now. Joe’s songs envelop heartbreak & hope, and he will trade his drums for a guitar to starkly deliver acoustic versions of his stories on Saturday night at The Gathering.
“Alarm fans will love Joe… He’s an engaging, melodic and thoughtful songwriter” – Mike Peters“Joe Silva
is one of the few shoot-from-the-hip songsmiths of our time!” – Will Lee (CBS Orchestra)
www.TheJoeSilvaWebsite.com