Rhyl Town Hall rocked as Mike Peters performed 115 songs to a sold out capacity crowd of fans at the official 29th Gathering on March 11th – 13th 2022. 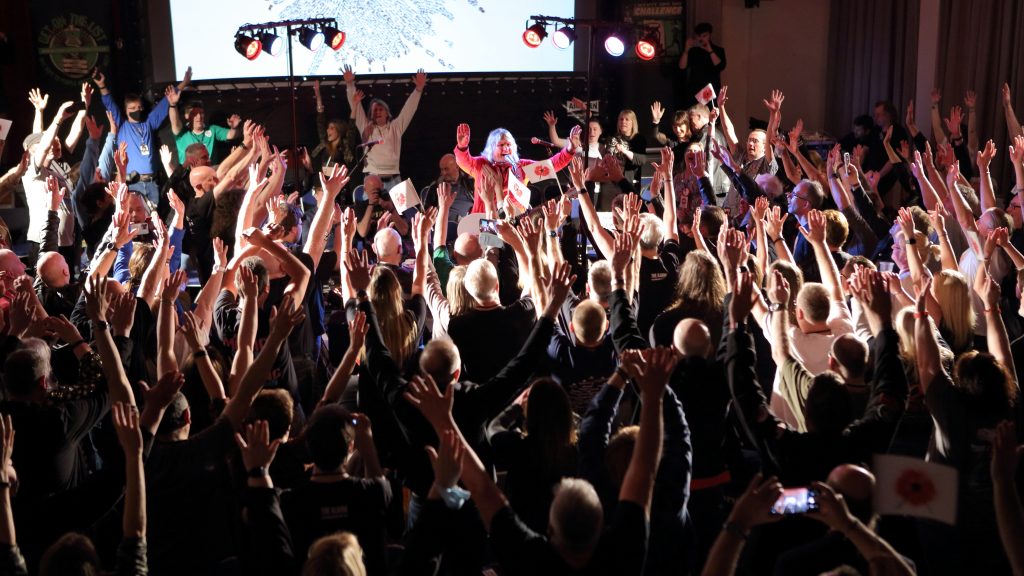 Upon the Friday evening arrival, fans were presented with specially commissioned 40th Anniversary Alarm Rosettes and a carnival atmosphere was in full flow by the time Mike Peters took to the stage promptly at 8pm.

The roar as Mike stepped into the spotlight was breathtaking as everyone rose as one to celebrate the return to the UK stage, of their hometown hero.

The first set ran for approximately 80 minutes with songs in reverse order from 2021 back to 2008. Mike was armed with a beautiful looking songbook that featured the recently designed song title red poppy logo and as he turned the pages, song after song from this most creative of Alarm eras was revealed and performed. 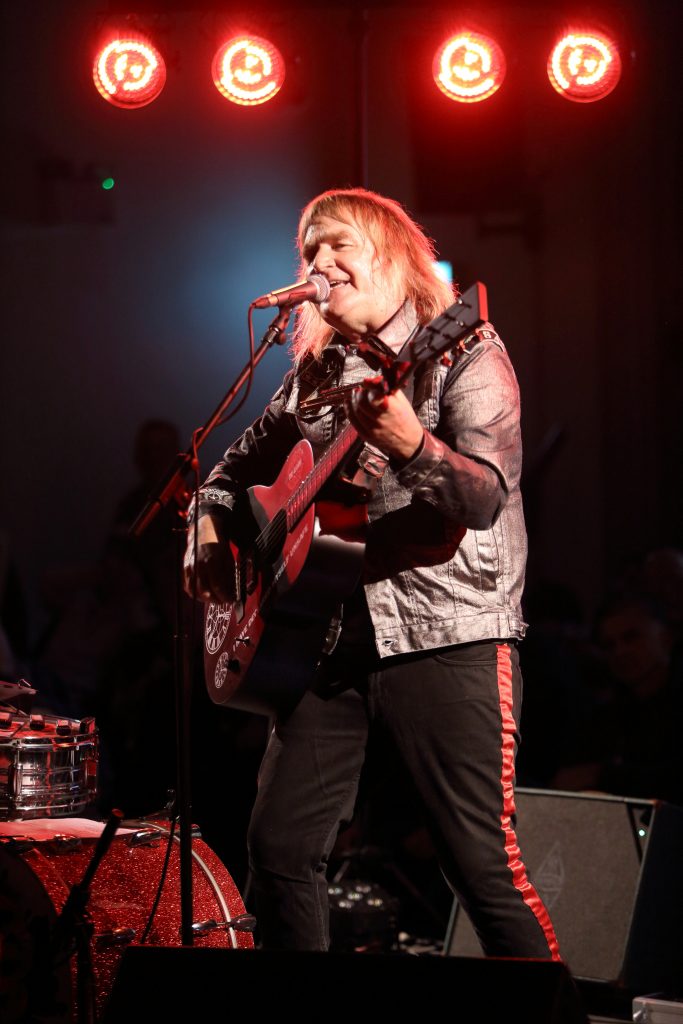 After a short interval Mike was back on the stage (which was situated in the centre of the venue), and surrounded by fans on all sides. Mike hardly spoke throughout the evening, preferring to let the music do the taking and in this second set, performing songs from 2006 – 2000 beginning with songs from the Under Attack album followed by selections from the 5 x album In The Poppy Fields Collection. A standing ovation from everyone present was made complete with  a rousing version of Close and a rocking 45 RPM. 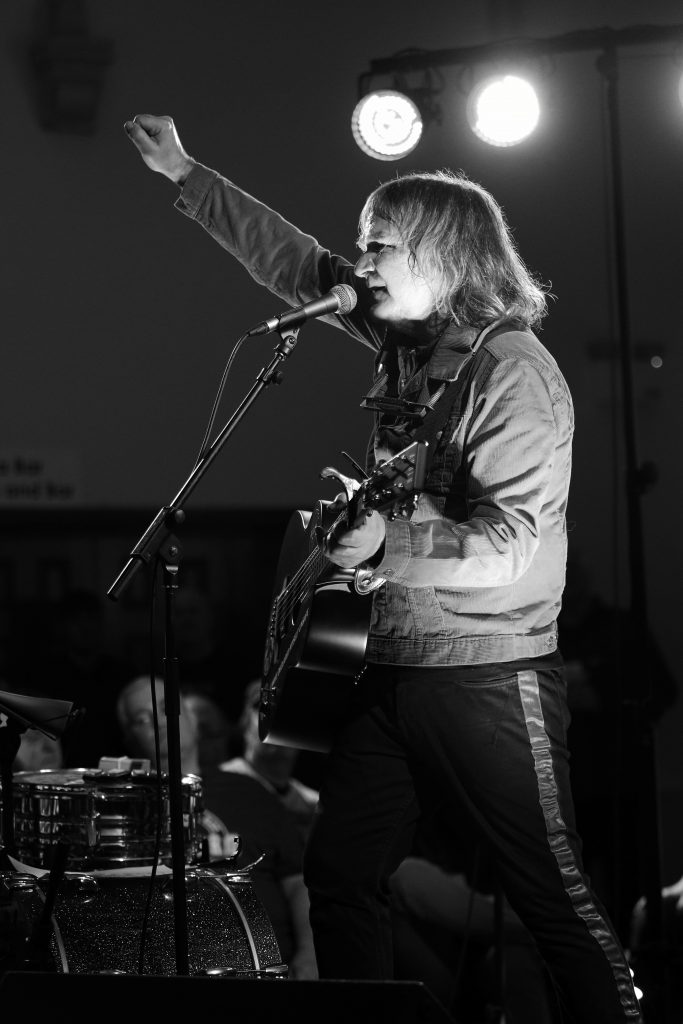 Day Two began with an afternoon convention and British Premiere of the new Alarm film – 50 Days In Lockdown. Mike Peters posed for official History Repeating photographs with all who attended and then introduced the film which was displayed on a huge 16 foot screen. An illuminating Mike Peters Q&A session followed with questions covering all manner of subjects. As the minutes ticked by, you could sense the anticipation for Saturday evening and the forthcoming tour growing with every passing moment of the event.

Saturday evening opened up at 1900 only this time, the audience members were presented with Red Poppy Hand Flags upon arrival and by the time Mike took to the stage at 8pm the excitement in the air was palpable. 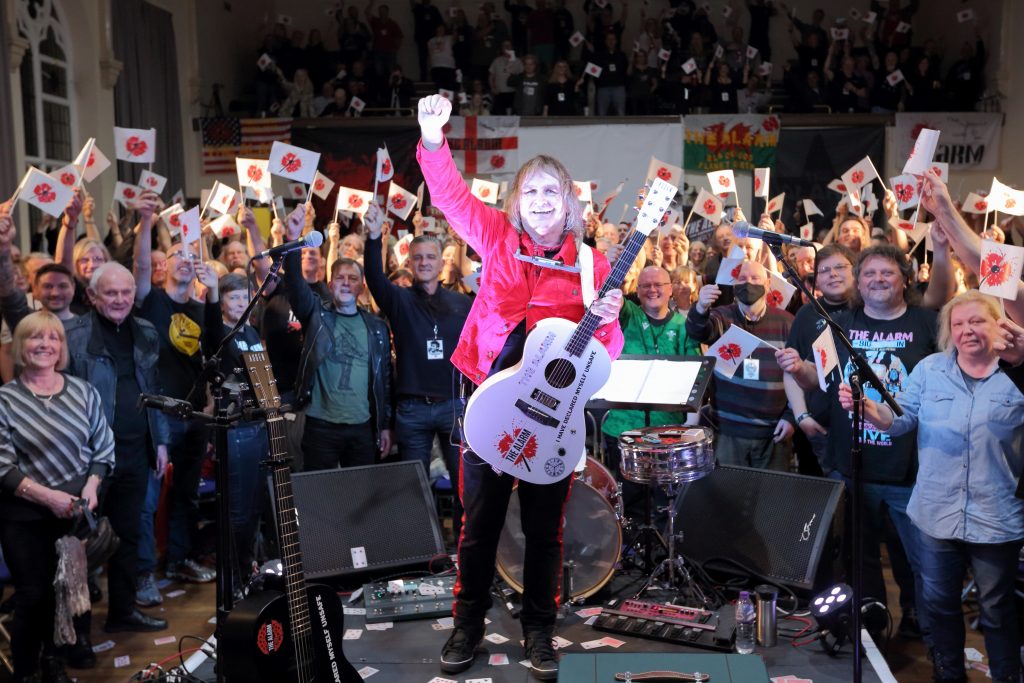 Taking everyone on a musical journey through songs from 1999 to 1992, Mike Peters and the audience were both in absolute top form. The lyrics filled the room and every song played evoked special memories for all in attendance. Some beautiful and unexpected performances brought many a tear to the eye and the sound of everyone singing Breathe in perfect unison was one of the many, many high points of the weekend.

The second of the Saturday night sets began with Moments In Time and we were transported back to the very origins of The Alarm’s music via songs from each and every Alarm album of the nineteen eighties. The encore was filled with songs from Declaration and as the midnight hour approached and with Mike having already been on stage for over 6 hours, we arrived at the beginning as each and every person in attendance declared themselves UNSAFE.

It was once in a lifetime concert and never ever to be forgotten. 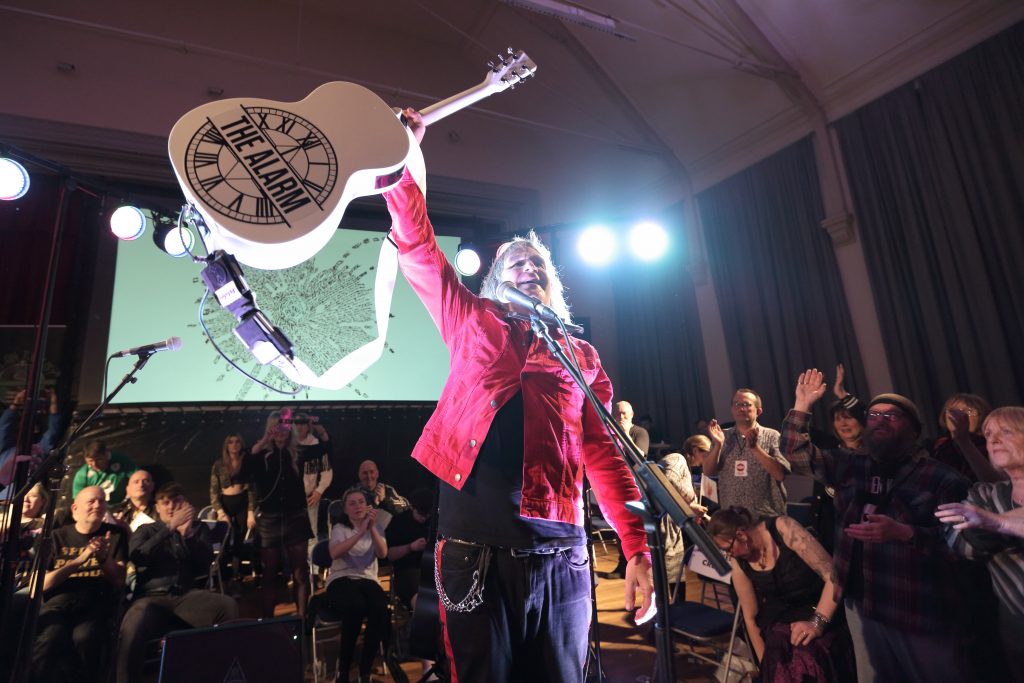 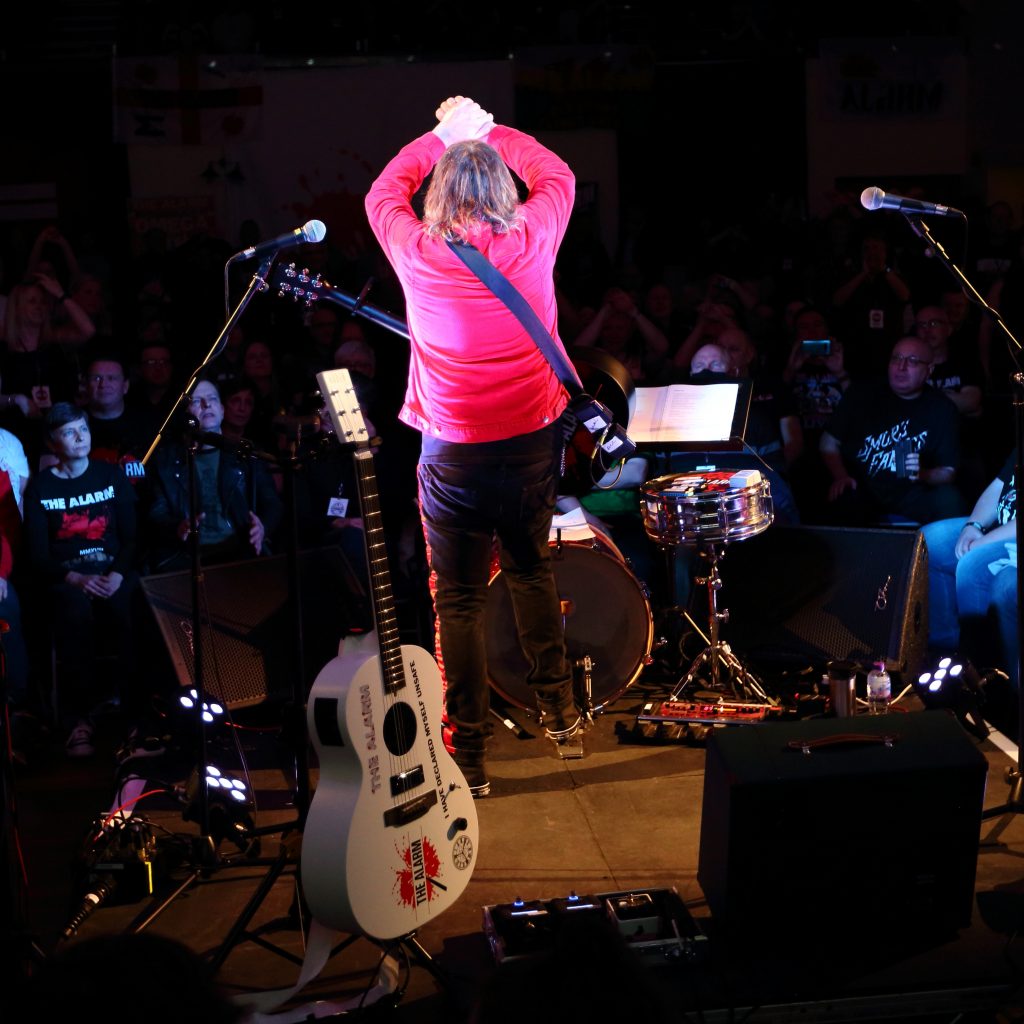 ABSOLUTE REALITY
THE CHANT HAS JUST BEGUN
DECLARATION
WHERE WERE YOU HIDING WHEN THE STORM BROKE?
THE DECEIVER
THIRD LIGHT
HOWLING WIND
WE ARE THE LIGHT
SIXTY EIGHT GUNS
BLAZE OF GLORY

THE STAND
MARCHING ON
UP FOR MURDER
UNSAFE BUILDING 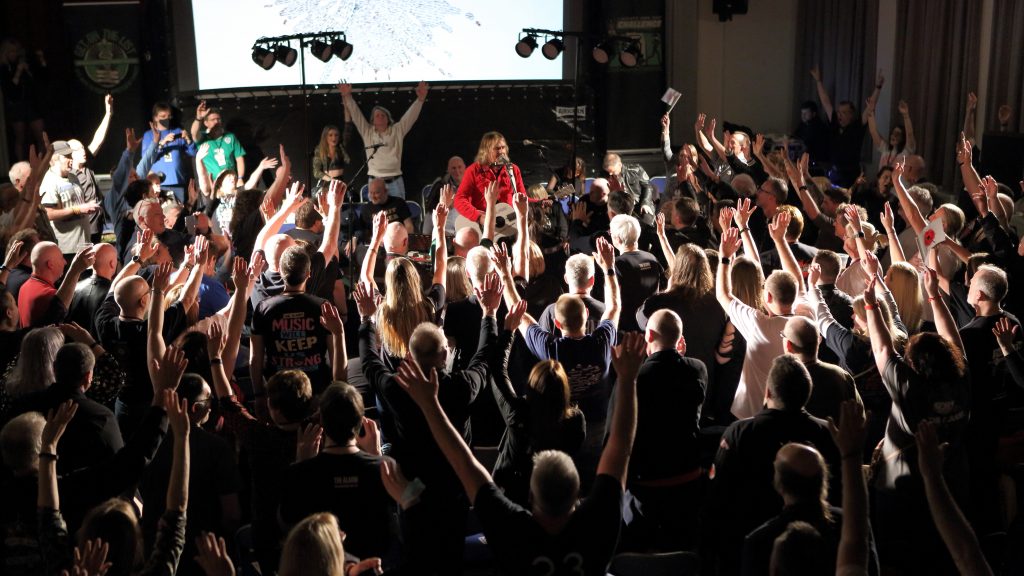 Sunday morning broke to with a beautiful North Wales day as people gathered outside the Royal Victoria Hotel where Mike gave an impromptu performance and talk about the first ever Alarm gig back on June 5th 1981. Mike gave everything he had even at this most non rock of roll of performance times playing Shout To The Devil, Pavilion Steps and Sixty Eight Guns. A moment of silence was called for to remember those we have lost through the pandemic or other tragic circumstances before the chords and lyrics of Unsafe Building permeated through the reverie. 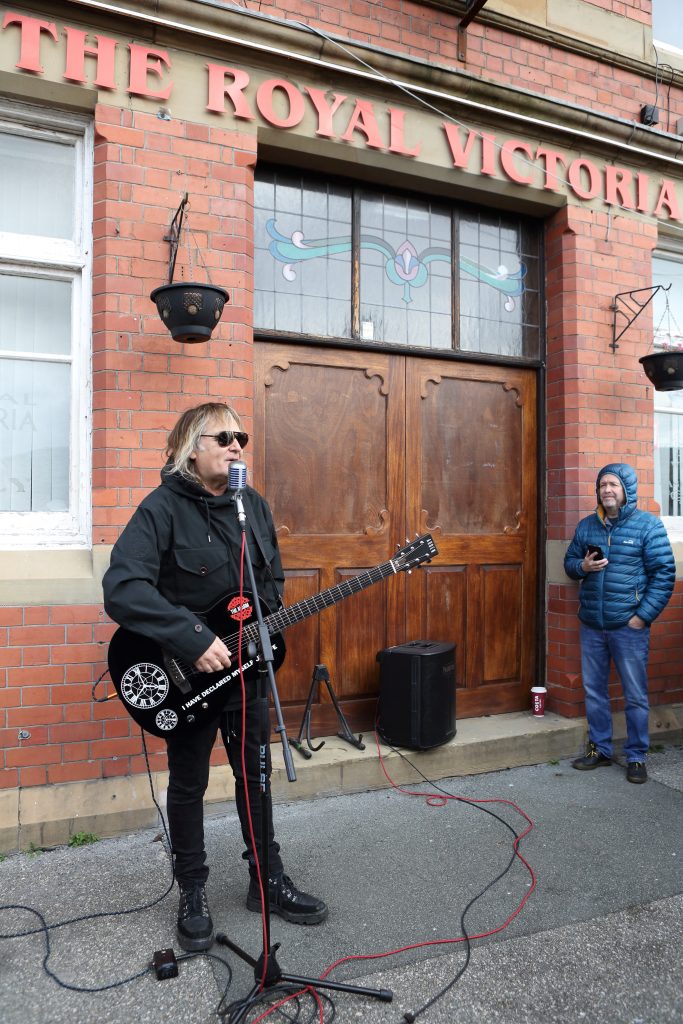 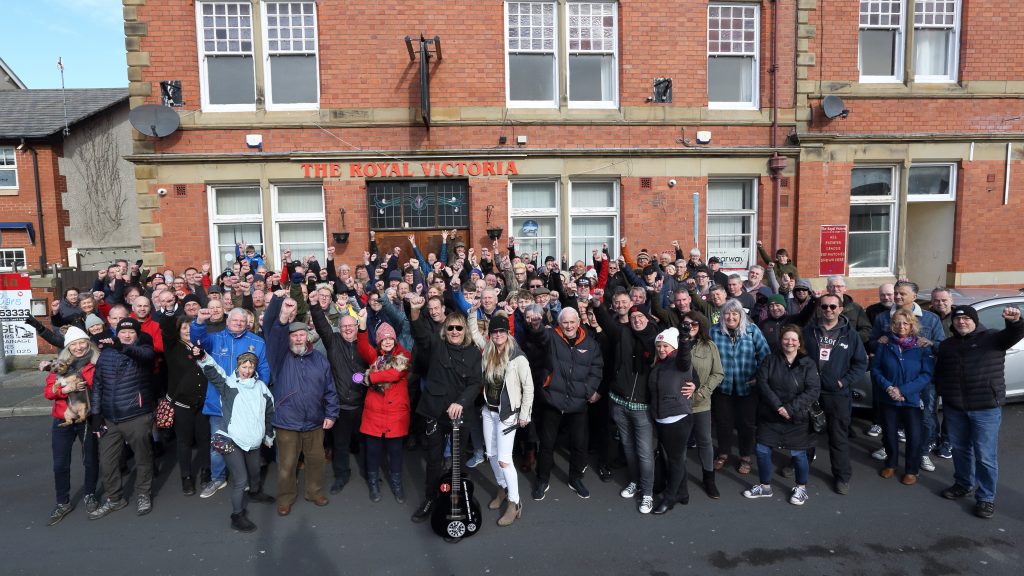 Everyone was invited back to Dyserth Waterfalls for a group photo and tour of The Alarm Chapel and soon to be renovated acquisition of The Red which is about to be converted into a hotel, coffee shop and bespoke music venue.

Mike and Jules showed everyone around and chatted for hours. It was a perfect way to spend a Gathering weekend and guess what……. this event does not conclude until April 15th 2023 when the band perform at St. David’s Hall in Cardiff!!!!! 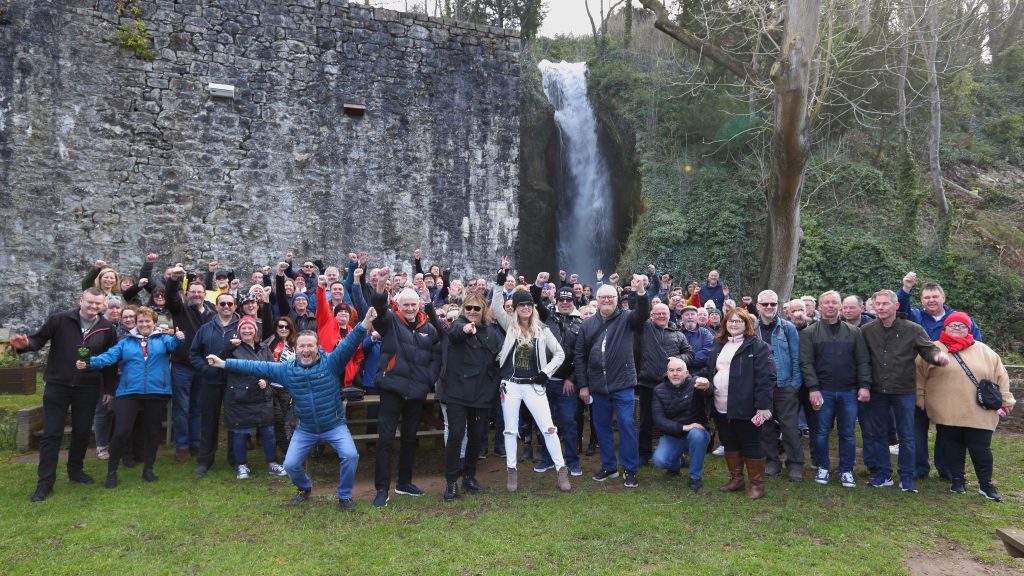