Tune in to www.periscope.tv/thealarm to watch Mike Peters perform live at 5:30 [BST[ today.

Today will mark The Alam’s very own ‘Record Store Release Day’ which will celebrate the vinyl, CD and online release of both ‘Strength [30th Anniversary]’ and Declaration [30th Anniversary]’ with both albums hitting record stores worldwide simultaneously.

Both Strength and Declaration [30th Anniversary] albums are available to purchase on iTunes and other online retailers for the very first time.

Remember the days when you used to get down to your local record store on a Monday eagerly anticipating getting a copy of the brand new Alarm album, well that day has come around today, and it’s a Friday!!… ready to kickstart the weekend and get you all fired up for the ‘once in a lifetime’ – Mike Peters and The Alarm concert at the Wales Millennium Centre, Cardiff next week on Saturday, October 10th 2015. 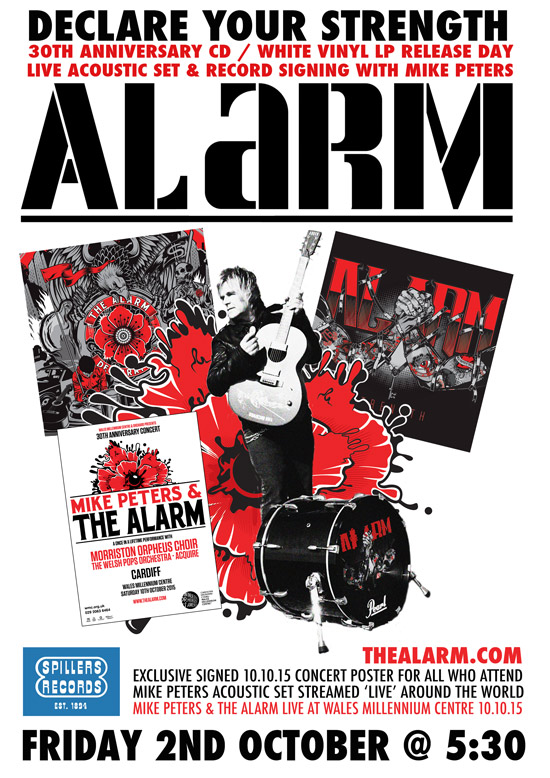 To celebrate the return of Alarm vinyl into record stores, Mike Peters will be hosting a very special ‘one and only’ in-store appearance at Spillers Records in Cardiff City Centre today at 5.30 – 7.00 PM which will be streamed ‘live’ around the globe via the internet with fans being able to interact direct with Mike Peters online

Mike Peters will be at Spillers Records, Cardiff to celebrate The Alarm’s Record Store Release Day in person, to sign copies of the ‘Strength 30th Anniversary’ White Vinyl LP and CD and also to perform a special acoustic set between 5.30 PM and 7.00 PM. [BST]

Tune in to www.persiscope.tv/thealarm to watch Mike Peters perform live at 5:30 [BST[ today.

All Alarm fans who visit the Spillers Records in-store and make a purchase will also receive a specially signed ‘exclusive’ poster of the Wales Millennium Centre concert that will take place on October 10th.

Arrange to meet your friends and family at your local record store to celebrate the ‘Strength 30th Anniversary’ and send thealarm.com an email (alarmcalling@mac.com), or text message to +44 1745 571571 including a photo of yourself with a copy of ‘Strength’ or ‘Declaration’ along with your phone number and receive an exclusive call back or text message from Mike Peters himself. 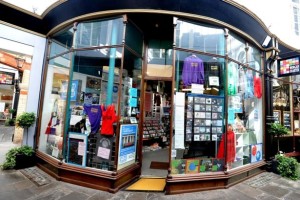 Spillers Records is located at 27, The Morgan Arcade, Cardiff CF10 1AF and is officially the world’s oldest record store since being opened in 1894. Spillers Records have continued to trade in music ever since from their premises in Cardiff and have always been very supportive of all Mike Peters / Alarm releases since ‘Unsafe Building’ back in 1981. 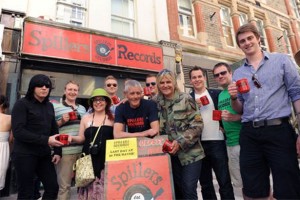 Spillers has knowledgeable staff who will be happy to help you, either in the store or at their website www.spillersrecords.com, they like records, tea and in-stores and if you bring them biscuits from Wally’s deli (in the arcade next door) they will like you a lot.

Being a “heavy metal kid” as I was growing up, The Alarm were a band merely in the peripheral vision of my music focus. The sort of band that I was aware were pretty decent and that I wouldn’t complain if someone whacked on at a party, but not one I’d invested my time or money in. Hence it’s not too surprising that the first time I sat down to listen to Strength, the band’s widely accepted “strongest moment”, it’s actually a 30th anniversary Mike Peters (singer and guitarist) re-recorded version which varies significantly from the original. More a new wave-based, but rock infused and pop capable outfit way back when, The Alarm at the time maintained their chart success in the UK through both “Spirit of ’76” and this album’s title track, but to many fans, the album they came from is the band’s finest. So is Mike Peters wise to continue his reworking programme, which begun with Declaration, where he rearranges, in some cases updates the lyrics and then presents the results in acoustic (although still full band) fashion?
Well on the strength of Strength 2015, I’d say pretty much so, for while purists may judder at the thought, what Peters has, aided by The Alarm members Smiley on drums and Mark Taylor on keyboards (and an extended cast of others) achieved, is to meld tracks like “Dawn Chorus” into string infused singer songwriter fare, while “Deeside” on the other hand finds Peters sounding like a stripped back Springsteen. “Strength” itself now kicks off with a striking resemblance to Neil Young’s “Needle And The Damage Done” before evolving into almost acoustic U2, whereas “Knife Edge” is probably the track with strongest links to the more raucous past, its Keith Moon drum clatter intro a real surge of energy.

Long term fans may be further thrown off that the track listing doesn’t follow that of the original release, or the 2000 reissue (which itself re-jigged the running order), although that does allow the new track, “Last Train” to be seamlessly integrated into the album rather than tacked on the end. And with it being a deep, meaningful piece from the same era as the original album it doesn’t feel at all out of place.

I wasn’t sure what to make of this album, or indeed the idea behind it when I first received this nicely packaged gatefold CD with all new art, and yet executive producer Jimmy Iovine (Tom Petty and so on – he was slated to be involved by the original but those plans were scuppered) ensures the Peters, Mark Warden, Smiley production sounds magnificent. Peters is in fine voice and the eye for detail displayed across the album also dismisses any fears of cash in, or meddling for meddlings sake. Fans may take a while to adjust, but I doubt they’ll be disappointed and as a casual observer I have to say I was more than pleasantly surprised.

Having received the recent The Alarm album Strength 2015 to review, and having rather enjoyed the experience, it felt right to delve back to the first in these reworked albums, Declaration 2014, which a year earlier also received the tear it down and rebuild it approach.

Back in 1984 this was the band’s debut full length effort and through “Sixty Eight Guns” and “Where Were You Hiding When The Storm Broke?”, announced them into the UK top 25 singles chart, the album itself reaching the heady heights of number 5 in the rankings. Using their new-wave influenced, with a touch of punk, pop and rock blueprint the band managed to appeal to a broad section of music lovers.

Here though, some thirty years on, mainman Mike Peters has, with aid of drummer Smiley, alongside Steve Allan Jones and Jules Jones Peters (both on backing vocals) completely reimagined not only those singles, but the whole album. With the big guitars thoroughly put away in their cases, acoustic is the main order of the day, and yet with many of the songs acquiring impressive choral arrangements, it’s arguable that many are, while stripped back, more grandiose than their originals.

The band’s biggest hit, “Sixty Eight Guns” becomes a strum along chant along, still proving engaging, if very different, while “Where Were You…” alludes to Neil Young via liberal use of harmonica. However with a lone bass drum, scraping rhythm and energetic choir, there’s a feel of the traditional folk/protest song about proceedings. Through Peters’ proud vocals, an air of U2 meets Springsteen is revealed in “Howling Wind”, while “Marching On” rumbles along on a keen beat, the choir once again sitting in the background.

Declaration 2014 makes a strong statement and one long time fans will have fun getting to know.