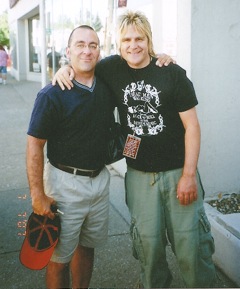 Well, that was it.  Mike Peters immediately became my hero.  I mean, this place- the Continental- was a certifiable dump. Buffalo is rundown.  It was on a Tuesday.  So, if this guy thinks playing at this dump, in this rundown town, on a lowly Tuesday night, was important?  Well, then you totally have my respect!
That night changed my life.  More than eight years later now, my Alarm “resume” reads as follows:  (I know it’s no where near the number of shows most of you in this forum have seen, but,…) I have now seen a total of five Mike Peters/The Alarm shows. March 4th, 2004, in Buffalo. July 7th, 2007 (yes- I saw The Alarm when the three sevens clashed!), also here in Buffalo, on the Rockin’ The Colonies tour.  (The photo I have attached of Mike and I, was taken the afternoon of that show.)  September 8th, 2010, in Hamilton, Ontario.  And, the next night, September 9th, 2010, again, here in Buffalo.  I also saw Mike perform with Los Mondo Bongo, in Toronto, Ontario, on March 15th of 2009.
As well, I now own every commercial release put out under the name of The Alarm.  I have since bought every cd, every box set, and every special release available on thealarm.com.  I bought the Counter Attack collective, the Poppyfields bond, the Alarm 2000 collection, which came with the incredible dedication cd (for you completists out there, the song I chose for him to perform on my dedication cd is “Be Still”, from “Under Attack”).   You name it, I bought it.  I bought every one of Mike’s solo albums.  I bought all the re-releases.  I bought Dave Sharp’s solo cd’s.  I bought Big Country releases with Mike’s participation.   I have the Christmas card from 2009 continually on display here at my home.  I have the aforementioned photo of Mike and I, as well as a photo taken with James Stevenson prior to the Hamilton 2010 gig, and one with Craig Adams prior to the Buffalo 2010 gig.  I have bought back-catalog collectibles no longer in print, on Ebay.  I have put in countless hours, learning every lyric, watching every interview I can find.  I’ve only been at it for just about nine years now, and I still feel like I just can’t get enough.
What has driven me to become the fan that I am, is, quite simply, Mike Peters.  The guy is such an incredible inspiration.  Of course, his successful battles with leukemia have been well-documented.  I mean, you don’t have to be a fan of The Alarm, to be inspired by someone/something like that. But, it’s more than that.  It’s his love, his passion, his drive that I’m so attracted to.  I realize now that those words Mike said to me on that Continental that night (“…They all are, mate…”) was such an accurate representation, of the Mike Peters that I would come to know and respect.   I love how he talks with genuine love for his former bandmates, Eddie, Twist, and Sharp.  I love how he holds the name of The Alarm so near and dear to his heart.  I love how he makes his fans feel like they really are important, and really did- and still do- play a role in the life of the band.
Incredible.  Just incredible.  Ten years ago, I knew nothing of The Alarm.  Now, at age 46, I can’t imagine my life without them.
I want to thank the staff at thealarm.com, for giving me the opportunity to share my “Alarm Story”.  I want to thank Joe, not only for our incredible friendship, but for convincing me to go to the Continental that night.  Heck, while I’m at it, I’ll even thank VH1, for airing “Bands Reunited” in the first place!!
Obviously, thank you so much, to Mike Peters, Eddie MacDonald, Nigel Twist, Dave Sharp, Craig Adams, James Stevenson, Steve Grantley, Smiley, and Mark Taylor.  Please know that the music you have created, has brought so much happiness into my life, and that you have my undying love and respect…