News Feed
Where to begin? I first came across the Alarm around 1984, hearing Declaration. I immediately gripped by the music – having previously been more attuned to the likes of Status Quo (though please don’t hold that against me!). I was especially taken with “The Stand” having only recently read the book from where the song was derived. Sadly, for one reason and another I didn’t get to see them live for a while – the first time was actually at Wembley with Status Quo(!) and Queen. If I wasn’t hooked before, I was after that. I saw them many times in the original guise after that, one that stands out was at The Octagon, Sheffield. I went with a mate, the band came on and I never saw him again that night due to the action “down the front”. That’s what Alarm gigs are about. After Mike left, I, like many others no doubt wondered what was next.
By chance one day I was back in Sheffield, looking in the window of an old record shop. To my surprise there was an advert for one Mike Peters and the Poets. Nottingham was selected as the gig to go to. Mike had obviously lost none of his passion – things were just beginning. I filled in the slip to join the mailing list of the MPO and I am proud to say I’ve got to know the backroom engine – Jules and Peter in particular. Over the years I’ve had many a chat with Peter, chewing over what Mike was up to, how our respective football teams were doing and generally putting the world to rights. He’s an amazing and lovely guy – if you ever get chance to have a chat, don’t pass it by. Jules is just the rock that Mike, the MPO and The Alarm of today are built on. Her tireless organisation of The Gathering, of tours and events, support of Mike are what has got Mike and The Alarm to where they are. All the hard work of Jules and the MPO is much appreciated by us all I’m sure.
My first Gathering was G5 – since then I’ve missed one – and they keep on getting better. I got to know Mike through the Sunday morning football that used to take place at The Gathering. For those of you not aware of that particular event, it took place on the Sunday morning and included a number of five aside teams, in various states of disarray from far too much falling down juice the night before and almost certainly not enough sleep. Certainly, not the kind of match preparation encouraged in the premier league these days. It was a knockout competition with the winning team getting trophies and, much more importantly, the chance to play the band……. The Message (my team) did reasonably well – I can remember playing the band on one occasion when Billy Duffy was around (bring back Coloursound I say!!). He had the ball and I, the less than average footballer that I am, thought I’d easily get the ball off him………… By the time I’d had the thought he was gone. It was only later I found out that he was a far better than average footballer!

It was in those earlyish days of Mike Peters solo artist that Feel Free was released, it’s poignancy obvious – tracks such as Regeneration referencing the illness that has followed him for many years. Anyone who has known Mike over the years knows that his energy seemingly has no bounds (a 4hour set at last year’s Gathering!!) – so he wasn’t going to let a small thing like cancer get in the way of his beloved music. The openness there has been over the years between Mike and Jules with us, the fans, has formed an enormously strong bond. We care for how Mike is doing, how Jules and the rest of the family are coping and Mike gets drive from the energy and love shown by the fans. Aside of attending The Gathering, I’ve seen the band and Mike solo on countless occasions sine that Nottingham gig. A few that stand out are
At the NEC supporting Status Quo (yes, them again!!). That was Mike where he belongs, on the big stage. We persuaded the resident “ShowSec” guy to allow us to leave our seats and stand at the barrier for their set (not normally allowed for the mere “support band”). It’s a measure of the man that there he was, on the biggest stage he’d played in a number of years and he was telling us the final score of our team’s (yes we share the same allegiance) game that day with hand signals. Amazing.
Alarm 2000 day. Mike, on stage, with only a handful of short breaks, playing every Alarm song there had been, telling stories, drinking Lem-Sip (other cold remedies are available J  ), taking the stage at 1pm and finally calling it a day at around 1am!!
Coloursound at the Gathering. The 40 minutes or so they did, completely unannounced, the music completely unknown still stands out to me as one of the best 40 minutes of live music I’ve witnessed
Manchester – on the “Saturday Gigs” tour 2006 where Mike announced he was in “Full and complete remission”. The cheering, applause, and happiness of that moment will stay with me for a very long time. It still makes the hairs on the back of my neck stand up when I listen to the album.
If you’re still reading, you may be wondering where all this meandering is heading………….. In amongst all this mayhem, music and football, the Love Hope Strength Foundation was formed to try and help other cancer sufferers get better treatment, around the world as well as in the UK and USA. Treks have been organised, mountains climbed, swabbing stalls have spread to gigs around the world, matches have been found, but I, to  my shame had done nothing to support the cause, other than the odd small donation here and there. I really do intend to do at least Snowdon Rocks next year!! But, I digress. I recently started playing the guitar, word of which got out at work (always dangerous!). There were many attempts to cajole me into a solo acoustic set one lunchtime – “on yer bike” I said (well. I am northern!). Not good enough for that yet. However, it transpired that of the other lads I sit near, another plays guitar, one plays bass and the other saxophone. (You’ll notice the lack of a singer…. That position is yet to be filled) So….. the idea of a gig was born. It would be my second performance in front of people – the first being at the Guitar Masterclass in January (if you don’t count being handed the tambourine by Smiley during the acoustic interlude at the Saturday night gig of the same weekend)….  It would only be short. It would definitely be amateur, but most importantly it would be for charity. LHS was the obvious choice. So…., 1 rehearsal was all that could be fitted in, a small entrance fee was charged and we rocked the place (for all of about 12 minutes – so some way to go to match Mr P’s 4 hours!!). We raised getting on for £100 in the process which wasn’t too bad for a lunchtime gig. We all enjoyed it, the people that came thought it was great fun – there are definite calls for another around Christmas. We weren’t quite “Four lads who shook the world” but we made the windows rattle!
So…. The point of all this waffle and trip down my Alarm memory lane is that we all know people who have been touched by the disease, some close, so if you play guitar, keyboard, trombone, recorder, kazoo…. Ask around, see if there are any like minded souls nearby and put something like this on. It doesn’t have to be top quality – it just needs to be fun, give a bit of entertainment and raise some money to help save those lives – as the line says – “One concert at a time” – make yours one of those concerts! 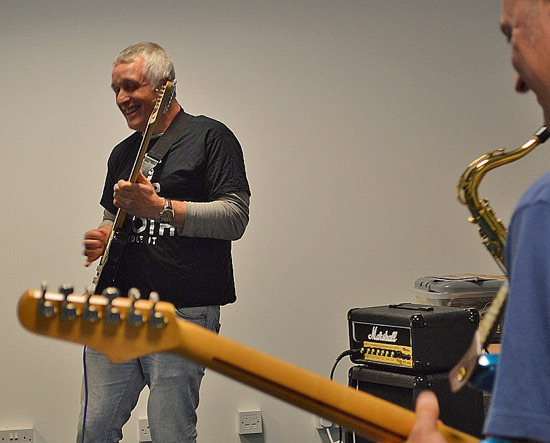