The Mike Peters acoustic concert at Sony Hall, New York City has now been rescheduled to June 12th 2020 with all original ticket sales remaining valid for the new date,

The Sony Hall concert will now take place on June 12th 2021,  exactly one week after the Mike Peters and The Alarm 40th Anniversary Concert at St. David’s Hall, Cardiff, Wales on June 5th 2020.

“I would like to thank all the USA fans for their patience and resolve”, says Mike Peters. “It’s taken a lot of effort on everybody’s part to keep the flame of hope alive in believing (as I do), that this show and other Mike Peters Acoustic USA shows in California, Hawaii and Boston will go ahead in 2021. There has been a lot to contend with  since the pandemic began and forced everyone to rethink their plans and I would like to personally thank my agent Rick Shoor in NYC for all his hard work in rebooking the NYC show for such an amazing date as June 12th 2021.”

All other Mike Peters Acoustic Dates in California, Hawaii and Boston, MA are now being rescheduled and we hope to be announcing new dates for 2021 very soon.

“I’m really pleased that we have been able to re-commit to having new dates in 2021”, continues Mike, “and rest assured, I will be pulling out all the stops to make sure the Sony Hall Concert on June 12th 2021 and all the others that are currently  being rescheduled, will turn into  incredibly memorable concerts for all concerned, especially as they will now take place during The Alarm’s 40th Anniversary year.  Music will keep us strong.” 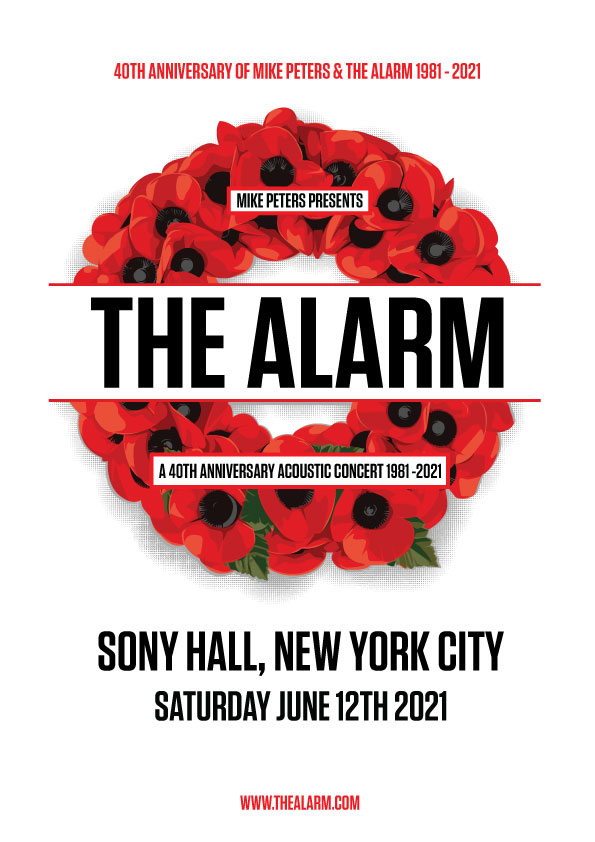