The final US dates of Mike Peters Declaration Tour has will conclude with dates at the Tupelo Music Hall in Londonderry, New Hampshire on September 19th and a much anticipated date at Johnny D’s in Boston, MA on September 20th 2014. 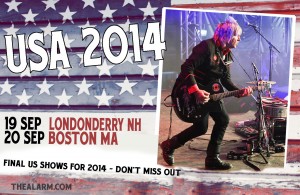 The US tour has been incredibly well received by both fans and critics as you can see from this great review from the Philadelphia show.

REVIEW – Mike Peters of The Alarm at World Cafe Live

The early 1980s was a time of idealism and optimism: The Soviet Union was teetering, the world economy was rebounding, and social activism was succeeding like never before, with events such as Live Aid.

No band captured the spirit of that time better than Welsh new-wavers The Alarm, and no album better than its 1984 full-length debut “Declaration.”

Three decades later, that time may seem far away and lost in an era of hopelessness.

But The Alarm singer and front man Mike Peters resurrected its spirit with a solo acoustic concert Aug. 6 at Philadelphia’s World Café Live in which he performed all 11 songs from  “Declaration” to mark its 30th anniversary, plus a handful of others.

The reason Peters was able to do that so convincingly is that the songs were so good in the first place, and the singer very much still believes in what he sang those years ago. And he’s maintained the talent to still sing it exceptionally well.

In a show that included 21 songs and stretched nearly 2 1/2 hours — Peters sincerely semed as if he didn’t want to stop – he not only sang the songs, but explained them, and in the process explained the history of The Alarm.

Alone on acoustic guitar, with a harmonica, kick-drum and the aid of looping technology, Peters told the nearly sold-out crowd he would “begin at the beginning” of meeting the band’s members at a clothing store at which he worked.

Her then sang the first two songs The Alarm ever wrote – “Declare Yourself an Unsafe Building” and the B-side “Up For Murder” – explaining how its sound evolved from punk to a “folk, early kind-of protest group” with interest in Bob Dylan, Pete Seeger and Woody Guthrie.

That gave way to “Take the Lie of the Land”  from the group’s self-titled debut EP, and then diving into “Declaration” with “Shout to the Devil.”

On all of them, Peters sang in an earnest, honest, unvarnished voice that became even more emphatic for “Shout to the Devil.” And by the time he sang “Where Were You Hiding When the Storm Broke,” the first single from “Declaration,” everyone was reminded just how good the songs are.

And Peters’ enthusiasm was infectious. The crowd, most of whom looked to be age contemporaries of the 55-year-old Peters, unabashedly joined in, and gleefully responded to the singer’s tossing a stack of cards to them on the line, “All cards are marked and all things will collide.”

Before “The Stand,” Peters recounted The Alarm’s close relationship with U2, and even with adding harmonica to the drum and guitar, he still managed to have his voice sound largely as it did back in the day – especially on the big finish.

On “Tell Me,” which he said is his favorite song on the disc, his voice was even more full of emotion. And on “Howling Wind,” which he said was inspired by the writings of Dylan Thomas, he added looped mandolin and sang with such earnestness, it was one of the night’s best.

Peters was perfectly right when he told the crowd it was “amazing how this relationship [with the audience] has stood the test of time .. and moved with the times.”

It was an explanation of how the songs to come have changed over the years, yet still fit the audience to which they’re sung. “We are the Light” was wholly changed to slow voice and guitar. “The Deceiver” was slow and intense. And “Third Light” became more abrasive and scolding. But all were perfectly aged, as with fine wine, so that they still spoke to the crowd’s also-changed perspective.

He sang what he said was an unabridged version of “Sixty-Eight Guns” – elongating it to 10 minutes by starting slow and studied and restoring a full verse before kicking in with a vengeance mid-song.

As if to emphasize “Declaration/Marchin On,” he held the guitar aloft to play, then finished the album with a great version of the anthem “Blaze of Glory.” The crowd, caught up in the mood and moment, gleefully sang along.

“Well, I’ve sung the songs I wanted to sing,” he told the audience. “How about you?” And they responded by shouting out requests. And he continued for nearly 40 minutes more.

He started with the obvious, a rousing version of “Spirit of ‘76” from “Strength,” the album that followed “Declaration” – “since this is Philadelphia and this truly is the spirit of ’76,” he said. Then “Rain in the Summertime,” The Alarm’s only Top 10 song in the United States.

He sang the title song from “Strength,” mixing it with George Harrison’s “Give Me Love,” then a wonderful version of Big Country’s “In a Big Country” – Peters replaced late singer Stuart Adamson for recent tours with the band – and a slow and gentle “Walk Forever by My Side.”

He closed with a very nice, more modern and upbeat “Love Hope and Strength,” the song from which Peters’ charitable foundation (he is living with leukemia), then “One Guitar,” before a brief reprise of “Blaze of Glory.”

“One Guitar,” with its stirring lyrics, “I’m a soldier marching in an army/I got no gun to shoot/All I’ve got is one guitar,” might best tell the position Peters holds today.

In this era of seeming hopelessness, he continues to battle on behalf of the spirit of idealism and optimism, and his weapon is one guitar.