The Mike Peters presents The Alarm Eye of The Hurricane – 30th Anniversary Acoustic Concerts at the iconic Norwegian Church in Cardiff Bay, Wales on the 1st, 2nd, 3rd, 4th and 5th of November have all SOLD OUT.

The intimate setting of the concert space will provide attendees with an unparalleled up close and personal concert experience as Mike Peters takes listeners on an acoustic story telling journey through the creative passage of self discovery that lies behind this most enduring of Alarm albums and into the Eye Of The Hurricane itself.

Each concert will feature two sets with the second performance made up of audience requests and other hallmarked songs that Mike Peters and The Alarm are known for throughout the world.

Every ticket holder will have the chance to meet with Mike throughout the course of the evening and also take part in a question and answer session following the first performance of ‘Eye Of The Hurricane’.

Ticket holders will also qualify for a limited edition signed poster – unique to the 30th Anniversary ‘Eye Of The Hurricane’ concert performance at the Norwegian Church. 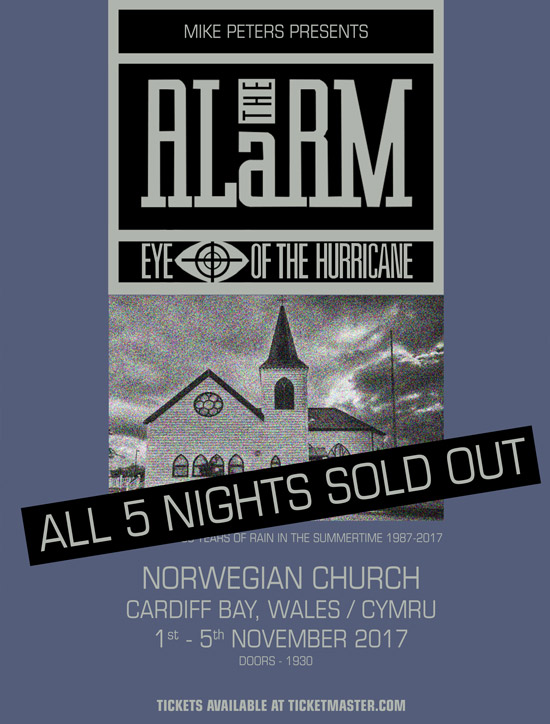 Originally released in October 1987, Eye Of The Hurricane is one of The Alarm’s most celebrated and best selling albums and features the perennial Rain In The Summertime, along with live classics Rescue Me, Shelter and One Step Closer To Home.

Continuing a modern tradition of honouring all the Alarm 30th Anniversary eras, Mike Peters will once again be re-imagining some of the Eye of the Hurricane songs and arrangements, and also taking a deeper look into the beginnings of a creative journey that would ultimately lead himself and the band through a trilogy of recordings that began with 1987’s Eye Of The Hurricane through to the Electric Folklore staging post and beyond into the maelstrom of 1989’s Change / Newid.

A musical odyssey that in its own way, came to simultaneously document a man and a nation both, coming to terms with identity and a need to better understand their place in a world made different by new values and generational differences.

Armed with voice, acoustic guitar, harmonica and bass drum, Mike Peters will endeavour to set this amazing musical journey into a modern context by performing all of the Eye Of The Hurricane songs alongside some additional unheard material that had come to life during Mike Peters sojourn through Wales between the autumn of 1986 and the spring of 1987. 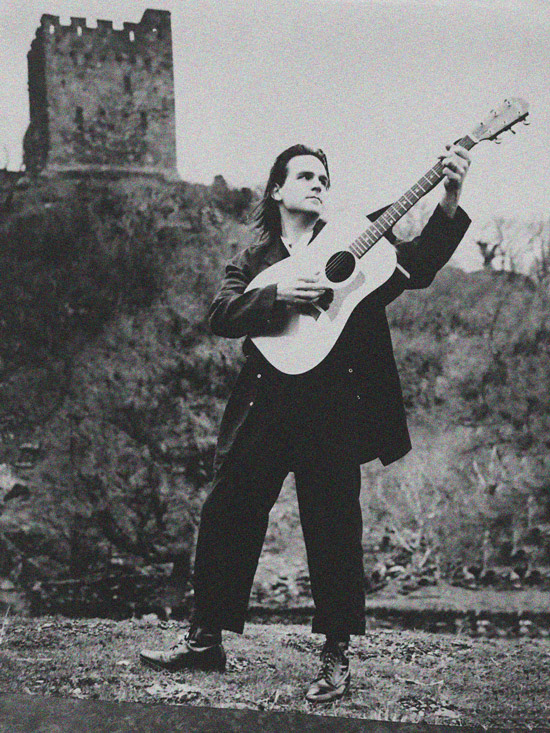 Following a series of landmark Alarm gigs in both the USA (Spirit Of ’86 Concert in California – April ’86) and Great Britain (Wembley Stadium – July ’86), Mike Peters returned home to Wales and spent the rest of the year travelling through and re/discovering his home country, from North to South, East to West and back again, all the while creating new music and lyrics while filming everything he surveyed with a basic VHS VideoCam recorder.

Coinciding with the death throes of the industrial era and the beginnings of the new information age, Mike Peters travelog would ultimately give rise to an air of self discovery and identity renewal for a band in need of a new dawn and at the same time, documenting the rebirth of a nation ready to throw down the shackles of it’s past.