Mike Peters Declaration shows in the UK and USA are selling out. In the USA, both concert appearances in New York at the Iridium on March 15th have completely sold out after extra tickets were released last week due to public demand.

Following on from earlier sell outs in Glasgow, London in the UK shows at Korks in Otley, Yorkshire and the Bristol Thunderbolt have both sold out.

Ticket sales all across the UK are doing really well especially Edinburgh, Manchester and Newcastle and more shows are expected to reach capacity as the tour nears its opening night this Friday at the O2 Academy in Liverpool.

Mike Peters / Alarm fans who are intending to visit other shows on the tour are being advised to purchase tickets in advance in order to avoid disappointment.

“Don’t say I didn’t warn you, this prophecy is coming true. I can hear the cavalry thundering, riding over the hill” 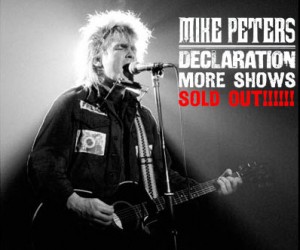