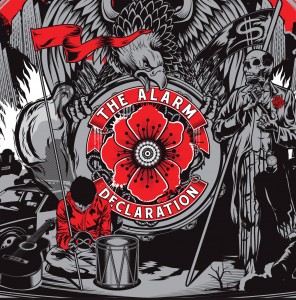 The Alarm – Declaration and Declaration Collection (Limited Edition of 300) is available to order now (February 13th 2014), exactly 30 years to the day since the original album was released to dramatic effect in 1984.
This time around, fans are still guaranteed an equally exciting listening experience. Everyone who delves into this 21st Century version of Declaration, will be able to hear the album in a totally new way, with all twelve songs being recorded afresh by the band’s singer and songwriter Mike Peters. “I like to take from the past and have it inform and direct the future. Take one step back, to go two steps forward if you like,” says Peters. “I felt like a part of the band’s spirit had been left behind during the recording of the original that effectively turned The Alarm from an alt-folk acoustic protest group into an electric stadium rock band capable of breaking around the world. In that respect, the original album is still as great as it ever was, but most definitely of its time sonically.”
Stripped down and set free of the original arrangements, the songs on Declaration 2014 have been able to move with the times and are as relevant to life today as they were when written in the early 1980’s. “I felt like I could make a special record by treating the songs as if they had been written now,” continues Peters. “It wasn’t an easy process and I very nearly turned back a few times along the way. I had to take a very disciplined approach that was governed by the first principle The Alarm ever had, and that was to make music with an acoustic guitar, drum, harmonica and voice”.
Since the arrival of the White Stripes, Black Keys, Mumford & Sons etc, the world has now become accustomed to bands without a bass which is also the sonic blueprint for this ‘new’ Alarm album. “In 1981-1982, no one, not least me, understood how to make the sound of a band work without a bass guitar in the centre of the stereo picture. Now (with only The Alarm’s versatile drummer Smiley), I was able to use the studio to create a record that is not only the sound of The Alarm’s original vision but also a sound that is totally in line with contemporary trends, proving that The Alarm’s music has, and can, stand the test of time.”
No song has been left untouched.’The Stand (Prophecy)’ has now been recorded and included in full four verse form for Declaration 2014. “1984 was an era when bands left their singles off LP’s” says the singer, “and The Alarm adhered to that in general even though we all wanted ‘The Stand’ (which had been a 1983 hit in the USA), to be included. To compromise, we included the fourth verse that was not used in the single version at the time.”
Both ‘The Deceiver’ and ‘Sixty Eight Guns’ have extra verses added and the version of ’68’ on the CD literally explodes into life at the midway point and is surely destined to breathe new life into the way fans react to this monolithic Alarm song. “The original ‘Sixty Eight’ was a narrative inspired by a book called ‘A Glasgow Street Gang Observed’ and although I presented the lyric accordingly on the original sleeve, I always felts something was missing. As time passed, I began to realise that I had taken out the wrong verse when making the song shorter. Here in 2014, I had an opportunity to put that right and present the song with the complete lyric and a more sympathetic storytelling arrangement.”
Declaration 2014 features an unexpected yet most welcome collaboration with Acquire Choir (a community singing group from the village of Rhuddlan in North Wales). “I had an instinct to include a gospel choir,” remarks Peters, “I wanted a sound to represent the soul of the audience who have lived every word on Declaration and whose singing is a huge part of every show The Alarm play. The choir sessions were conducted in church and they were a most beautiful experience in itself. Once I heard Acquire sing ‘Blaze Of Glory’ I knew the album was going to be something beyond what I had dared hope for”.
The title track ‘Declaration’ features ‘Ghostbuskers’, another community group of musicians from North Wales. “That was the one song I did not know what to do with,” says Peters. “I was actually going to leave it off altogether. I was at Tape Studios, North Wales getting ready to rehearse for The Gathering, when I heard about this community group which featured over 30 guitar, ukulele and mandolin players…. I was intrigued. I paid them a visit and we cut ‘Declaration’ in one take with my two young boys Dylan and Evan joining in on guitar too. It’s a beautiful sound and the last one committed to the record and fitting in that, for me at least, it creates an audible link to the community that is The Alarm and its extended family”.

The album’s artwork has even had a major overhaul and is no less impressive. “I met a young designer named Daniel Shearn who has done some sterling work in graphics for film and theatre companies I was aware of, and commissioned him to redraw a new Declaration sleeve. I was not expecting the vision he brought to the project. As soon as I saw what Daniel had done, I could see instantly that he had kept the integrity of the original and added to it. It totally works with the new album, yet still reflects the spirit of the original most beautifully”.
To further augment the authenticity of this new Declaration era, Mike Peters has cut a special 15 track companion disc of b-sides and non-album songs entitled ‘Peace Train’, which takes its cue from the ‘words without music’ that were included on the original Declaration sleeve art. ‘Peace Train’ takes hold of all the songs that helped to shape the original Alarm era as defined by ‘Declaration’. According to Mike Peters, “All of the songs on ‘Peace Train could easily have been included on the original album had circumstances been different.” 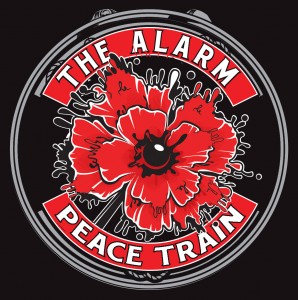 Highlights include a first ever studio recording of the legendary early Alarm song ‘Mister Jones’ (which was only ever performed once at the band’s second ever gig in St. Asaph, 1981). Other notable performances include a spoken word and drum rendition of the title track plus contemporary re-recordings of ‘Reason 41’, ‘Across The Border’ and ‘What Kind Of Hell’ plus versions of the late Pete Seeger / Idris Davies classic ‘Bells Of Rhymney’, Woody Guthrie’s ‘This Train Is Bound For Glory’ and Rod Stewarts’s Maggie May, all three of which, were songs performed during encores at Alarm shows throughout 1984.
For those Alarm fans who have come to love the band through the Poppy Fields recordings (or more recently through the exposure afforded to the band in the aftermath of the ‘Vinyl’ movie), Declaration 2014 presents an opportunity to embrace a part of the band’s history that was special to a first generation of fans who have and still support the group to this very day. “Of course, for some, it will represent a trip down memory lane, for others it will be a chance to celebrate something that has value and integrity, a music that has stayed with us through the walk of life we have all lived since we first came into contact with Declaration either in the writing or the listening.”
‘Take this song of freedom put it on and arm yourself for the fight, our hearts must have the courage to keep on marching on and on’ – The Alarm – Declaration 2014.
Click here for the Alarm store
Declaration Collection Limited Edition (300 Copies – Vinyl LP signed by Mike Peters).
Purchase the Declaration Collection Limited Edition (Vinyl LP signed by Mike Peters) and receive £5 discount and FREE POSTAGE.
Declaration CD – Single Compact Disc in Full Colour Gatefold Sleeve with full colour lyric booklet (Includes full length version of ‘Sixty Eight Guns’, ‘The Stand’ and ‘The Deceiver’. (£17.99 + p&p)

Declaration LP – A Limited Edition of 300 copies on ‘Red’ Vinyl (140gsm) . Full Colour Gatefold and Inner Sleeve. Original album track sequence including ‘The Stand (Prophecy)’, ‘Sixty Eight Guns’ (Original Lyric Version) and ‘The Deceiver’ (Original Lyric Version). (£29.99 + p&p). NB: Only available as part of the Declaration Collection Limited Edition.
Declaration 2014 – CD Tracklisting
Shout To The Devil
Where Were You Hiding When The Storm Broke?
The Stand (Full Length Version)
Tell Me
Howling Wind
Blaze Of Glory
Third Light
The Deceiver (Long Version)
Sixty Eight Guns (Long Version)
Declaration
Marching On
We Are The Light
Declaration 2014 – LP Tracklisting
Side One
Declaration
Marching On
Where Were You Hiding When The Storm Broke?
Third Light
Sixty Eight Guns (Original Lyric Version)
We Are The Light
Side Two
Shout To The Devil
Blaze Of Glory
Tell Me
The Deceiver (Original Lyric Version)
The Stand (Prophecy Version)
Howling Wind
Peace Train – CD Tracklisting
Peace Train
Unsafe Building
Up For Murder
Mister Jones
For Freedom
Reason 41
Lie Of The Land
Across The Border
Thoughts Of A Young Man (Part One)
Pavilion Steps
What Kind Of Hell
Second Generation
Bound For Glory
Bells Of Rhymney
Maggie May