The Mike Peters Declaration show at King Tuts in Glasgow has completely sold out almost four months in advance. 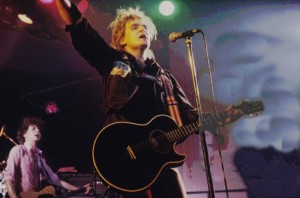 Mike Peters / Alarm fans who are intending to visit other shows on the tour are now being advised to purchase tickets in advance in order to avoid disappointment. Ticket outlets all over the country are reporting excellent sales for all shows (especially the London date for March 7th which only has a few tickets remaining).

“All cards are marked, all fates will collide”