Day nine of the By Your Side walk began in the reception area of Ysbyty Gwynedd Hospital for the official opening of the newly refurbished Alaw Unit.

Many dignitaries, hospital officials, doctors, nurses and major fundraisers gathered together for a series of speeches and talks on the capabilities of the new unit. It was an emotional moment for some of the individuals and charity members, many of whom had first campaigned for the Alaw Unit as far back as the late 1960’s. It was especially poignant for all those who have pioneered and supported the long term development of what is regarded as the major cancer centre for people living in North West Wales.

Thousands and thousands of people owe their lives to the dedication and selflessness of the specialists on the Alaw Unit who have continually brought many individuals like Mike and Jules, back from the brink of despair (the kind of which only a cancer diagnosis can induce), to eventually recover and live normal and healthy lives.

“It is a special place“, as Mike Peters testified during his own address, making reference to the many experiences he has been through since first being treated here in 2005. A performance of ‘Forever By Your Side’ brought powerful emotions to the fore.

D.J. Wynne Evans from BBC Radio Wales, who had been broadcasting live on air throughout the morning, interviewed Mike and Jules at length about the weeks events, along with other patients, volunteers and staff, including the much loved Reverend Wynne Roberts – the hospital chaplain who is also known as the singing Elvis Presley to his legion of fans.

The broadcast came to a close with Mike Peters joined by pupils of Ysgol Hafod Lon which is a special needs school from the local area to sing a bilingual version of ‘Love Hope Strength / Cariad”. The ensemble brought tears to people’s eyes as the children used sign language to emphasis the lyrics and despite some very obvious challenges, were able to sing lead vocals and harmony. It was very beautiful, and intensely moving.

Mike and Jules were then joined by their children Dylan (13), and Evan (10), as it was time for the procession to leave the hospital and begin the journey to Caernarfon. The morning’s wet weather front had moved on, and so a dry and cloudy sky welcomed the walkers back onto the trail as they headed West, in the direction of Y Felinheli / Port Dinorwic.

The harbour village of Y Felinheli is situated on the south shores of the Menai Straits and it was here, that the group gathered for a small respite and refreshment stop. Photos were taken on the harbour jetty and soon the band of brothers and sisters where back on the main coastal path into Caernarfon.

Just outside the town itself, hundreds of school children from the area, joined in for the final mile to the magnificent medieval fortress of Caernarfon Castle.

As the By Your Side pilgrims entered through and in amongst the towering castle walls the all female choir of Cor Cofnod and brass band of PontNewydd School created a musical welcome for one and all.

Group shots were taken and Mike Peters gave a final thank you speech and performance of Love Hope Strength with the choir, before heading for a buffet and drinks provided by the owners and staff at the Castle Hotel in Caernarfon town square.

Day ten begins and ends in the mountain town of Llanberis for Snowdon Rocks. 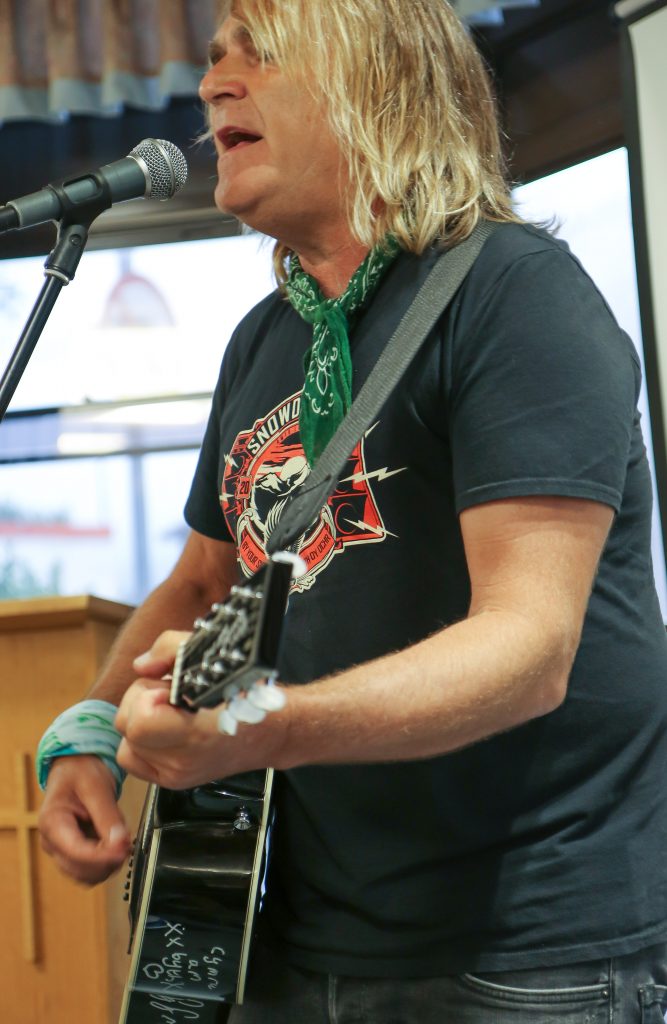 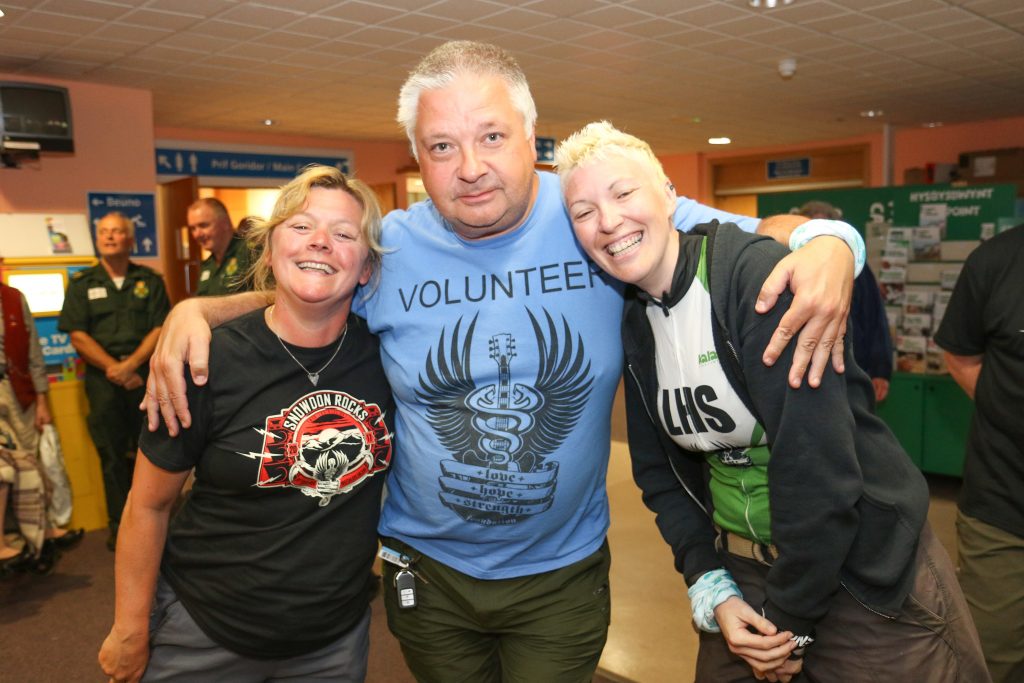 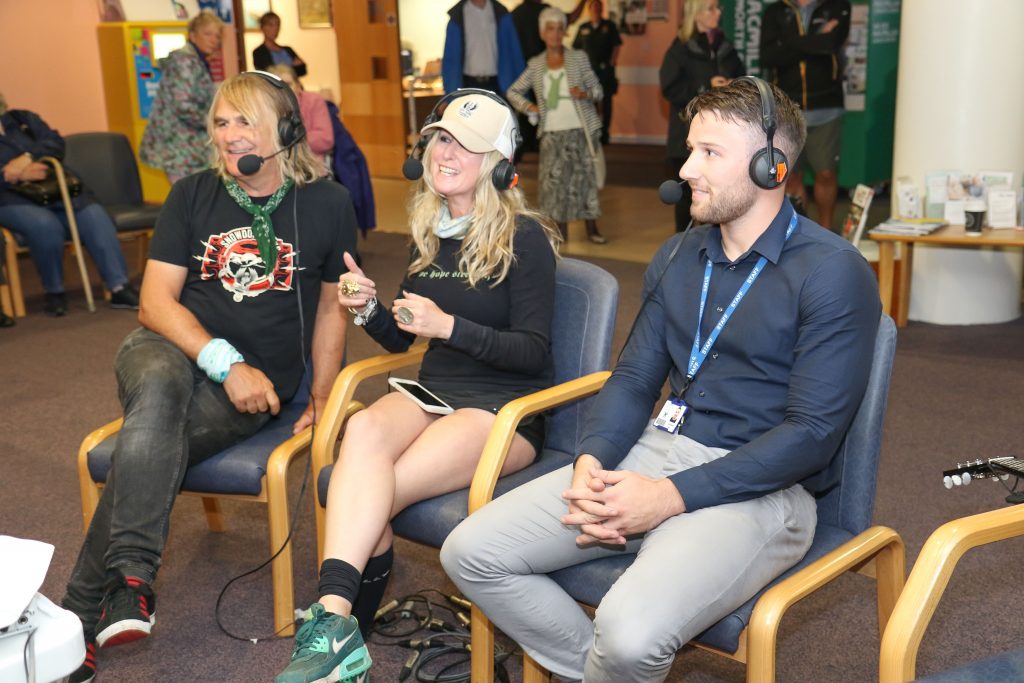 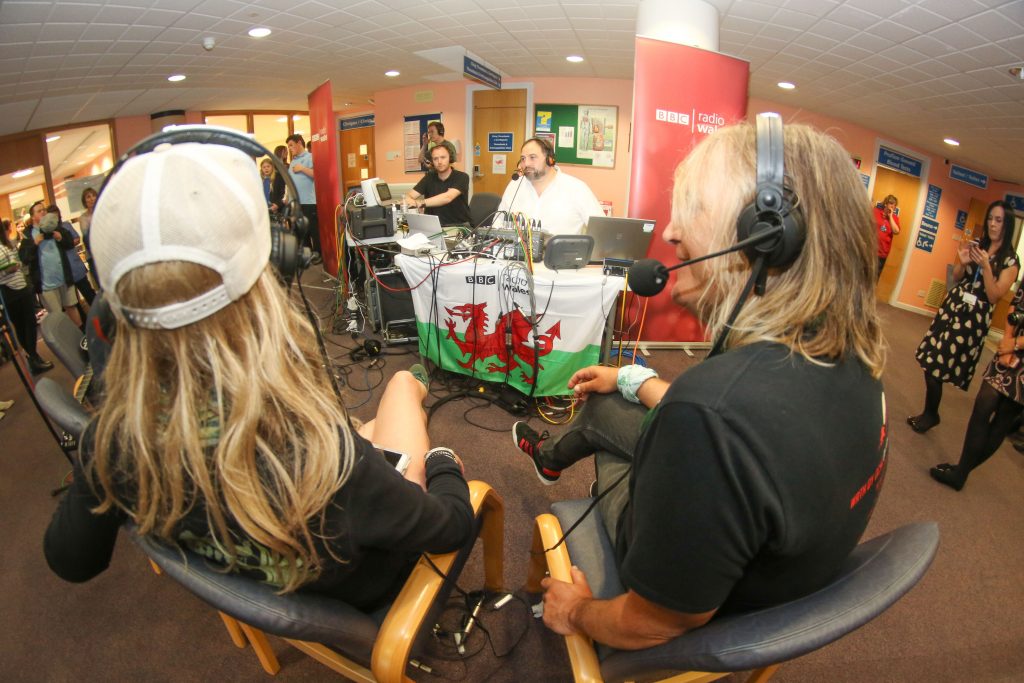 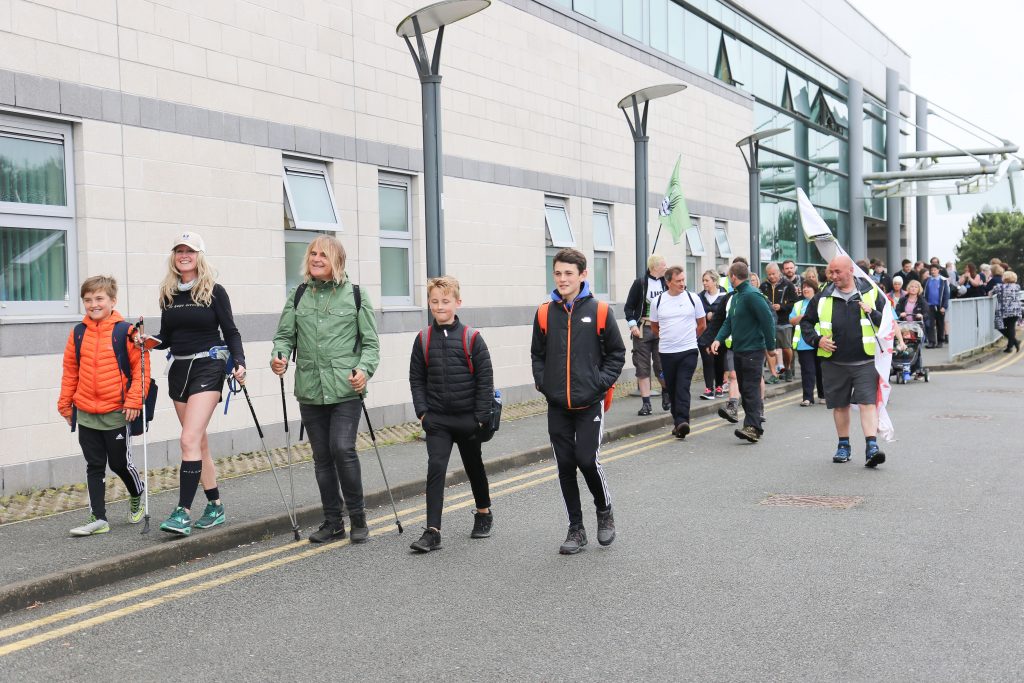 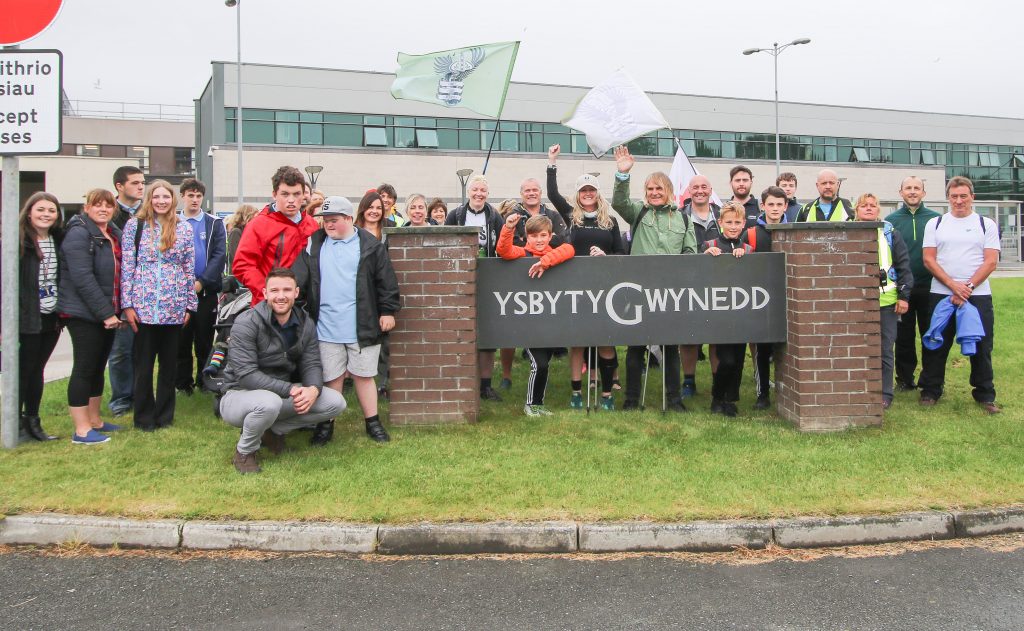 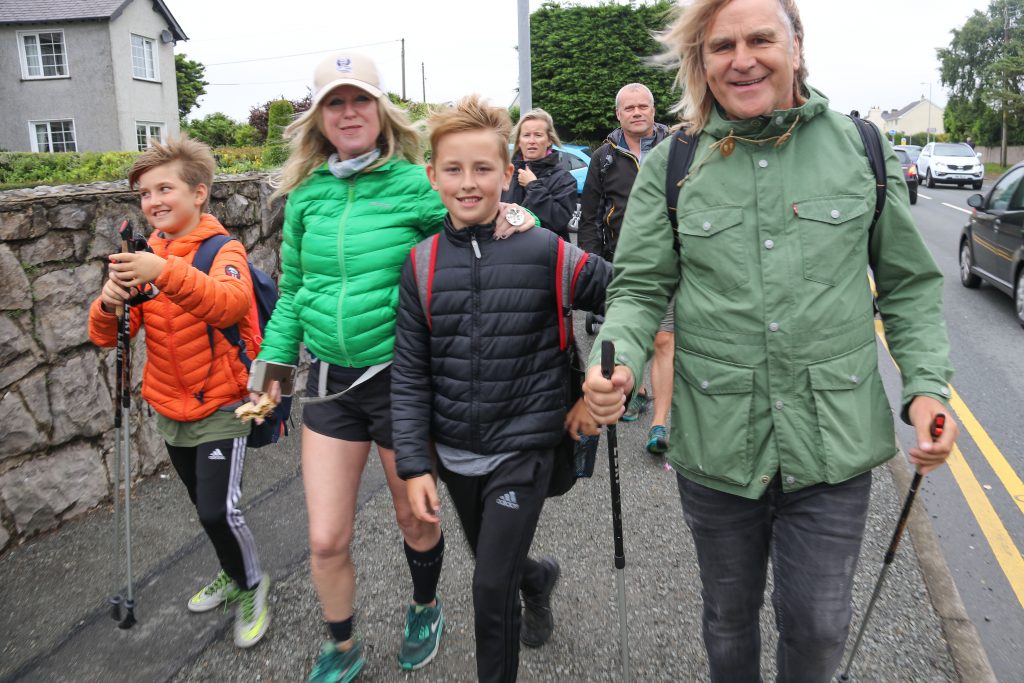 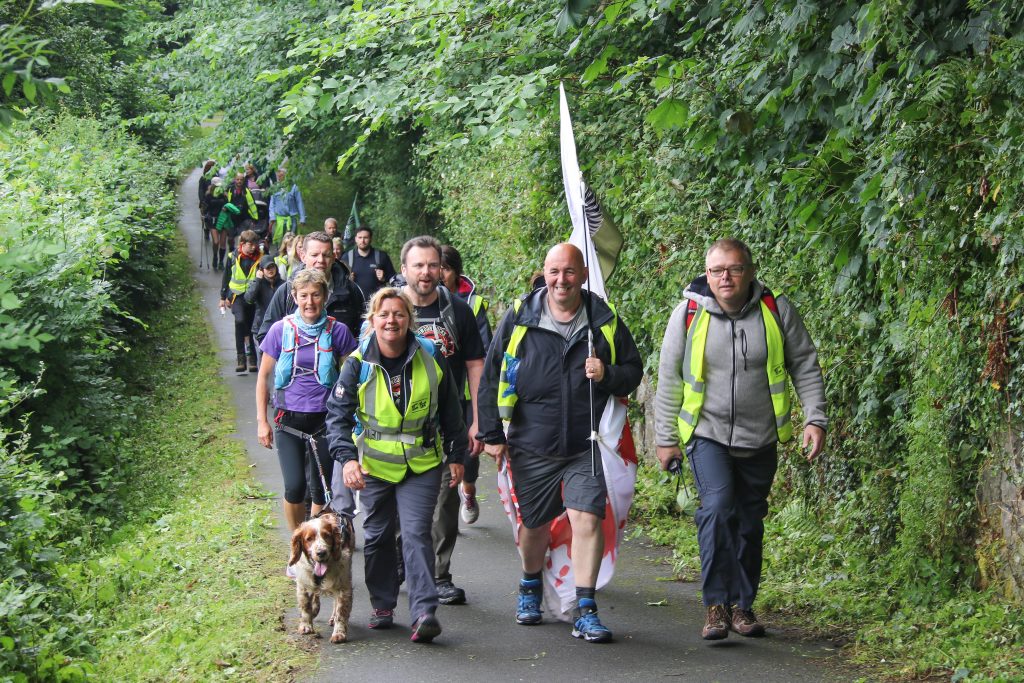 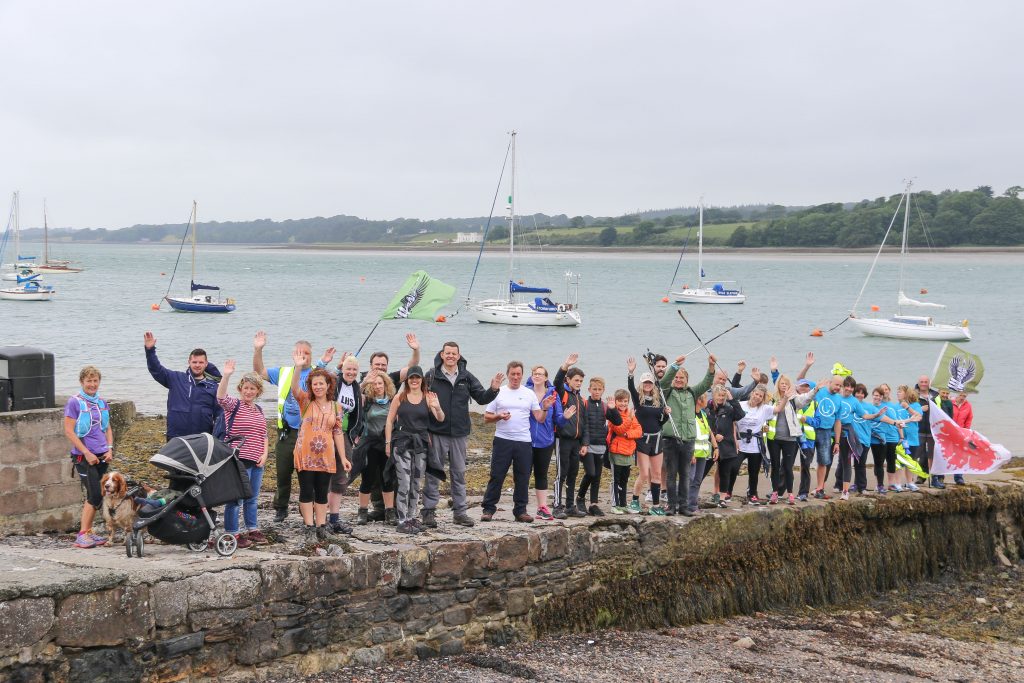 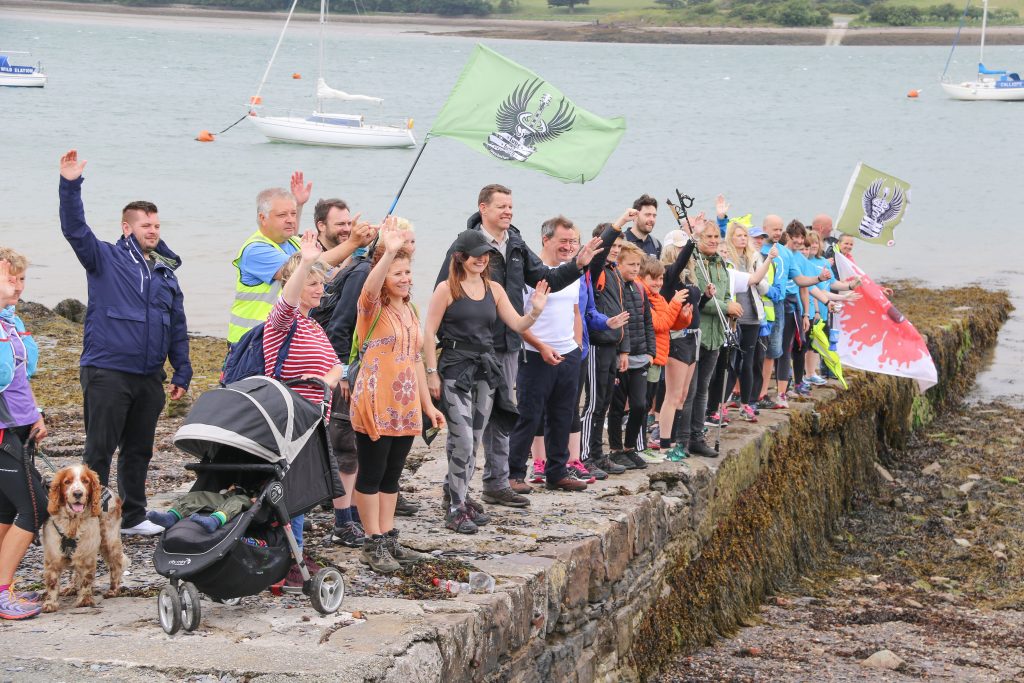 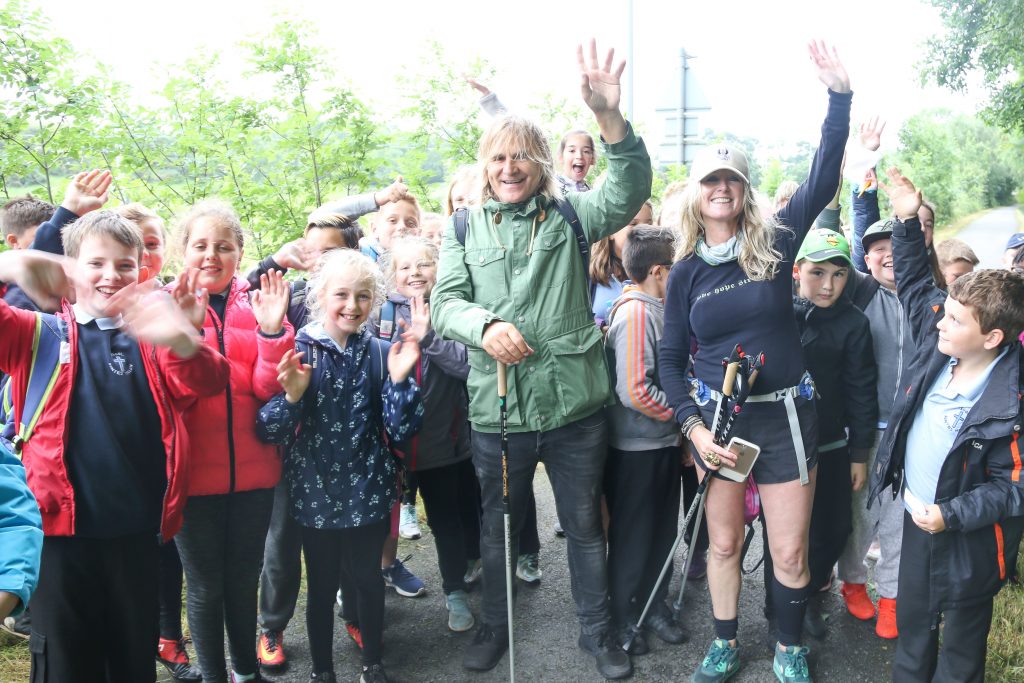 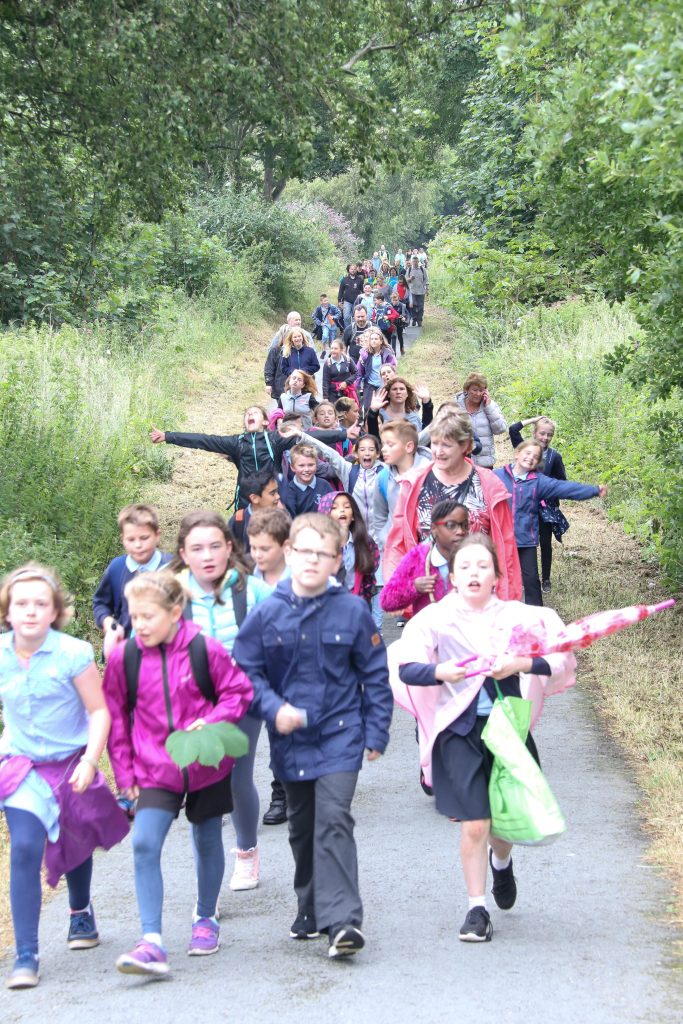 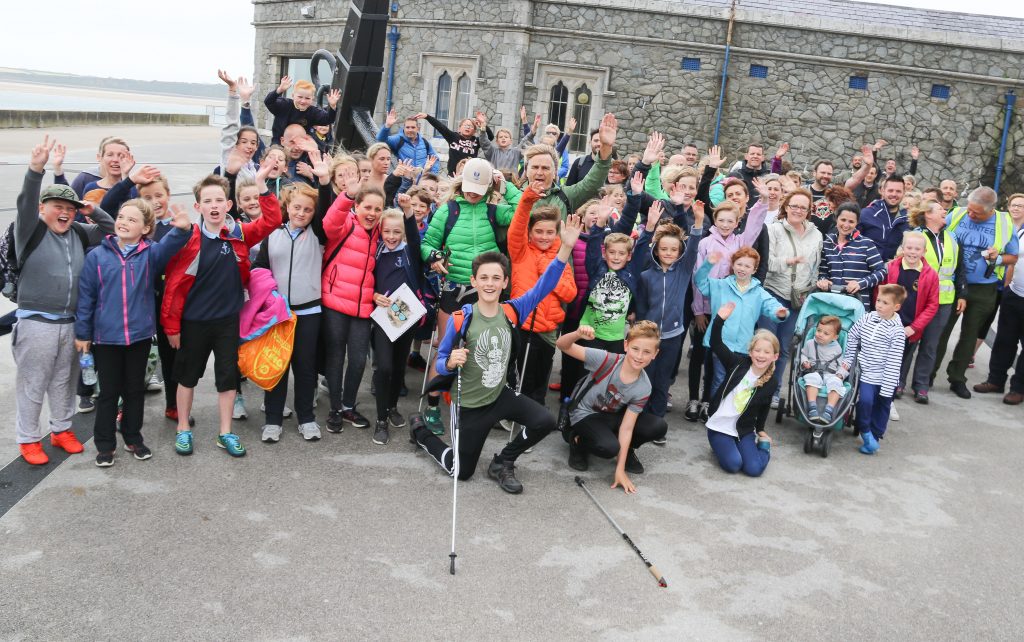 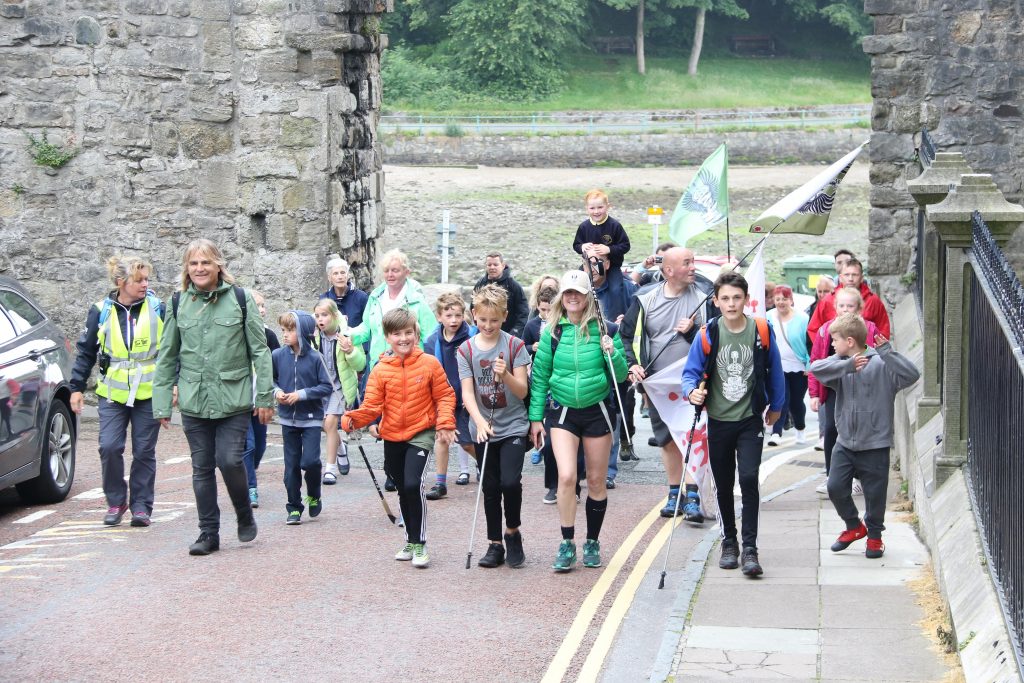 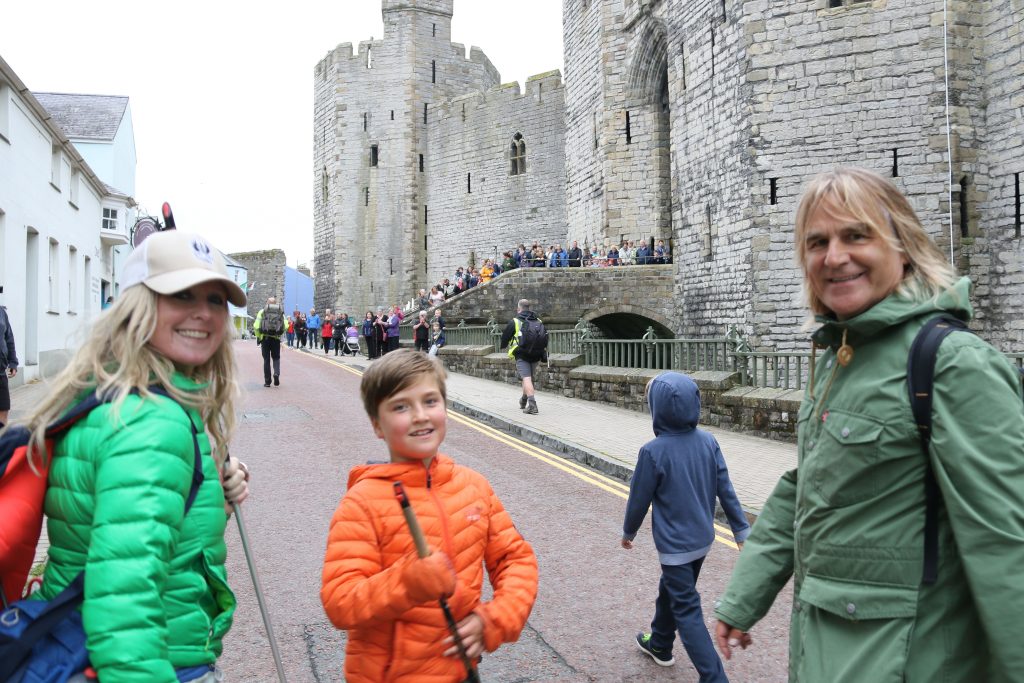 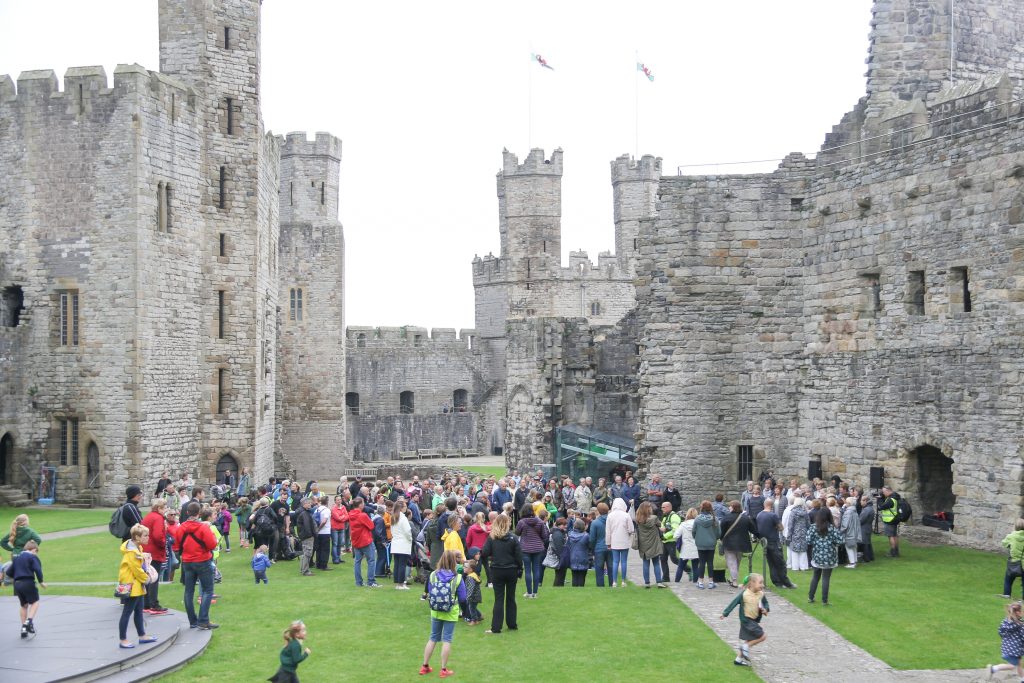 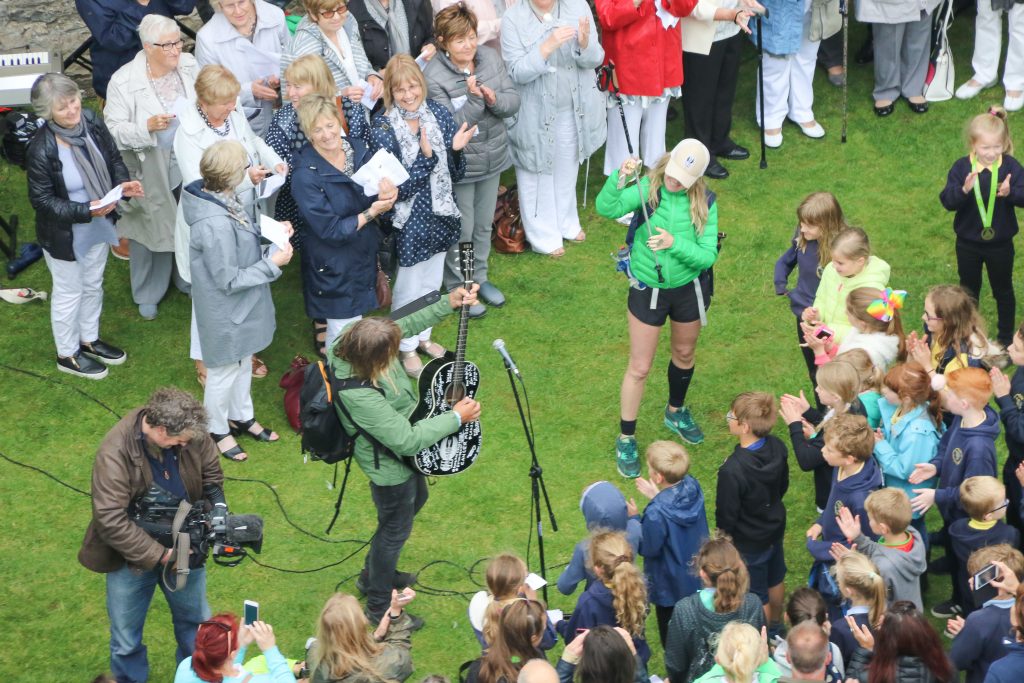 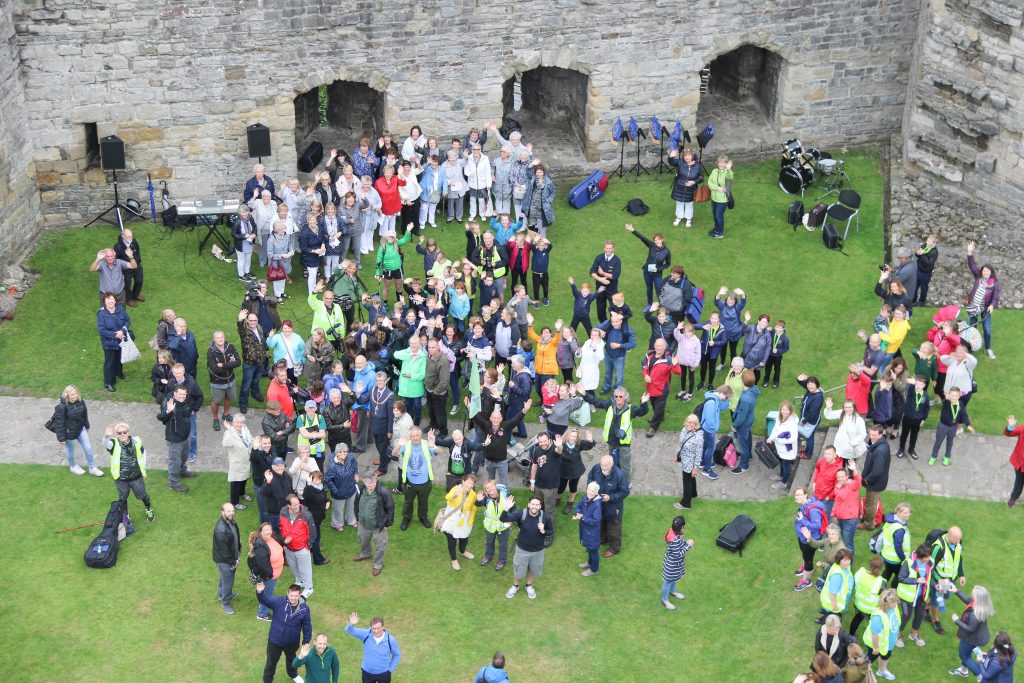 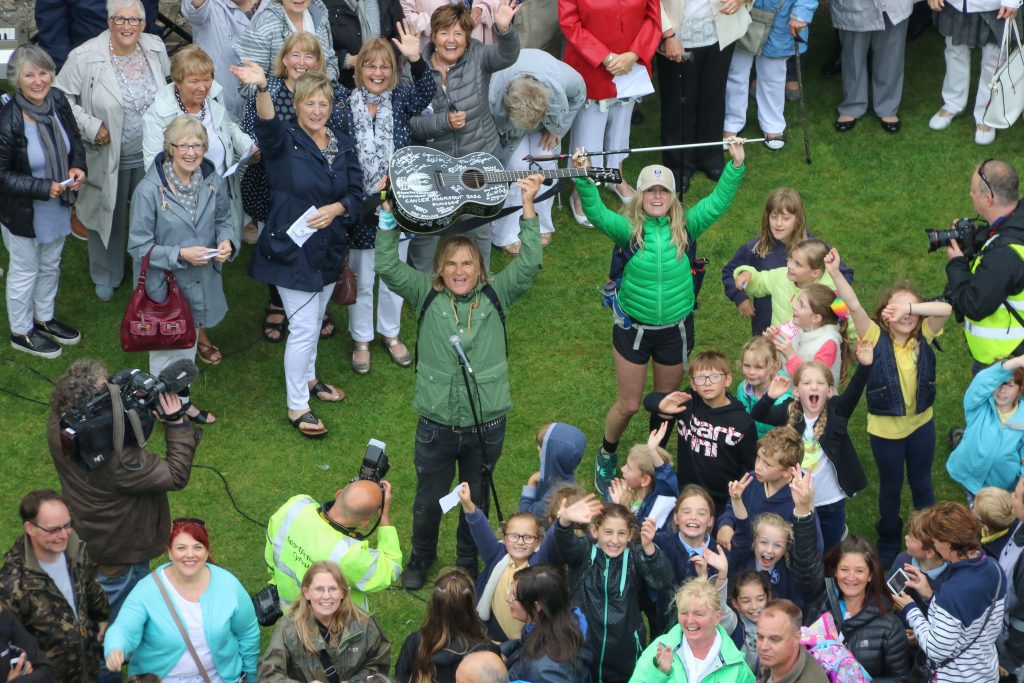