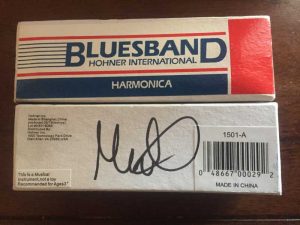 Season 2 of the only podcast dedicated to The Alarm, Never Let The Fires Die has launched on iTunes ,  Google Play and Youtube.com.  Last season the podcast covered everything from lost Alarm demos to  exclusrive interviews, from live tour reports, to stories about love hope and strength. This season begins with two new episodes from podcast hosts, creators and engineers, Steve Fulton and Jeff Fulton :  A Family Visit To The Van’s Warped Tour, and Forgotten Songs From The ITPF Bond.

To promote this new season, we are holding a contest.   The winner will receive a signed Mike Peters Hohner Harmonica (left).

Here is the contest:

New episode descriptions are below.

Between 2001 and 2003, Mike Peters and his new version of The Alarm demoed and recorded 50 songs that formed basis of the next 1/2 decade of music from The Alarm. “The Bond” was the name of the subscription fans could buy-into so they could receive the songs as they were recorded. In all 11 full electric demos (unreleased), and 5 full albums were produced as part of the The bond, plus countless acoustic demos. The songs went-on the form the basis of the albums “In The Poppy Fields” (2004) and “Under Attack” (2006). In the process, some of those tracks got lost in the dustbin of history. In this episode, we dust off some of those tracks “lost to the fog of time”, and create an album from the “Forgotten Tracks Of The In The Poppy Fields Bond” . All of the songs mentioned in this episode can be owned by purchasing the “In The Poppy Fields Collected Works” CD/DVD set on thealarm.com : https://thealarm.myshopify.com/produc…

On August 6th, 2017 I took my family to The Van’s Warped Tour stop in Pomona, CA.   Obviously, we went to see The Alarm, but I also wanted my kids to experience a modern “punk” show and get their reaction.  This is the story of our day.