After a swathe of excellent Britsh media reviews ‘Vinyl – The Movie’ is to be released in Europe on DVD this July 15th 2013.
Pre-order your copy in advance with MPO and receive a ‘Signed by Mike Peters’ edition of the original CD single that started it all – ’45 RPM’ by The Poppy Fields (aka The Alarm in disguise). 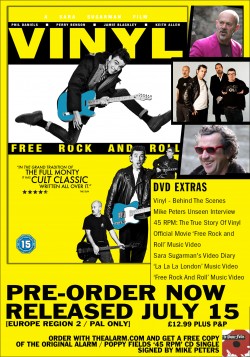 An Vinyl Bundle Package is also available that will include all of the above plus a Vinyl Tour T-shirt and The Alarm’s award winning ‘Vinyl’ soundtrack album. 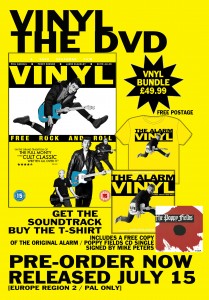 Bundle priced £49.99 plus free postage (which represents a considerable saving on the price of the individual items).

VINYL – BEHIND THE SCENES

45RPM: THE TRUE STORY OF VINYL

‘FREE ROCK AND ROLL’ MUSIC VIDEO BY THE ALARM