The Alarm’s Mike Peters says he and his music have had a spiritual home in Denver since 1983.

Mike Peters co-founded the Denver-headquartered cancer charity Love Hope Strength in 2007, but the Welsh musician’s ties to the city date all the way back to 1983, when his new-wave rock band the Alarm came to the U.S. for the first time, with U2. The Alarm was scheduled to play before U2 at Red Rocks, in a show that would be immortalized in the documentary U2 Live at Red Rocks: Under a Blood Red Sky — but Colorado weather disrupted that brush with glory when torrential rain canceled the opening set. Despite that disappointment, Peters says that the following day in the Mile High City was nearly as meaningful and memorable for the band.

“We had the day off, so we went to see Return of the Jedi at a cinema in Denver,” he remembers. “Eddie [MacDonald], our bass player at the time, was suffering from culture shock, and he didn’t like America. So all of us went to see Return of the Jedi except for Eddie, who went to get some heels put on his shoes. We thought, what a strange thing to do on your third day in America — but that was what he wanted.”

When Peters, guitarist Dave Sharp and drummer Nigel Twist went to buy their tickets, the woman working at the counter took one look at their get-ups and giant hair and called the manager over to determine whether they could be let into the theater. Peters then spoke with the manager, who laughed and said, “What are you guys doing with a British accent, dressed the way you are, coming to see Return of the Jedi?”

The manager had some reservations, but he allowed the musicians to go in as long as they sat in the balcony. After the film, they emerged to discover that MacDonald had been running the air-conditioning in the band’s van, which had killed the battery. “And so we tried to jump-start it, and because in Britain it’s the wrong way around, we actually blew the engine,” Peters says.

As Peters recalls, it was some sort of holiday, and they couldn’t get anyone out to fix the van. They told the theater manager, who invited the band to stay the night at his house. “His mum made us breakfast the next day,” Peters says. “We all had breakfast on this deck, and we thought, ‘Wow, this is America. We’ve arrived!’

“We settled into America right there and then,” he continues. “And it happened in Denver, Colorado, with Return of the Jedi as a theme tune. We saw the human side of America in Denver.”

The Alarm returned to Denver various times throughout the ’80s, playing venues like the Rainbow Music Hall and the Paramount Theatre. The Mile High City became a sort of spiritual home for the band.

Music may have been the vehicle through which Peters has connected with people around the globe, but it has also been a salvation for him since he was diagnosed with lymphoma in 1995. Ten years later, while recovering from that disease, he was diagnosed with leukemia. Peters says that for him, immersing himself in music is the best drug there is. 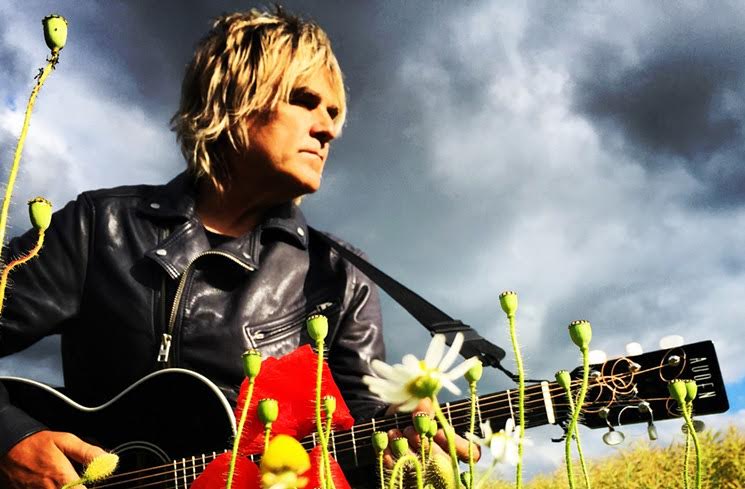 “Being in Denver is a very special place now in the world for me, because a lot of what Love Hope Strength has become started in Colorado,” Peters says. “Our office for North America has always been based in Denver. A little bit of the culture in Denver — the atmosphere of the city — runs through our charity. Some of our best supporters live in that part of the world. Some great ideas have come up from working in all the venues in Denver, particularly at Red Rocks.”

Love Hope Strength runs bone-marrow drives and sets up booths at local venues where they swab the inside of people’s cheeks and add them to the national bone-marrow registry. Through these efforts, Peters says, the organization has signed up more than 120,000 people to the database, which has resulted in over 2,000 matches for people who need marrow transplants.

Love Hope Strength’s name is taken from the Alarm song “Strength,” from the 1985 album of the same name. “When it was written, it had that line ‘Who will be the lifeblood coursing through my veins,’” Peters says. “I didn’t realize how that would come back around in such a dynamic way in my life. Now we’re helping find people who need lifeblood to stay alive. We’re spreading ‘love, hope, strength’ physically through the charity, and spiritually through our message, and emotionally through bringing people together at gigs to support what we do.”