Twenty First Century is proud to announce details of The Alarm ‘Vinyl Tour’ 2013!

Read on for all the latest on Vinyl, the movie, the soundtrack album and the Tour!!! 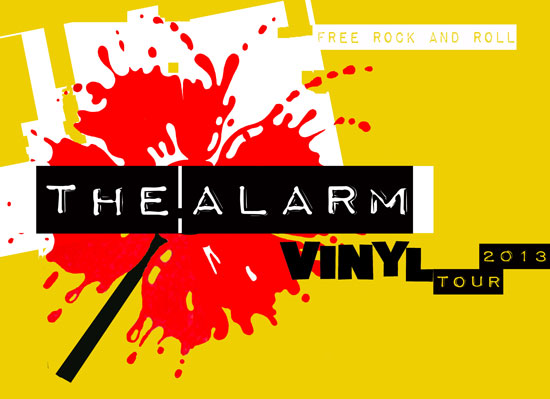 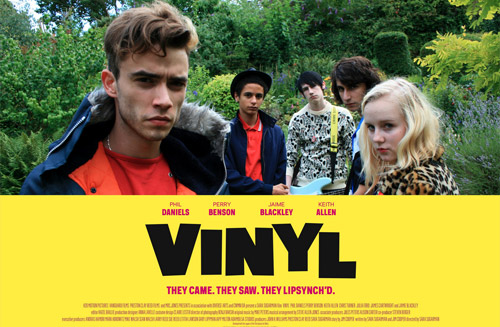 On March 4th 2013, perennial Welsh rockers The Alarm will release a brand new album, ‘Vinyl’. The album also provides the soundtrack for much anticipated feature film ‘Vinyl’ starring Phil Daniels (Quadrophenia / Blur), Keith Allen, Perry Benson and Jamie Blackley (Snow White and the Huntsman) which will be released in cinemas nationwide from March 15th. The Alarm will also begin a UK tour in Bournemouth on February 28th alongside the release of new EP ‘Free Rock And Roll’ which also happens to be the main song featured in the film.

‘Vinyl’ – The film is loosely based on a true life 2004 incident when The Alarm released their single ’45 RPM’ under the cover of a new ‘young’ fictitious group called the ‘Poppy Fields’. The single gained significant airplay and charted in the UK Top 30, duping the entire British music industry along the way and causing an international news sensation that resulted in the band’s subterfuge grabbing the headlines on a global scale. The subsequent movie based on this incident ‘Vinyl’, was directed by Sara Sugarman (Very Annie Mary, Confessions of A Teenage Drama Queen), and produced by John H. Williams (Shrek) with Preston Clay Reed.

POSTMODERN SURFER – “Director Sara Sugarman’s fresh, funny, film delves into the misdirection of today’s spotlight on the young rather than the talented, and the role of technology in today’s music industry”.

‘Vinyl’ – The Soundtrack Album features a collection of new Alarm songs composed specifically for the film such as the movie’s thematic anthem ‘Free Rock And Roll’ which was recorded by The Alarm with ‘Vinyl’ star Phil Daniels dueting with founder member and lead vocalist Mike Peters. Along with a clutch of vibrant power pop punk songs which all clock in at under three minutes, ‘Vinyl’ will be released everywhere on March 4th to coincide with a major UK tour that will promote the film alongside it’s debut in UK cinemas. An EP single ‘Free Rock And Roll’ will also be released on January 28th accompanied by a national press and TV campaign fronted by both cast of film and The Alarm combined.

“On August 18th 1979, I travelled to London to see Phil Daniels star in ‘Quadrophenia’ at a cinema on Oxford Street and then took the tube to Wembley to see The Who perform the soundtrack live, ‘Vinyl’ provides Alarm and film fans with a similar opportunity to see the movie and then hear the soundtrack at the same time. It’s going to be an amazing and one-off experience that will hopefully unite fans of cinema and rock and roll in an interesting way” says Mike Peters.

SANTA BARBARA INDEPENDENT – “VINYL has plenty of pluck, verve, and punchlines, not to mention a fiendishly catchy anthem in ‘Free Rock and Roll.'”

‘Vinyl ‘ – The film which has just been awarded ‘Best Feature’ and ‘Best Screenplay’ at the Los Angeles Independent Film Awards in Hollywood and has been creating a buzz at other US film festivals such as CBGB and Woodstock throughout the summer with it’s engaging story of burnt out rocker Johnny Jones (Phil Daniels), who hoodwinks top record labels, radio DJs and the entire rock music world by releasing his new pop punk single under a fictitious teenage band’s name……now he just needs to teach Drainpipe, the hired in young singer (Jamie Balckley) and a rowdy bunch of auditioned kids what true punk spirit is all about!

‘Vinyl ‘ – The tour will feature The Alarm taking to the stage after a short ‘Vinyl’ trailer to perform songs that feature in the movie alongside a host of the band’s classic hits such as ‘Sixty Eight Guns’, ‘Rain In The Summertime’ and the autobiographical ‘Spirit Of ’76’. The Alarm exploded onto the global music scene following their initial breakthrough in America with ‘The Stand’ which was followed by their first appearance on Top Of The Pops in September 1983 playing their signature song ‘Sixty Eight Guns’. Since then, The Alarm have gone on to score 17 Top 50 UK singles, a host of successful albums and over 5 million record sales worldwide. Lead singer Mike Peters (who also performs guest vocal duties with Scottish celt-rockers Big Country), is a two times cancer survivor and founder of the world’s leading rock and roll cancer foundation Love Hope Strength.

VARIETY FILM REVIEW – “VINYL is a genial underdog’s revenge comedy about some old punkers who fool the industry that’s forgotten them into promoting their new single …lovely and likable….[the cast] is colourful and energetic”.

SANTA BARBARA INDEPENDENT – “The film takes cunning slices at the music biz, but gets by pure ebullient spirit, the whole cast and crew feel like they were enjoying themselves inordinately making a film in which where sex and drugs have become Viagra and rock and roll is all a big, merry swindle.”

INDIE FILM GURU – “The film keeps up a brisk pace with its punk-influenced soundtrack. [Sugarman] keeps the scenes light in the script.”