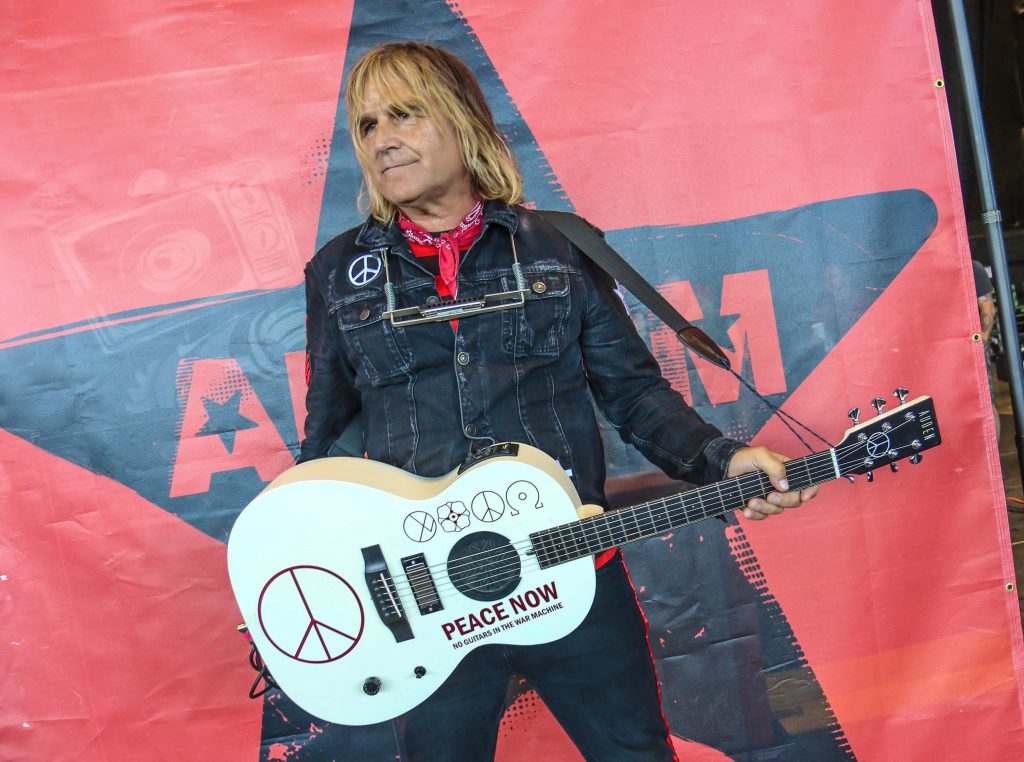 Both The Alarm and film – Man In the Camo Jacket are receiving a lot of very favourable coverage over here in the USA as the current Tour 2017 continues it’s way across the United States.

A special feature on AOL Build with moderator Mark Goodman hosted from the AOL Studios in New York City is a must see.

Band appearances on Philadelphia’s RADIO 1045 and a Mike Peters solo slot on NYC’s Out of the Box with Jonathan Clarke provide deep insights and some fascinating song performances.

Other press highlights include the Los Angeles Times picking out Man In The Camo Jacket as Documentary DVD of the week and highlighting the screening at the Los Angeles Grammy Museum on August 3rd. There’s also lengthy features in music industry bible Billboard Magazine and LRM Online. 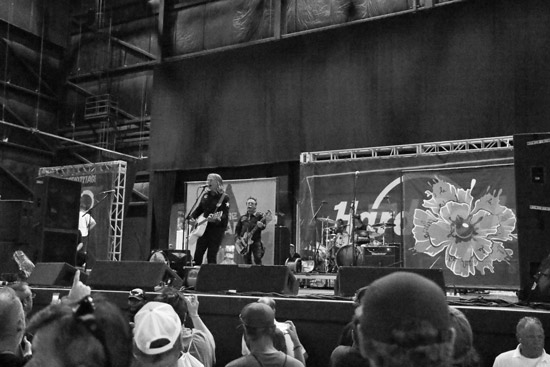 The band are currently performing their final shows of the Vans Warped Tour [Part One], where they have been joined on stage by members of classic US bands including Jason Cruz from California’s Strung Out and Lou Koller of NYC Hardcore legends Sick Of It All. Mike Peters and his sons – Dylan and Evan, made it onto the team of the Vans Warped Tour FC that featured members of Kneck Deep (who’s drummer Danny Washington appeared as a member of the Weapons of Happiness in Vinyl), Bless The Fall, Hands Like Houses, Fire Of The Gods and others with Evan Peters setting up Dylan Peters to score the winner in a closely fought match. 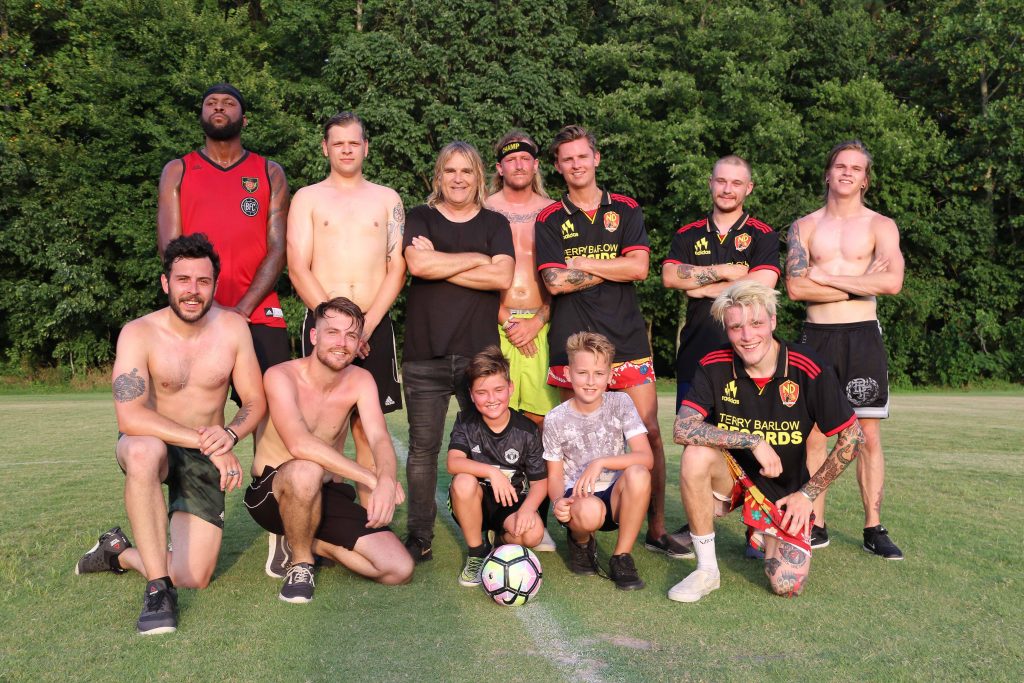 On Monday, Mike Peters will be in Annapolis for an interview at WRNR with the famous Bob Waugh before heading to Sirius XM for a live session on the contemporary eclectic rock channel The Loft which will be broadcast across the nation.

A Washington DC premiere of Man In the Camo Jacket premiere will be followed by a live acoustic performance at the Gibson Guitar HQ and then begins the serious business of the groups first headline shows.

Low ticket warnings have recently been issued for both Boston’s Once Ballroom and NYC Gramercy Theatre shows, so please don’t leave it to the last minute to book tickets. The concert at the Sellersville Theater in Sellersville, PA has now sold out. 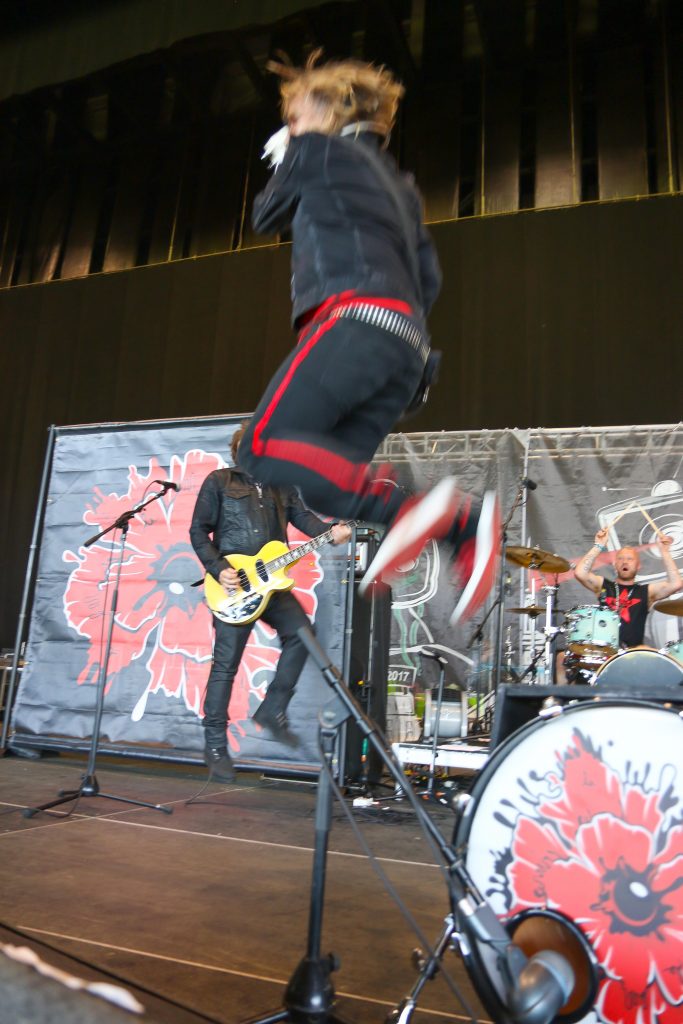 REVIEW: Veterans The Alarm, The Ataris among the many bands crowds ‘discovered’ at Warped Tour at Pavilion at Montage.

By John J. Moser of the Morning Call.

The Warped Tour has always been a place for the discovery of new music, and this year’s 23rd annual edition of the tour that stopped Monday at The Pavilion at Montage was no exception.

But this year that discovery element extended to two bands who made their mark in the 1980s and early 2000s – when the vast majority of those who attended Monday’s 50-act, day-long show weren’t born or were in their infancy.

The Ataris, despite having a gold album with 2003’s “So Long, Astoria” and a gold Top 20 hit with its cover of Don Henley’s “The Boys of Summer” (two achievements few, if any other bands at Warped could claim), had the unenviable task of opening one of Warped’s secondary stages Monday. 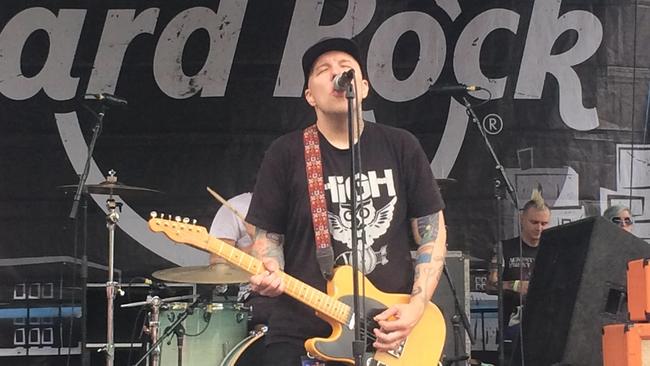 Kristopher Roe of The Ataris at The Warped Tour at The Pavilion at Montage in Scranton on Monday (JOHN J. MOSER/The Morning Call)

After the band opened with its 2003 breakthrough song “In This Diary,” singer Kristopher Roe introduced the second song, “Unopened Letter to the World,” by saying, “Once again, we’re a band called The Ataris, and this one’s from our “So Long, Astoria” album.

It’s an introduction that wouldn’t have been necessary a decade ago, but if it helped the Warped Tour crowd connect with the band, it was for the better.

But The Ataris’ music was good enough to do that. The sound on those first songs was as touching as it was when first released.

Roe, who at 40 is an elder statesman at Warped, introduced the song “The Heroes Die in This One” with the very adult explanation that it was his late father’s birthday and the song was written for him.

“Have the funnest, bestest day you can have today, because life is short,” he told the crowd before giving a really heartfelt performance, with intense vocals. That might not have been the usual sentiment of Warped, but the next song, “Your Boyfriend Sucks,” was.

The Ataris closed its too-short 18-minute, five-song set with “Boys of Summer” – Roe’s vocals a scream at the end. But the song was far closer to Henley’s version than the punky take The Ataris did almost 15 years ago – in a good way. If it was a discovery for the crowd, it was a good one.

Another classic band looking to be re-discovered at Warped was The Alarm, the Welsh post-punk/new wave rockers who had the Top 40 album “Strength” in 1985 and eight Top 40 Modern Rock singles that decade. 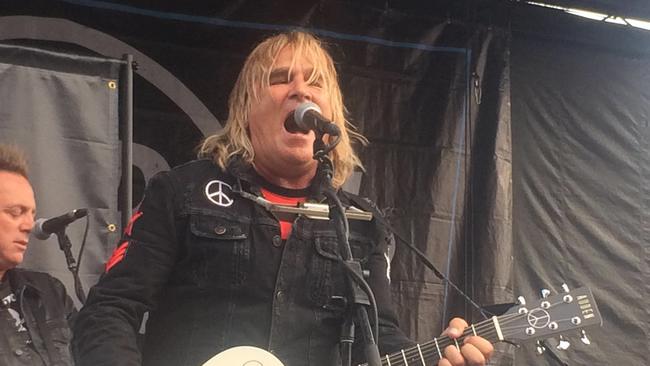 Mike Peters of The Alarm at The Warped Tour at The Pavilion at Montage in Scranton on Monday (JOHN J. MOSER/The Morning Call)

It put on a late-day set on the same stage as The Ataris, but as with The Ataris, its set was a reminder how good its music was, and why it needs to be rediscovered.

In a 26-minute set, singer Mike Peters – who like The Ataris’ Roe is the remaining original member, but who is backed by a band that has been The Alarm longer than the original lineup – strung together 11 songs that included all the hits, several as minute-or-so samples.

It was powerful stuff, with the opening “Marching On” melding into the U.S. breakthrough hit “Where Were You Hiding When the Storm Broke?” then a full version of the Top 40 hit “68 Guns.”

The songs were great in and of themselves, but the passionate presentation of Peters, 58, made them better, as he strummed his acoustic guitar with intent and occasionally played his neck-rack harmonica, alternating his singing into three microphones across the span of the stage.

Peters also played a handful of songs released after The Alarm’s run at the top: 2005’s “Without a Fight,” which addresses his battle with leukemia; 2009’s home-pride song “My Town”; and the earnest “Kill To Get What You Want (Die For What You Believe In).”

“45 RPM,” was driving and speedy – more punk than The Alarm was at its commercial peak. But the passion still was there.

It was a disappointment that The Alarm skipped perhaps it best song, “Blaze of Glory.” But that song talks about an ending, and the Warped Tour was clearly about a new beginning for The Alarm.

So it was appropriate the set finished with “Two Rivers,” with its lyrics “In the cool, cool water/We can wipe the slate clean.” And even more appropriate that the best newer song was the penultimate “Fightback,” a rallying cry that Peters introduced by saying, “You want to stay alive? You have to fight back.”