This summer, Mike Peters presents ‘The Alarm – Strength 2015 – 30th Anniversary Tour’ in New York at 6 very special shows at the legendary Iridum on Broadway. The first show has already ‘Sold Out’ in advance with only a last few tickets remaining for the second performance on July 25th.

Tickets for all remaining shows are all close to capacity and so fans intending to visit New York City for the these very special evenings are advised to purchase in advance as soon as possible to avoid disappointment. 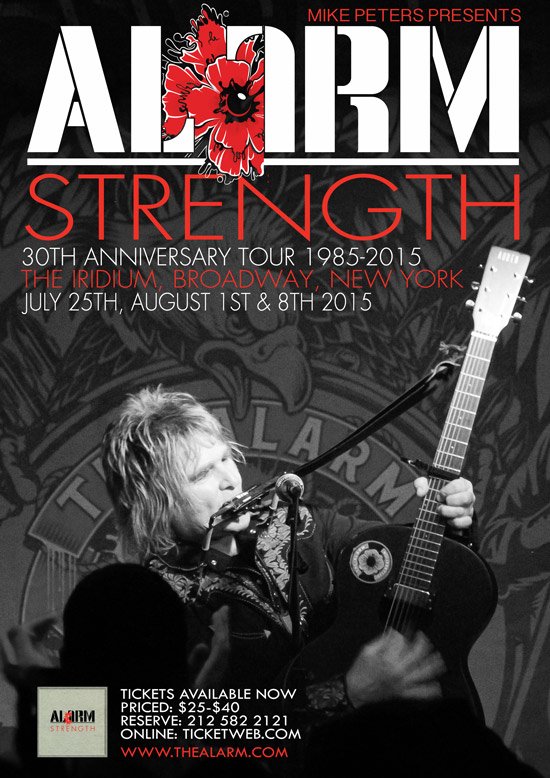 Following on from the success of last summer’s Broadway season at the Iridium, New York (which featured 6 sell outs), Mike Peters presents ‘The Alarm – Strength 2015’ featuring a core performance from the Alarm’s landmark ‘Strength’ album and the promise that each show will be made different with varied selections from ‘Strength’ through the ‘Spirit Of ’76’ and beyond ‘Into The Twenty First Century’.

This 6 show acoustic gathering promises a unique insight into the creative mindset and working practices of Mike Peters, the songwriter and musician.

On Saturday July 25th, both early (Sold Out), and late evening performances will focus on The Alarm’s ‘STRENGTH’ album of 1985, punctuated by a second set of songs from the Mike Peters / Alarm catalogue that complete the back story to this most important era in Alarm History. Tickets Available Here.

A week later on Saturday 1st August, Mike Peters will perform set lists once again based on the ‘STRENGTH’ era timeline but focused on the Alarm’s historic ‘Spirit Of ’86’ concert performance at UCLA in front of 26,000 fans which made history as the first ever ‘Iive’ global TV satellite broadcast to a worldwide audience of millions.  Tickets Available Here.

The concluding pair of shows on Saturday August 8th will feature set lists made up from requests solicited from audience members in attendance and in advance of taking to the stage. From ‘Declaration’, ‘Strength’ and ‘Raw’ via ‘Breathe’, ‘Feel Free’ and ‘Rise’ and onwards through ‘Under Attack’ and ‘Into The Poppy Fields’ to create a career retrospective encompassing all eras of Mike’s extensive songbook from 1981 to the present day.  Tickets Available Here.

Tickets for Mike Peters – Strength at The Iridium are on sale now.