Rocker Mike Peters scaled the heights at the weekend to perform at the summit of Wales’ highest peak to raise funds for those who are helping him beat cancer. 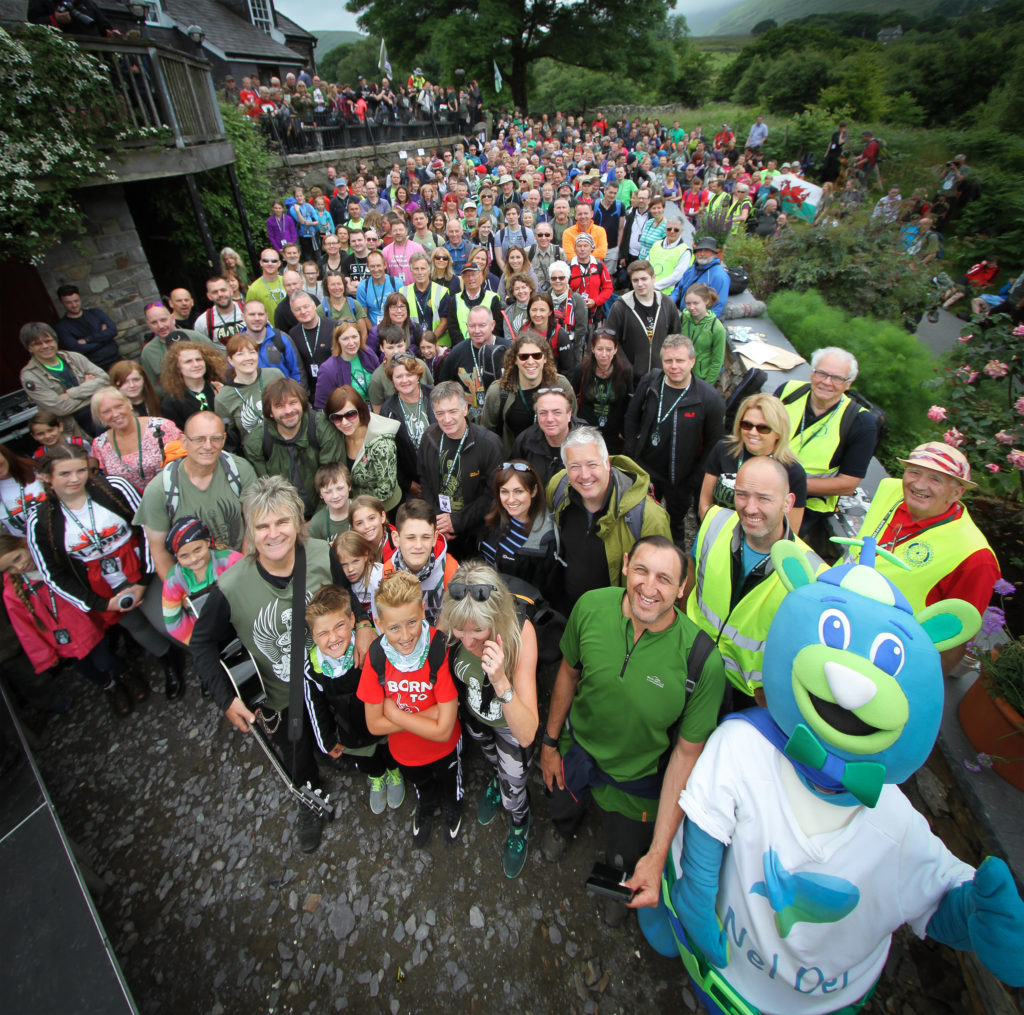 The Alarm frontman led around 600 hikers, musicians, friends, hospital staff, cancer patients and celebrities on the climb to the summit on Saturday to raise funds for the Love Hope Strength and Awyr Las charities.

Snowdon Rocks started with speeches and a song from Mike at the Penceunant cafe at the foot of the Llanberis path before the stirring sounds of the Cambria Marching Band set them off on their journey to the summit. 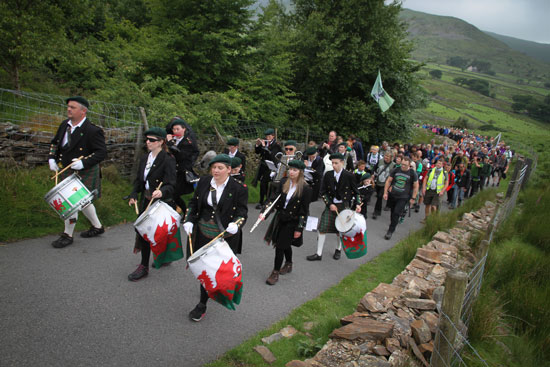 A remembrance ceremony and musical stop was held along the way at the Halfway House Cafe with Mike being joined by band mate James Stevenson, Snowdon Rocks favourite Chris Summerill and guitar playing fans and friends. 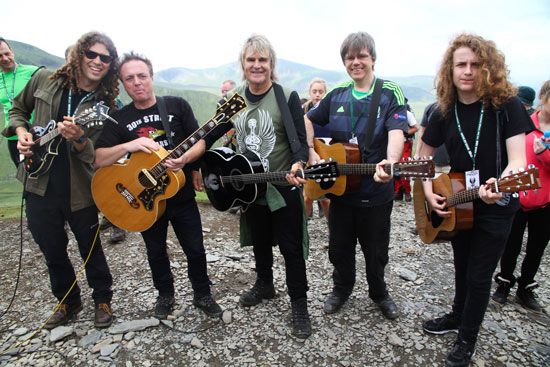 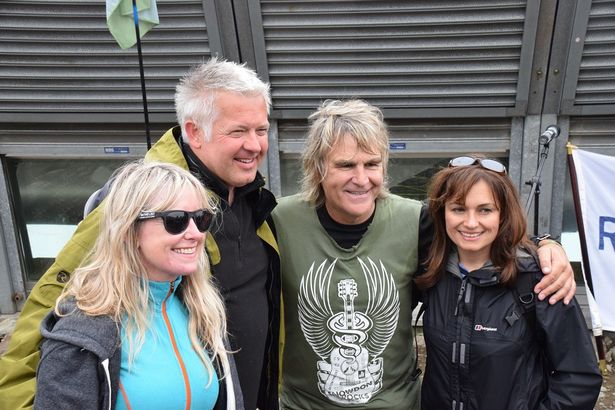 Among the crowd were Alarm fans from Norway, Italy and the United States. 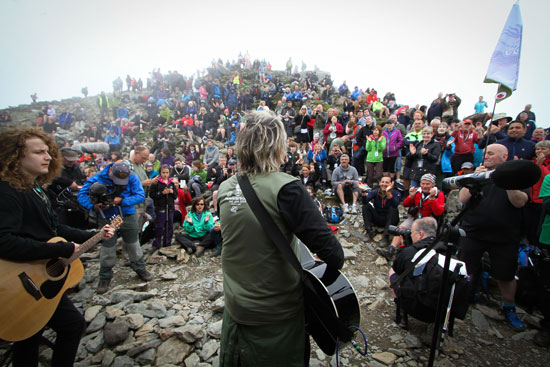 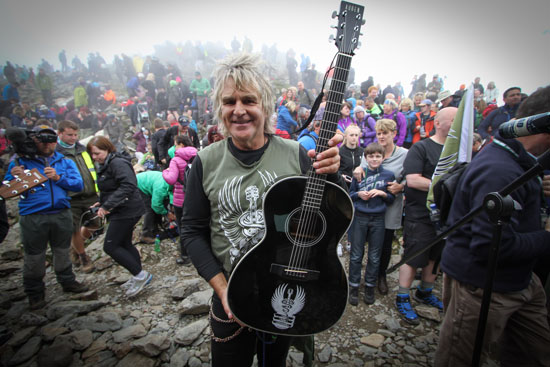 The 57-year-old revealed he is fighting cancer for a third time last autumn .

Just days after last year’s Snowdon Rocks he went to Ysbyty Gwynedd, Bangor for a routine check-up where doctors found the disease had returned.

Mike, who was first diagnosed with cancer in 1996 when he was diagnosed with lymphoma, was afflicted with Chronic Lymphocytic Leukemia in 2005 but with treatment he has kept the condition in remission – until now. 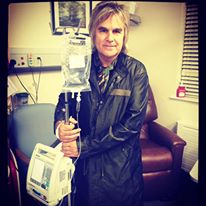 He said: “I’m still on Oral Chemotherapy every day and I administer it to myself every morning and even take it at night just before I go on stage.

“It’s amazing to think how far advanced these new treatments have become since I first had to face up to a life of living with cancer.

“This new oral chemotherapy Idelalisib allows me to do exactly that “live” with cancer and therefore still be able to dream and plan for the future with my family.”

Jules said: “Earlier this week we were at Ysbyty Gwynedd where Mike received his monthly infusion of the life-saving drugs.

“We sat in the very same ward, next to the very same bed, where Mike was admitted almost 10 years ago with alarm bells ringing in our ears.

“We were scared, frightened but amidst all of the fear, we knew one thing. That we wanted to give back.

“Looking out of the window, at that bleak and terrifying time, we pledged to climb Snowdon and raise monies for the hospitals in North Wales that had given us so much love hope and strength.

“I never dreamed in a million years that 10 years on, we would be taking hundreds of trekkers up our highest mountain in the name of Love Hope and Strength .”

An Awyr Las spokesman said Saturday’s event also included a free gig at the Heights in Llanberis featuring Mike and several other emerging Welsh bands and singers. The £45,000 raised will help buy new equipment for the hospitals. 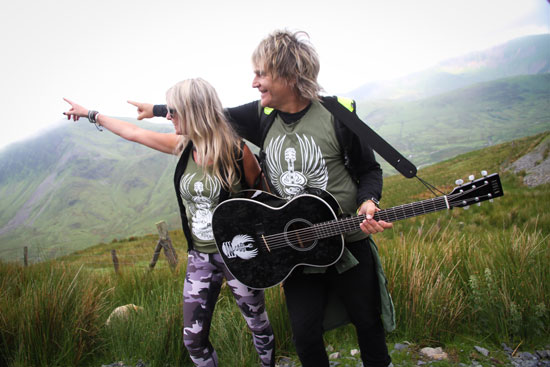 Snowdon Rocks will take place again in 2017 on Saturday June 24th and will mark the finale of Mike Peters 351120 Walk Across North Wales. Visit www.byyoursideappeal.org for further information.