Pledge Peace For The Holy Land. 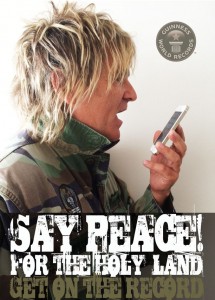 A lot of people have written to thealarm.com asking how they can become part of ‘The Scriptures’ world breaking team without having to create lyrics, sing or play music and so we have come up with a very simple ‘Pledge for Peace’.

It’s easy to do, just take out your cell phone and locate the voice recording app.

Record yourself saying ‘Peace’ and speak your name clearly afterwards.

Go to The Scriptures / pledgemusic.com campaign and once you have placed your ‘pledge for peace’ send the recording to the email address displayed.

Your contribution will be added to The Scriptures master recording at the point where the lyrics say “and all the people in the world who want peace say Peace! PEACE!“

All who say ‘Peace’ will also have their name included in the recording credits of The Scriptures CD Booklet and be officially recognised as part of the world record breaking team (which is why we need you to speak your name after saying Peace).

Proceeds of this campaign will go to Dr. Amal’s stem cell donor registry in the Holy Land which (despite a severe lack of funding), is working to save lives and build bridges of peace throughout the Middle East.

By locating potentially life saving matches amongst Jews and Arabs alike, Dr. Amal’s work has the potential to bring people together from all sides of the conflict and even benefit members of our own communities who suffer from blood cancers like Leukaemia.  Dr. Amal has already registered over 20,000 individuals to the international registry and located some 20 life saving matches not only for people in the Holy Land but further afield in the USA and Europe too.

‘The Scriptures’ world record breaking campaign is still allowing Love Hope Strength to show support for this most vital work and in two weeks the campaign has already broken the fund-raising target we initially set as our goal so once again, thank you to all who have pledged their support so far.