News Feed
My name is Martin Flemming and I got involved into the Alarm back in 1988… (I know – very late)
I am from Germany and when I was 18 I lived in Hannover and completed my education at this time and started my career as a professional ice hockey player. A team mate gave me the vinyl album of a band called “The Alarm” and said “You have to listen to these guys – they are great!” I have done what I was told and the first song I heard was “Rescue Me” from “Electric Folklore Live” and since then I was hooked. I recorded the LP on a cassette (the most of you will remember – that’s how we have done it back in the late ‘80s) and in my car and at home I was listening to The Alarm. Also the hockey team was listening to “Electric Folklore” in the dressing room.
During my education I had to travel a lot to Bremen where I first met Mike and the Alarm live. We lived very close to the venue “Aladin” where The Alarm had a gig – it was 1998 when I saw the first time The Alarm and Mike Peters live.  Don’t ask me why and how I got on the guest list, but I guess it was because of the Band who supported the Alarm. I stood in the front row with my mates and it was an incredible feeling to see Mike, Dave, Eddie and Twist live… After the gig I met Mike at the tour bus and he signed my shirt (the classic Poppy Shirt – and I still have it). I was the luckiest man on earth. 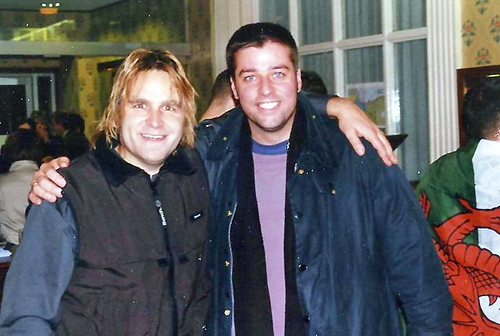 A year later I saw Mike and The Alarm in Hannover at the Capitol and this was the time my girlfriend Sabine was introduced to the music of The Alarm. Of course she had to listen to all the albums I have bought since then (Standards, Declaration & Strength, …) and two days later we travelled to Bremen to see The Alarm again in Bremen at the Aladin. I felt like a groupie but I was proud of it and still I am.
I was really shocked when I heard Mike left the band but I always believed in the music and I believed in Mike Peters. One day I found “Mike Peters And The Poets” with “Back Into The System” in a record store and I searched the internet. During this time I lived in Salzgitter where I have met Chrissy (the merchandise queen) and she told me about the Gathering and that Mike is still making music and touring around the UK. At last my mom (I am still thankful) gave me as a Christmas present 2 tickets for The Gathering 8. Again I was the luckiest man on earth. I travelled with my brother to Llandudno to see Mike live again and for me it was the best Gathering ever (because it was my 1st). I also took my first picture with Mike and I was the proudest man alive – I still have the picture and I will always keep it for sure.
Since then I travelled year by year to The Gathering (except one) to celebrate the music of Mike and The Alarm. Even my 3 boys and my wife Sabine (Thank you and I love you), my mom, my brothers and my mother in law went with me.
Of course I went to the 20th Anniversary Show in Rhyl, participated at Snowdon Rocks events, Rhondda Rocks and also visited Mike and The Alarm (also Big Country) in Germany.  The Alarm and Mike Peters is the soundtrack of my life and in some cases the music helped me to be “The Road”, to “Cross the River”, to be “High On The Hill” to be “Spiritual” to “Marching On”, to “Walk Forever On (Sabine’s) side” to “ Lead Me Through The Darkness” and to keep “Moments In Time”… 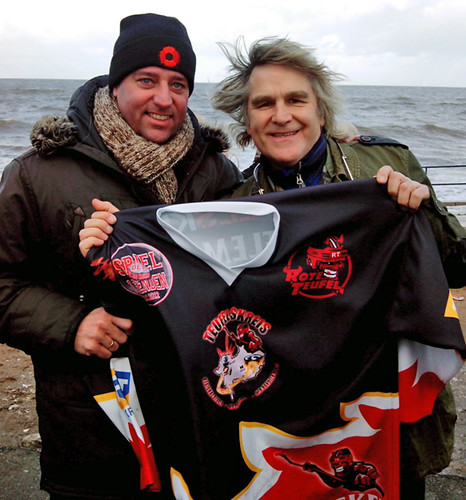 It is always a great pleasure to see Mike and his band mates and his family in their country and their hometown – and it would be a great pleasure to bring all of them to my hometown Bad Nauheim. I want to make my dream come true and I will keep on working on it “until the day I die”…

Keep On Rocking and Free Rock And Roll,

with Sabine, Florian, Nils and Luis