News Feed
In 1984 a friend lent me an album. On the cover were four spiky-haired, punk-looking young men.  I didn’t have (nor have ever had) spiky hair. I didn’t really like (and still don’t to be honest) punk. I listened to the album. 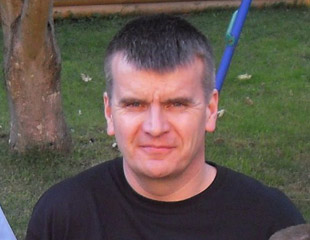 “Take this song of freedom, put it on and arm yourself for the fight. Our hearts must have the courage to keep on marching on and on.”

How could a 13-year-old lad not fail to be inspired by lyrics like this to an opening song? I then listened to it again…and again…and again…and I’ve never really stopped listening to it since. The album was Declaration…and the music of Mike Peters and The Alarm has now been a major part of my life for the past 28 years.
How can you explain in just a few words (I promised Jules 300 or less) the influence that the music of one band and, in particular, one man has had on your very existence, even to those who get it, let alone those who don’t?

But that’s the point – it’s not just about the music.

It’s about the fact that, during some of the lowest moments of their lives, the Peters/Jones family opened their hearts and souls to their wider family and allowed us to share their struggles for life itself…and rejoiced with us when they were overcome.
It’s about the sense of belonging to something much bigger.

It’s about the fact you can ring the band’s management and talk to a real person…not just about the music but about what you’re experiencing in your own life at that moment.

It’s about the fact that my father (not a fan by any stretch of the imagination, wrong generation) can call MPO HQ every Christmas to satisfy the gift requirements of his son (who really should know better by now) and pick up his conversation with Peter from 12 months earlier as if they’re the best of friends.

It’s about the fact that in 1996 I met my musical hero through my professional life…and discovered that he’s a genuinely top bloke and have remained in touch ever since.

No barricades, the door is open, everyone is welcome.

More than 300 words so far…sorry Jules, it was never going to happen.

And then, of course, there is the music. Not just an album every five years followed by a world tour in vast impersonal amphitheaters (Ticket, sir? No problem. £65 please). It’s the continual stream of creativity which never ceases to amaze, seemingly always showcasing the art out on the road, asking the family whether they approve or not – and it always does, without fail. But it’s not just a concert which we go to, it’s an event (dare I say a gathering?) in itself, up close and personal, the main attraction getting closer to his audience than anyone else in the otherwise cynical, here-and-now, overnight-success-driven world which is the music business. It’s rock and roll the way that rock and roll was meant to be…whether with your own band, or by fronting another one when you’ve nothing else much on!

It’s about memories – the first time you witnessed and experienced the art for yourself. Mike on his own, unannounced until the last minute, in the Big Top at the Greenbelt Festival, a one-man show where every health and safety rule was broken, where the fire regulations weren’t worth the paper they were written on. The singer so overwhelmed by the response that he promises to bring the whole band back the following year. Not a hollow promise, a binding contract with the family…and return they did.

And, yes, it’s about a little heartbreak as well – the original band going their separate ways after the now infamous Brixton concert. To someone like myself who goes back as far (although nowhere near as far as some) as Declaration, there will never be anything quite like the original four going full throttle on stage. As Dave said in Bands Reunited, nothing could touch The Alarm on the road in those halcyon days. Yet without the heartbreak, we wouldn’t have had the glorious present and the promise of more to come.

“The price is high and it’s got to be paid. For everyone who survives there are many who fail.”

But most of all….

It’s about Love, Hope and Strength.