The Alarm are joining forces with the Love Hope Strength USA on November 3rd and 4th 2018, in Denver, Colorado, to host a festival of Love, Hope and Strength themed music concerts and film showings, that will celebrate and support the life saving achievements of the charity that took it’s name from co-founder and cancer survivor Mike Peters’ classic Alarm song ‘Strength’.

With over 170,000 people registered to the international bone marrow registry and some 3,500 lives potentially saved, The Love Hope Strength Festival weekend will feature a finale concert at The Oriental Theatre (Sunday November 4th), by Welsh Rock band The Alarm, who will present some of their best known songs alongside music from the brand new and critically acclaimed album ‘’Equals’.

The weekend will also feature a Mike Peters acoustic ‘solo’ performance at Denver’s ‘Streets Of London’ (Saturday November 3rd), and a special screening of the award winning movie Man In The Camo Jacket (November 4th at the Oriental Theater), which tells the incredible story of both The Alarm and Love Hope Strength.

The Love Hope Strength Music And Film Festival weekend will begin on Saturday November 3rd with a special Saturday evening concert at the Streets of London which will feature an intimate Mike Peters / Alarm acoustic performance that will Incorporate classic Alarm songs and stories intertwined with tales and recollections of Love Hope Strength adventures on Mt. Everest, Kilimanjaro, Snowdon and the forthcoming Rock The Canyons challenge.

Sunday morning will provide LHS supporters and Alarm fans alike, with an opportunity to see the award winning Man In The Camo Jacket Movie which will also feature a Love Hope Strength award ceremony alongside a Q&A session with LHS team members and founders.

Sunday night November 4th at the Oriental Theater, will be the setting for a celebratory and full band electric concert performance with The Alarm, who will be playing all their classic hits such as ‘Strength’, ‘Spirit Of ‘76’, ‘The Stand’, ‘Sixty Eight Guns’ and more….

Throughout the entire weekend, there will be opportunities to win signed Guitars and other auction items along with special guest appearances and other surprises.

All in all, this one of a kind Love Hope Strength Music and Film Festival Weekend with special guests Mike Peters and The Alarm, promises to be a highly charged and emotional event offering a rare opportunity to take part in something truly special. So don’t delay, order your tickets when they go on sale exclusively to LHS supporters first on July 20th.

Limited Edition Weekend Passes will available for all the events alongside a Sunday night ‘Alarm Concert’ only ticket. 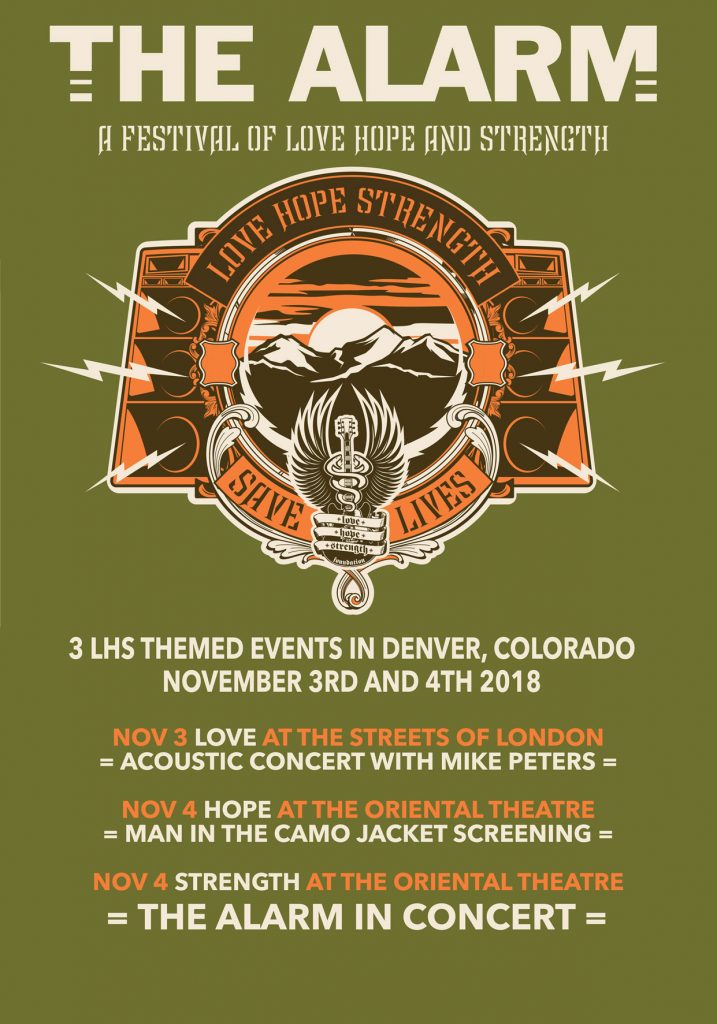