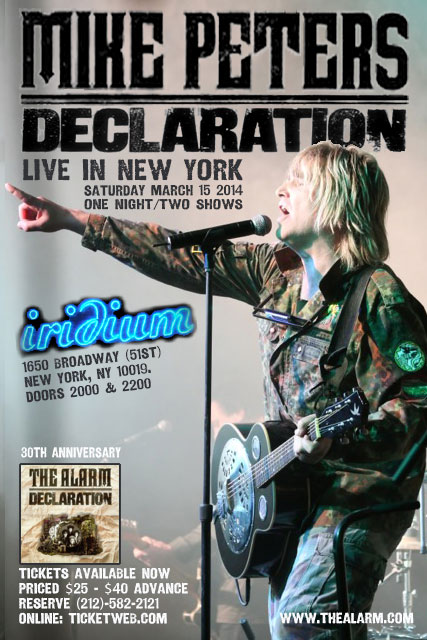 A unique one man band ‘Alarm’ show in New York by lead singer / songwriter Mike Peters will present the album in a contemporary setting with performance, stories and images to highlight the impact that this album had on the decade it was born in, and its ongoing relevance, as Mike Peters continues his personal fight against cancer with the Love Hope Strength Foundation ‘Saving lives – One Concert At A Time’.

The album itself, was a pioneering mix of protest punk, folk, americana and stadium rock as described by US reviewer Jim Connely in 1984’s Dead Air Diary “While a lot of bands have tried to combine the ’60s and ’70s, none of them have been as successful as The Alarm. Musically, their secret is that they draw on Punk and then temper it with an acoustic sound while avoiding the wimpiness usually associated with folk. Lyrically, it works because they avoid Punk nihilism and concentrate more on positive personal politics. This is rock and roll at its very finest and U2, R.E.M. and the rest are going to have to work very hard to top it”.

Also on sale at the Iridium box office