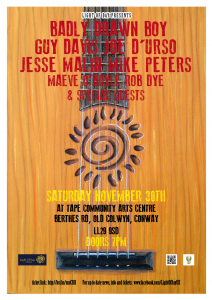 Badly Drawn Boy – or Damon Gough to use his real name, is Lancashire’s answer to Folk Americana – his own music style has achieved critical acclaim….along with the occasional tantrum and tambourine throwing when the audience don’t pay attention! Gough plays a variety of instruments to accompany his vocals – so expect guitar, keyboards, banjo, clavinet – and anything else he can get his hands on to entertain.

Mike Peters has performed at the Light Of Day (Wales), concert over the last few years and it was at one of these events a few years back the Mike heard Willie Nile performing ‘One Guitar’ for the first time.

Jesse Malin has recorded with Bruce Springsteen and Ryan Adams – amongst others. Another Light of Day favourite, Jesse makes a welcome return to this annual event – and with a new album pencilled for release in 2014, listen out for a batch of new tunes from this favourite song-smith.

Guy Davis plays some of the coolest acoustic blues you will ever hear – and with influences from Skip James through to Taj Mahal, he has the credentials and experience to be right up there with the greats. Davis has even acted off Broadway as the legendary Robert Johnson – so no greater ‘Crossroads’ accolade is needed!

Joe D’Urso makes a welcome return to North Wales – taking a break from his latest recording work with Stone Caravan in New York. where he has been collaborating with Willie Nile and [Little] Steven Van Zandt. Joe will be singing his new songs – as well as old favourites to get the house rocking in his inimitable style.

There will be special guests on the night – including Maeve O’Boyle and Rob Dye – so get your tickets early for a 7pm kick-off on Saturday November 30th at TAPE Community Arts Centre, Berthes Road, Old Colwyn. This will be a evening jam packed with top musicians – taking to the stage together and joining in with each others music in a songwriters circle. The concert will benefit both Light Of Day and Love Hope Strength Foundation. 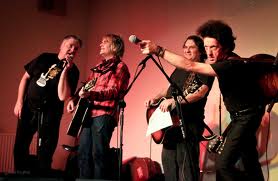 “I want to wish Bob Benjamin, all of the musicians, and all my friends who are attending the Light of Day shows the very best for a great series of concerts….. I just wanted to give a shout out to Bob, Joe and all the musicians who make it such a great night.”