We are pleased to announce that James Stevenson, Smiley and Craig Adams will be performing selections from their solo albums on the Saturday evening of The Gathering.

They will be joined by Alarm keyboard player Mark Taylor and other special guests. 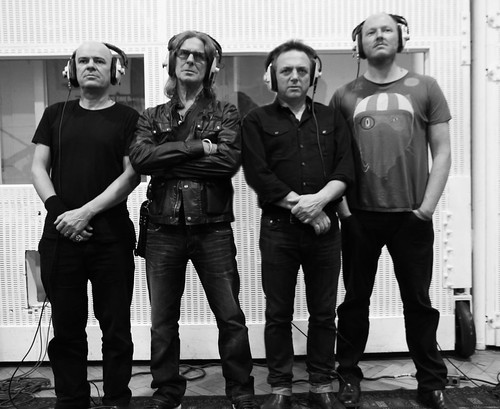 JAMES STEVENSON – EVERYTHING’S GETTING CLOSER TO BEING OVER
All I ever wanted to be was a sideman. My heroes were sidemen, not frontmen. I wanted to support the singer, play the perfect guitar part for the song, back him up when needed and I’ve been lucky enough to work alongside some of the very best. From Mikey – to Billy Idol and Ian Astbury to name just a few (not forgetting the legendary Gene October of course!) But then I made a solo album I’m very proud of. So now I have to bite the bullet, put my money where my mouth is, and sing my own songs live. Front a band for the very first time. Sing lead vocals live for the very first time (well actually I did sing Virginia Plain at a Children Of The Revolution gig once!). The Gathering 2015 will be the very first time I’ve ever done it! I’m excited, and nervous as hell! But I’ll have some of the best in the biz to help me along, including Alarm bandmates and great mates Craig Adams, Smiley and Mark Taylor and if anyone can help me pull it off they can! See you Saturday night….

SMILEYS FRIENDS IN FAR OUT PLACES
I was very excited to hear the plan to perform tracks from Craigs, James and my solo albums.. I hadn’t any real plans to perform the tracks live so after a bit of thought I decided to put a slightly different line up together…So as well as Craig and Mark Ive decided to use our old friend and Alarm fan Jan Havard Melsaeter on drums..after I saw him play on the Scriptures track at Abbey Road.. That means I get to stand at the front and sing a bit.. I also decided to bring in the fabulous QTheMusic duo of Kerry Schultz & David D’Andrade.. so we can perform the track Hide & Seek which is a bit of a Bond theme.. The album itself features a host of guests..including Bruce Foxton From The Jam, Richard Archer from Hard Fi & Martin Coogan from The Mock Turtles.. hence the Friends In Far Out Places… Mike is on it too so all Ive got to do now is bribe him to get up with us.. We will perform 3 tracks from the album…It should be a great warm up for that Welsh band on after us..
So see you soon.
“Its the best album of 2014”…Alan Thompson BBC Radio Wales

CRAIG ADAMS – DEMON KING
Demon King is the first solo album by Craig, and produced by Mark Kelly. Craig initially had the idea of recording some solo tracks in the mid-nineties, and started working on some demos with Tim Bricheno. Julianne Regan was drafted in for vocals on one of the songs, but nothing came of the project. The right time for an album came 15 years later when the 25th Anniversary of The Mission came around, and Craig finally had the time to do it. The album is an excellent summing-up of the relationship with post-punk music that Craig has had since the early eighties. Ten tracks of extraordinary Pathos, balanced between Joy Division-like noir nostalgia and other desolate faraway landscapes characterised by the magnetic pulsating of the bass. Produced with Mike Kelly, Demon King also features the expert hands of friends, Kirk Brandon and James Stevenson.