Almost 30 years to the day since the album Declaration was released, Mike Peters found himself once more inside the 02 Academy and was greeted by all who wouldn’t let a rainstorm get in the way of listening to one of the greats of British Rock. Not greeted, lauded perhaps would be a better word, even praised and rightly so.

The Alarm released their debut album to great acclaim in 1984, a time of political upheaval, of strife, neglect and bitterness, nothing has changed. The self styled political Queen of the time may be dead but the legacy rumbles on and on. Mike Peters though, a little older, battle hardened, a survivor, is still with us, he still has the power to raise a fist to the air and will do in the minds of all who has ever watched him perform, forever.

With an evening split into two halves, one of favourites from a long distinguished career, the other of the songs that made up Declaration, Mike Peters stood on the stage at the 02 Academy and proceeded to take the audience on a journey through time. What has been great over the years is the ever increasing amount of young adults that find their way to one of Mr. Peter’s gigs. Where a lot of bands start to struggle is that their core audience grows up with them, they grow old together. Not so these days for the band that put Welsh Rock on the map in the early 1980s, these days you can look around and see a 50 year old man being flanked by at least two young adults, all three with their fist striking through the air and pumped in time together. It is heartening and somewhat beautiful to encounter.

With tracks such as Deeside, Walk Forever By My Side and 45 R.P.M. all being enjoyed in the first half, it was no wonder that all in the hall needed a break after a while. The slight interruption though only served notice for a smashing and more modern version of Declarationto be played. Just Mike and his instrument, his weapon of choice…after all for many years he has sang that all he needs is one guitar.

For thirty years audiences have heard all the songs from the album played roughly the same way. They remain so well loved that for many perhaps they shouldn’t be messed around with, changed to suit the times even. However this was a new Declaration, a proclamation of determined resolve. Kicking off with the first ever song the band played live from the album,Shout To Devil, the spectators felt the newness creep through and it was like seeing the sun again after a month of darkness. Every song followed suit, From Tell Me, the perhaps topicalHowling Wind, the enlarged 68 Guns which blew everybody away and The Deceiver, which took on a more melancholic edge, a more reflective note in Mike Peters voice as he sang the lyrics which perhaps meant more than usual, the survivor who keeps on entertaining and being so wonderfully honest about it all.

Blaze of Glory is one of the most highly anticipated songs that The Alarm created. No matter how many times it is performed, it manages to send a shiver of excitement, a slight tremble of exhilaration and the slight edge of fear for the future down the spine of anybody caught in its musical wake. On a night where Mike Peters seemed to give even more than usual to the crowd, the reverberation and echoing that the man who gave The Alarm its distinctive voice managed to capture filled the hall with the sound of all who had come to watch him perform. It was powerful, formidable, the comprehensive cry of what seemed thousands upon thousands willing to be set free; to have the voice in the darkness and be recognised.

The emotion of the night certainly got to the audience as they gave the usual retort of ‘Going out in a Blaze of Glory’ over and over again. That emotion though was not just felt by the crowd inside the 02 Academy, it was etched into the face of a man who realised, perhaps even for the first time, just exactly what he had started 30 years ago. A declaration of intent that had been recorded and pressed, packaged and loved had all come down to this, Mike Peters on stage in a city that adores him as if he was one of their own and with an audience willing to brave all that Mother Nature could throw at them, all so they could say thank you.

A declaration it may have been but it is a testimony to, not just to one of the great frontmen of his time, but to the album in which all had come to honour, 30 years, the first night of a new tour, Declaration stands out as one most exciting and pivotal albums of the 1980s. Just sheer class! 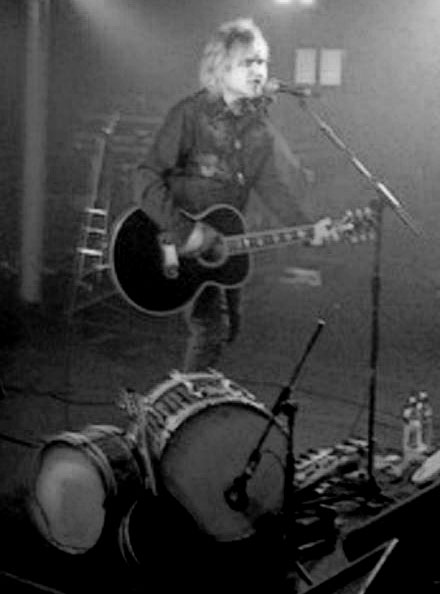