The Infamous Dead Men Walking will once again tread the boards in California, USA this September 14th with a one off show at the world famous Troubadour in West Hollywood. Tickets On Sale Here.

This time out the line up will feature Slim Jim Phantom (Stray Cats), Captain Sensible (The Damned) and our own Mike Peters of The Alarm alongside debutants Duff McKagan of Guns N’ Roses, Chris Cheney from Australian rock band The Living End and Saturday Night Live Alumni Fred Armisen who is also the star of hit US TV show Portlandia.

News about the return of the Dead Men has caused quite a stir in the USA and the Troubadour show is already the talk of the town in Los Angeles with news items appearing all over the net and in print including the LA Times. 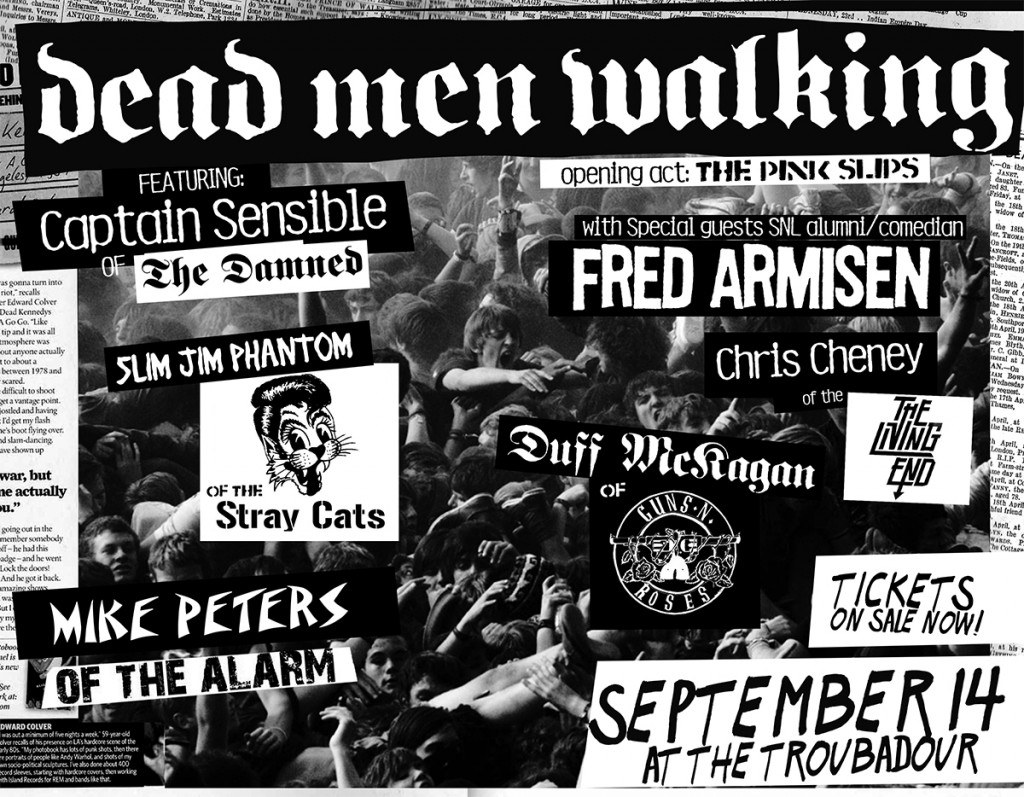 In years past The Dead Men Walking has featured such illuminaries as Kirk Brandon (Spear Of Destiny), Pete Wylie (Mighty Wah!), Glen Matlock (Sex Pistols), Bruce Watson (Big Country) and Billy Duffy of The Cult with one off guest appearances from Mick Jones (The Clash), Topper Headon (The Clash), Brian Setzer (Stray Cats) and Lemmy from Motörhead all taking place  at various times and cities across the globe between Los Angeles and London.

“Without The Damned, Stray Cats and The Alarm, we most certainly wouldn’t have modern alternative rock. And one of the most influential rock bands of all time, Guns N’ Roses, may not have been the same if it weren’t for Duff McKagan’s punk roots, a direct result of Dead Man Walking band mates Captain Sensible, Slim Jim and Mike Peters. Naturally, they all became friends over time and what better way to connect than to do what they all do best—play music!  Now enter Fred Armisen. In a 2014 Entertainment Weekly piece on his favorite cult records, the Saturday Night Live alum and Portlandia star counts The Damned as one of his all time favorite bands. He grew up listening to cult classics from The Damned, The Stray Cats, The Alarm, Velvet Revolver, Guns N’ Roses and more. Fred even created a character in the likeness of all of his musical heroes, the undeniably charming and hilarious British punker Ian Rubbish. Together, they form Dead Man Walking, living proof that punk has truly stood the test of time and continues to inspire new generations every single day. It’s no longer just sub-culture – it’s OUR culture.”

Watch this space as rumours of more shows are already circulating.